Phil Seguin was sitting in math class, thinking typical math class thoughts—which, in his words, is thinking about anything but math.

It was February, and he remembered that when he graduated high school he had promised himself he would play post-secondary baseball. But there he was, in his second year out of high school, sitting in class at the University of Ontario Institute of Technology (UOIT), a school that did not even have a team.

So, he emailed Ben Rich, the founder and head coach of Ryerson’s baseball team.

“I’m a really enthusiastic shortstop, and I’m pretty good,” he wrote. “You should see me play.”

With six of the 27 players who make up the Rams baseball team graduating and moving on after the 2017 season, Rich needed to fill his roster with rookies. That way, they could learn from the team’s veterans, and take over come next season.

Seguin, 20, and Aidan Dolan, 18, are two of the seven freshmen who moved in to try and fill those cleats. Though they have a ways to go, the two recruits showed promise in a 2017 regular season where Ryerson finished in second last place in Ontario University Athletics (OUA), with a 5-11 record.

Just like every team in Ontario University Athletics (OUA), the Rams qualified for the 2017 playoffs. Participating in the postseason should only help the Rams’ rookies continue to develop once they hit the field in a winner-takes-all format starting on Oct. 13.

“This has been one of the deeper contingents of rookies we’ve ever had,” said Rich. “That is both in terms of new players and also the quality of those players.” 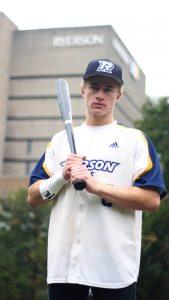 Seguin grew up in the very southwest point of Prince Edward County, Ont., where there are only softball diamonds within a 45-minute drive. When he was 10, Seguin started playing on a scraped-together softball team made up of kids the coaches poached from the soccer and ball hockey teams. He fell in love with the sport immediately, and was playing hardball at 11.

From Grade 10 to 12, Seguin’s high school team made it to OFSAA, a provincial championship, the only team in the region to do so three years running.

He took a gap year following high school, taking online courses to get his grades up so that he could get into university. He was part of the Quinte Royals Minor Baseball program in Belleville, Ont., that year, playing in the Eastern Ontario Baseball Association. He also started his own business—Wraps Performance—designing and selling adjustable sweatbands.

When his grades improved, he got accepted to and attended UOIT the following year. He didn’t play baseball at all that year.

Seguin was recruited to fill the hole at shortstop, a move that allowed Rams position player-pitcher hybrid Jeremias Sucré to shift back over to his natural position at third.

But despite his skill, the shortstop came up short of his own expectations while going through some common growing pains throughout his rookie year.

Seguin played 12 games and finished the regular season batting .189. More significantly, he made 10 errors at short, tied with teammate Kyle Conquer for the most in the OUA.

“I don’t think I’m back where I was two years ago, in terms of my quality of baseball and my confidence,” Seguin said.

Yet jaw-dropping plays have become almost expected for Seguin, particularly those that showcase his ability to leap off the ground to snag high line drives.

Dolan remembers one such play fondly.

Growing up in southside Chicago, Dolan began playing baseball when he was three. His dad, though a ballplayer himself in high school, wanted Dolan to keep up the family tradition of hockey. But flat feet and the threat of broken ankles had the doctor forbidding him from lacing up his skates.

Baseball did not go his way either, until he started becoming a decent pitcher at age 10. His breakout hitting season came two years later. Even though he always imagined himself as a pitcher, Dolan could not deny his uncanny skill of seeing the ball and breaking down a swing. 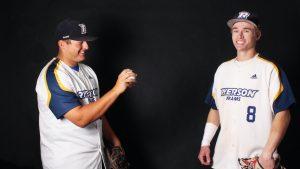 He attended high school in Buffalo Grove, just north of Chicago. On defence, Dolan mostly played first base, but due to one rough hitting year, he was moved to the bullpen. His only plate appearances in his senior year came while pinch hitting.

“I like pitching in the sense that you can be more successful. In hitting, you fail more than you succeed,” said Dolan.

In Grade 11, Dolan came to Toronto for vacation. His mom suggested he check out the universities in town, and he managed to catch the last of the November campus tours at Ryerson. He sent an email to Rich introducing himself and attaching a video of his stuff, and Rich invited him back out in March for a workout. He offered Dolan a spot right there. Until then, Dolan had received DIII and DII NCAA junior college offers.

“I was thinking that if I’d be playing baseball in a small school, I’d love to go international,” said Dolan.

Though Dolan was recruited as a first baseman, it was his hitting that caught Rich’s attention.

“He has a quiet, yet powerful swing,” said Rich. “He shows the ability to hit for power and average.”

Dolan ended up pacing all Rams rookies with a .235 batting average. He also made it on base a third of the times he was up to bat, striking out only twice in his first 20 plate appearances.

“I’ve been seeing the ball well and I don’t really strike out that often,” he said.

In his last four games, however, he tacked on five more strikeouts to that total.

“The velocity is a huge difference [from high school ball],” Dolan said. “Guys just constantly throwing mid- to high-80s, with good control and good breaking stuff right behind it.”

Of the three home runs the Rams hit this season, two of them came off rookies’ bats. Both were hit on the same day. Anthony Fera hit one, and Dolan hit the other.

Dolan’s homer came on Sept. 16 amidst a 14-4 pummeling courtesy of the Queen’s Gaels. Dolan had two hits and three RBI that game. The home run came after Queen’s scored seven runs on them in the previous frame. But Dolan didn’t see his shot clear the fence.

“(Rams teammate) RJ [Mienkowski], up before me, hit a shot and he thought it was going out – so he was gazing at it, and it hit off the wall and he almost got thrown out a second,” Dolan recalled. “So, when I hit mine, I didn’t actually look at it, I just put my head down and ran as fast as I could because I didn’t want to look like [Mienkowski], like a fool.” 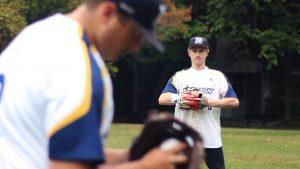 Peek into Dolan’s apartment in the Stockyards on game day, and you’ll find him listening to inspirational speeches—most likely Herb Brooks’ 1980 “Miracle on Ice” speech. He’ll be at Stan Wadlow Park before any of his teammates, at least two and half hours before game time, checking on the mound, getting used to the batter’s box and taking dry hacks while visualizing the game ahead of him.

Meanwhile, at Ryerson’s student residences, Seguin already got all his stuff ready the night before. He is thinking about whether he had the right mindset during the last game. Was he standing at short hoping the ball wouldn’t get to him because he wasn’t ready for the play? Or was he eager for the ball and confident he could get his team that big out?

“It’s crazy the kind of effect a mindset has on a team,” Seguin said. “And it’s tough, because it’s not a tangible skill.”

Dolan talks about being an all-star one day. Seguin says he won’t stop until he’s batting .400. According to Rich, his guys are eager learners. These rookies know they can bring something to the team, and amid growing pains, they’ve earned themselves a place in the Rams’ future plans.

“Next year we’re going to be able to hit the ground running and hopefully have a great season,” Rich said.