Is there a pyromaniac among us? Toronto police are trying to find out.

They’re investigating a 27-year-old man in relation to a series of fires throughout the city–including on and around Ryerson campus. On Monday afternoon, the suspect was arrested in connection to a fire on Mutual Street and charged with arson and trespass related offences. 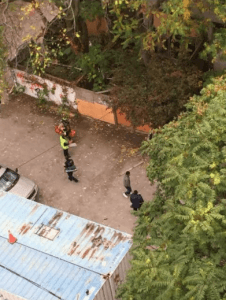 Toronto police’s 51 division is investigating whether Monday’s fire is connected to another fire that occurred in the same area on Saturday night.

Toronto Fire Services responded to the scene at 189 Mutual St. near Gerrard and Jarvis Streets just after 2 p.m. on Monday for the one-alarm fire.

They said the fire was set to a mattress in the basement of the house but it was quickly extinguished.

Fire marshals received reports of an individual trapped in the building on the third floor, but found them on the main floor instead. The marshals removed them from the premises.

Toronto Paramedic Services responded to the scene as well, but no one was taken to hospital.

Third-year hospitality and tourism student Jen Albotra lives in an apartment building beside the incident and she said firefighters broke down the fences around the house to get inside.

She said on Saturday night there was a dumpster fire in the same spot around 8:30 p.m. 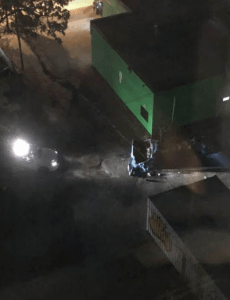 “There’s been a series of small fires in the area over the last two weeks but this investigation is still in the early stages so nothing is con- firmed yet,” said Const. Rob Reid.

Three weeks ago, Ryerson security was alerted about a fire at the alleyway behind 112 Bond St. They found a garbage can “fully engulfed in flames,” according to Tanya Poppleton, manager of Ryerson’s security and emergency services.

Const. Caroline de Kloet added that police are looking into whether the suspect is tied to a series of small fires that have occurred in the downtown core since late August, including one at the front doors of the Church of the Holy Trinity near the Eaton Centre.

“That’s something that they will be looking into absolutely. The investigation is ongoing,” she said.