With the win, the Rams’ record improves to 2-2 for the season so far.

On offence, it was all about the rebounding, as Ryerson’s second chance opportunities helped quell any momentum the Badgers were building from the defensive end.

The Rams ended the night having rebounded 45 per cent of their misses—an incredible rate.

Not that there were very many misses that needed rebounding for the home side; the Rams flashed a high-low offence that generated numerous good looks, allowing them to pull away after the game started out with an even battle.

Ryerson’s inside-out offence especially elevated the play of rookie guard Marin Scotten, who scored a game-high 19 points on the strength of 40 per cent shooting from behind the arc.

Scotten said Emma Fraser was Ryerson’s MVP of the night though. The second-year forward chipped in with a solid performance off the bench, putting up eight points on 66 per cent shooting in 16 minutes of floor time.

Within the paint though, it was business as usual for senior forward Sofia Paska, whose presence down low collapsed the Badgers defence time and time again, allowing the Rams to swing the ball past scrambling Brock defenders.

Even so, the real star of the show was the Rams’ defence, which forced the Badgers to turn the ball over on more than a third of their possessions. 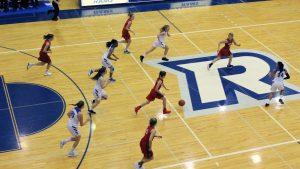 “We rely on our on-ball pressure to balance our defense,” said Clarke. “I thought we were great with that tonight.”

Clarke praised her team’s numerous steals and deflections as a reason that Brock couldn’t find a rhythm on offense.

Ryerson held the Badgers to just 37 per cent from the field, and 20 per cent on three-point attempts.

Overall, Clarke coached an excellent game, ensuring that her players were focused for the full 40 minutes,

There was no better example of the Rams’ discipline than late in the second quarter when Brock called a timeout to stop Ryerson’s momentum. Still, the Rams came out focused and quickly went on a 4-0 run to reclaim their energy.

Clarke credited the entire team’s performance as opposed to any individual contribution for the win.

“It’s exciting to see such a balanced contribution,” said Clarke. “It was great to see us find open players, and for them to confer.”

Up Next: Ryerson takes on the McMaster Marauders on home-court Friday night. Tip-off is set for 6 p.m.