Ryerson community members gathered for Remembrance Day at the north end of Kerr Hall Quad on Friday to commemorate the sacrifices of Canada’s veterans and active military members.

This Remembrance Day, special attention is being paid to key battles from the First and Second World Wars, including the 100th anniversary of the Battle of Passchendaele.

Ryerson Provost and vice-president academic Michael Benarroch gave recognition for the over 2.3 million Canadians who have served in the nation’s military and the approximately 118,000 service-people who have died in combat, including his wife’s great-grandfather who died in the First World War.

Benarroch said that Remembrance Day should be commemorated to maintain the vigilance needed to protect Canada’s freedoms against “new voices of hate” in today’s world.

Munro said that for him personally, Remembrance Day is a purposefully solemn time to reflect on friends who died in military service and the continuing hardships of those transitioning out of the military.

Munro said that those who work in clerical positions in the military still go through “transitional trauma.”

“This person hasn’t seen combat, but they’ve been indoctrinated into a military way of thinking that doesn’t translate out in the real world.” He added that Toronto’s veteran affairs services has “a long way to go” with supporting service members who leave the military.

Munro said he noticed public opinion towards military veterans and Remembrance Day have become more positive since Canada’s involvement in war in Afghanistan from 2001 to 2014.

He said that before the war, there was a real stigma involved with identifying as a soldier, but now he is thanked for his service. Torontonians have begun to “acknowledge Remembrance Day and the service,” he said. 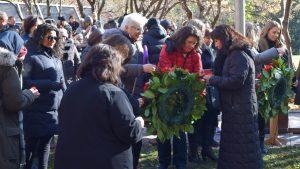 A new survey suggests millennials aged 18 to 34 are most likely to attend ceremonies and pay tribute in person.

The survey was conducted by Ipsos, a nonpartisan research organization, on behalf of Historica Canada with 1,008 participants in October 2017. The poll found that 37 per cent of millennial respondents planned on attending a Remembrance Day ceremony.

Nav Marwah, a marketing and entrepreneurship student and member of Ryerson’s Board of Governors, said he uses Remembrance Day to acknowledge his grandfather, who served in the Indian military.

Chris Munro said he didn’t think the number of students at Ryerson’s ceremony was an “example of how the student body feels” towards veteran commemoration.

Shanze Faisal, a first-year politics and governance student, said that although she recognizes Remembrance Day as an important historic date, she was unable to attend Ryerson’s ceremony because she had too many assignments due next week.

Benarroch said he feels “everybody commemorates [Remembrance Day] in their own way,” either privately or at a ceremony, to appreciate the service-people who have sacrificed for our freedoms.