Ryerson's Lauren Veltman (14) celebrates during the Rams' victory over Western—and her sister, Kelsey

An undefeated streak is sweet, but payback is sweeter as Lauren Veltman led the Rams’ women’s volleyball team to a win Friday night against her sister Kelsey and the Western Mustangs, a team the Rams lost to last season.

Lauren, an outside hitter in her second season, led the Rams in kills and kept the team’s record perfect at 9-0 so far this season after beating the Mustangs in three sets. Kelsey, a third-year player, also led her team in kills in a stunning performance, but the rest of the Mustangs couldn’t seem to find their spark at Coca-Cola Court.

“I get so pumped since she beat our team last season. It just brought so much more energy because I definitely wanted to tie the score,” said Ryerson’s Veltman. “We fight against each other and it’s so great that we’re not letting up just because we’re sisters.”

Last season, the Mustangs beat the Rams in four sets and Lauren—then a rookie—had four kills, whereas Kelsey dominated the game with 13. On Friday night, Lauren showed personal growth as a player, and displayed how much she’s improved over her third-year counterpart. 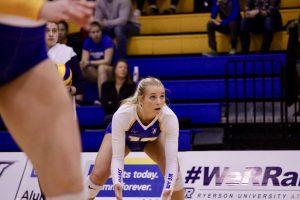 A stellar team, the Mustangs went into the game with a 5-2 record but they came out flat and weren’t able to find their footing. The Rams quickly peeled away into double digits, leading 10-5 within minutes of the first set. The chemistry on the court was strong, as the team blazed through three sets 25-15, 25-13 and 25-14.

Every player worked flawlessly in unison. Cailin Wark, another Rams outside hitter, showed outstanding skill with nine kills, three digs and two blocks. Wark scored the game’s first point with an incredible kill that energized the rest of her teammates for the rest of the set.

“Obviously this is our first league match of the second half so we’ve had a lot of time to train and prepare for a match against a really tough team,” acknowledged Ryerson head coach Dustin Reid. “I’m happy to see us perform so well.”

As the Rams continued to keep a respectable lead in the first set, it was Veltman’s aggressive hit that closed off the frame.

The Mustangs crept up to the Rams in the second when their setter, Kat Tsiofas, scored two serves to bring the score to 15-10. Despite Tsiofas’s best efforts, nothing could beat the Rams’ phenomenal communication on court. The second set ended with a smooth service ace by Wark.

With ease, rookie outside hitter Janelle Albert hit two aces during a stretch of six consecutive serves, pushing the team to a 17-7 lead in the third set. The Rams would then close out the set and match, scoring eight of the final 13 points of the contest to seal the deal.

“What’s special about our team is that it’s not about who gets to play, but it’s the experience you provide for each other on the team,” said Reid. “To be honest, when you’re winning a lot, everything goes well.”

The team faces their long-time rival Toronto Varsity Blues at home Saturday night at the Mattamy Athletic Centre. The Varsity Blues have a record of 6-2, currently in second place in the OUA East.

While it’s going to be an intense game for the Rams, the team needs to be challenged so they continue working hard toward clinching a playoff berth, Reid said.

“It’s going to be a tough match but that’s what we want,” said Reid. “We want to have to show resilience and build as a team through those tough moments.”

UP NEXT: The Rams take on the Varsity Blues at the MAC Saturday night. The game is set to start at 6 p.m.