Five different skaters tallied goals for the Ryerson Rams, who punched their ticket to the OUA West semi-finals with a 6-3 win over the Western Mustangs Sunday night.

Two days after Western dominated Ryerson in their 5-1 win on Friday in London, the Rams returned to the Mattamy Athletic Centre, looking for a spark to get them going at home.

Like a bat out of hell, Harland exploded off the opening faceoff to put the Rams ahead on the scoreboard. With a strong check, a nice move and a wraparound attempt, Harland opened the scoring just 24 seconds into the game, ricocheting a shot off a Western defender’s foot and into the net.

Harland’s first act was even more impressive considering he missed game two of the series due to a suspension.

“Coming off that suspension, I just wanted to make an impact on the team,” said Harland. “Getting out in the first round would have been brutal, so I just really wanted to get the guys going, and luckily I did.” 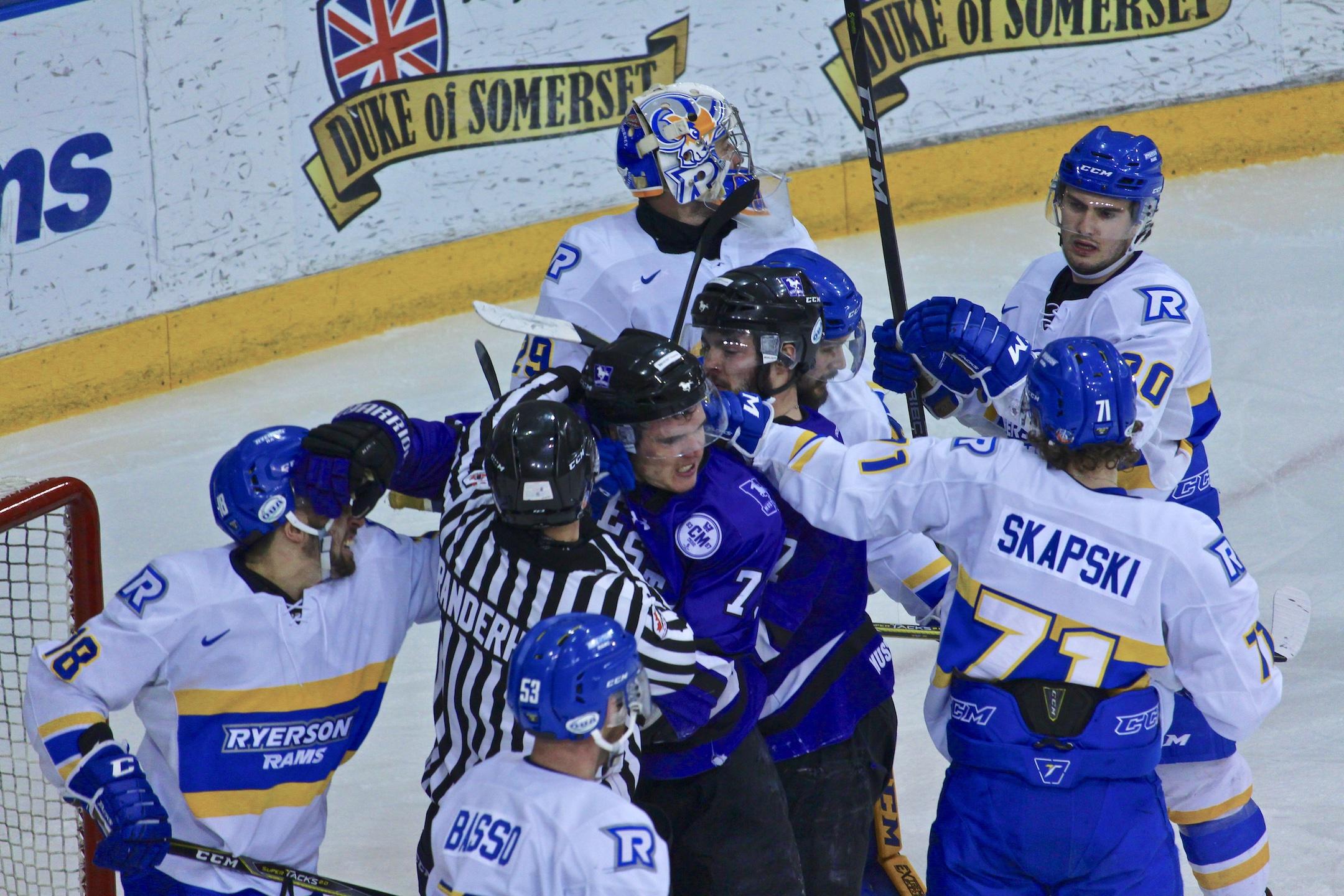 The Rams and Mustangs get into a scrum during the opening frame. Photo: Brent Smyth

Harland’s intensity was the catalyst for the Rams lineup, with forward Cavin Leth and Marcus Hinds soon adding to the hit parade. A few minutes after Harland’s marker, Hinds fed Erick Delaurentis in the slot to double the Ryerson lead, and the Rams would not look back.

Taylor Dupuis, Ryerson’s goaltender and the team’s proverbial backbone, was strong when he needed to be, including a key cross-crease save to deny Mustangs forward Robert Polesello midway through the first.

It was more of the same in the second, when the Rams extended their lead to 4-0, including a nifty passing play starting by captain Alex Basso, and culminating in a Kyle Tibbo wrister top- shelf.

Western eventually snuck one past Dupuis to start the third, but it was too little too late. John Carpino scored off a nice turnaround shot, and a Vince Figliomeni empty-netter sealed the Rams’ victory. 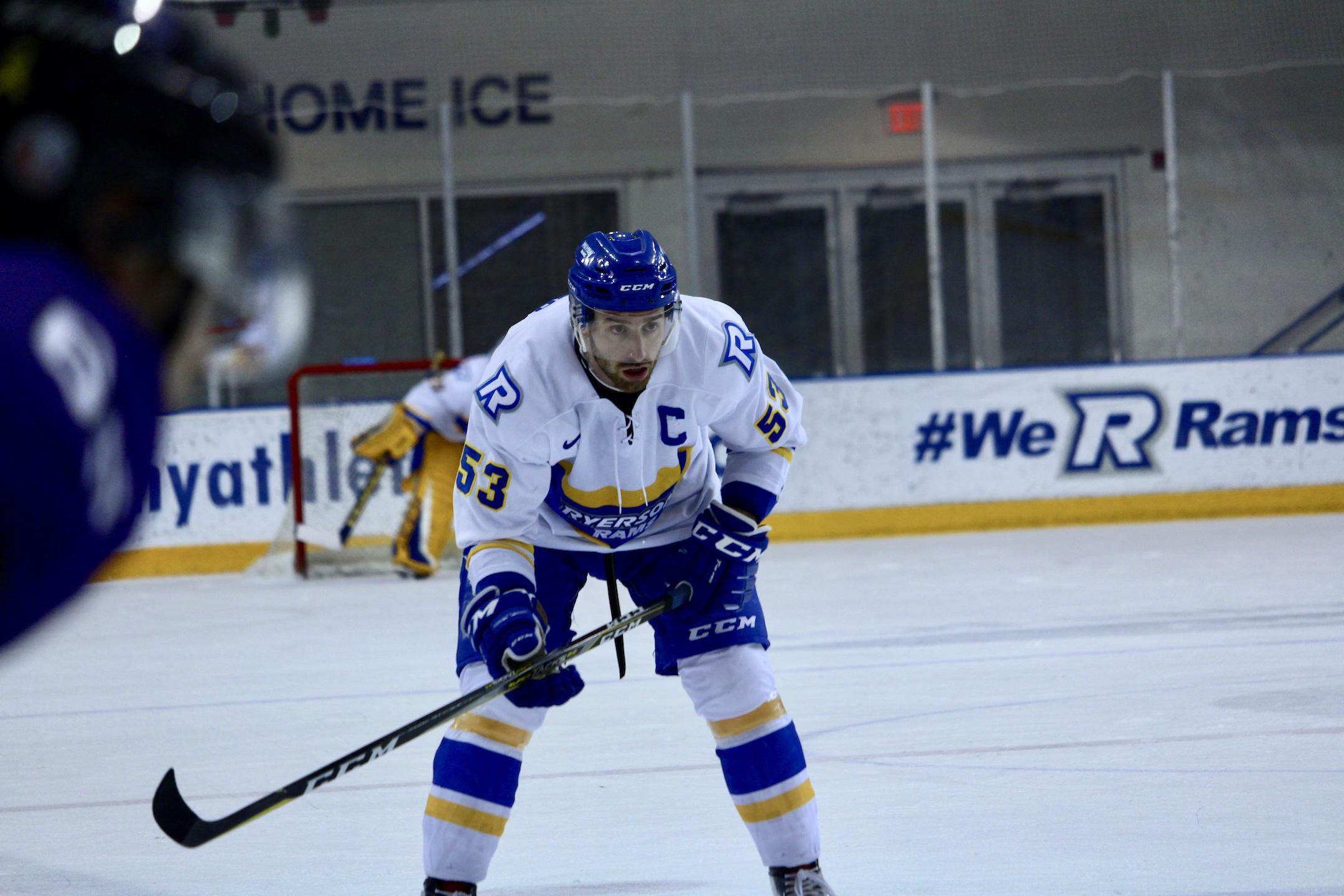 The scoring depth was evident Sunday night, and Ryerson head coach Johnny Duco said that depth will be important if the team hopes to succeed in the coming round.

“We knew it was going to be a total team effort tonight, if we were going to have success,” said Duco. “The guys did a great job, everyone brought it, every line contributed, and I’m really proud of the way the guys responded.”

Duco knows the Rams will need to bring that level of intensity and physicality in the Rams’ next series, as they get set to take on crosstown rival York University in the semi-finals.

“We know they’re really solid defensively, a well-coached team, and they have great goaltending,” said Duco. “It’s going to be a tight game, fought hard tooth and nail, and for us, we need to compete in all three zones. If we do that, we know we can be successful.”

UP NEXT: The semifinal series commences on Wednesday night, giving the Rams a couple days to find their next spark before the Lions arrive at the MAC.