Current Ryerson Students’ Union (RSU) vice-president equity Camryn Harlick—who’s running for re-election with the Elevate slate—said he was the target of verbal attacks from students while campaigning.

Harlick said he was campaigning in the engineering building on campus last week, where he says he was subject to homophobic and transphobic slurs.

On Feb. 6, Harlick posted a statement to his Facebook page, outlining what happened to him as he handed out Elevate information cards to students. He wore nail polish that day—something that should not have been so out of the ordinary, he wrote. 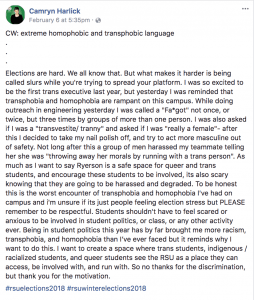 “While doing outreach in engineering yesterday I was called a ‘Fa*got’ not once, or twice, but three times by groups of more than one person,” he said.  “I was also asked if I was a ‘transvestite/ tranny’ and asked if I was ‘really a female’— after this I decided to take my nail polish off, and try to act more masculine out of safety.”

Harlick went on to write that soon after these incidents, another member of elevate, who wishes to not be named, was told by a group of men that she was “throwing away her morals by running with a trans person.”

“Elections are hard, we all know that,” Harlick wrote. “But what makes it harder is being called slurs while you’re trying to spread your platform.”

Harlick said that he does not wish to seek out the Chief Returning Officer (CRO) due to the fact that he is unaware of who the students were, and what their stances were in terms of elections.

During RSU elections, the CRO typically handles complaints among slates, and can grant members demerit points for their actions.

Harlick told The Eye in an interview that his experience in this past week has not been synonymous with what he hoped for in elections—the thing he was most excited for, running as a trans person for the second year in a row.

“You’d think that this would get better as time passes, we’re supposed to be progressing as a society,” Harlick said. “I just hope it gets better, honestly.”