Every week, The Eyeopener receives reports from Ryerson security about people getting stuck in elevators on campus. Getting stuck can lead to medical distress and the breakdowns make parts of campus inaccessible.

From Feb. 4-10, four instances involving students getting stuck in elevators were reported to security. In one instance, security and medics were called because an individual had trouble breathing.

Alp Amasya, Ryerson’s director of maintenance and operations received reports from security detailing the elevator-related incidents that have taken place over the past three years and provided them to The Eye.

Amasya attributes the drop in incidents between 2015 and 2016 to Ryerson’s elevator upgrade program, which was implemented in 2016 and resulted in the replacement of a number of elevators across campus.

Kathryn Woodcock is a registered engineer and professor at Ryerson in the undergraduate occupational health and safety program, where she teaches accident theory, safety evaluation and safety management systems.

She explained that getting stuck in an elevator isn’t always dangerous.

“An elevator stoppage is a safety mode when the safety systems detect abnormal conditions,” she said. “Occupants in a stopped elevator are not in danger as long as they remain in the elevator car and do not try to self-extract.”

“One of the very first questions asked [by security] is, ‘Is anybody experiencing medical discomfort?’” she said. “That will always change the level of dispatch who is called. If they identify any medical issue, emergency services are called.” 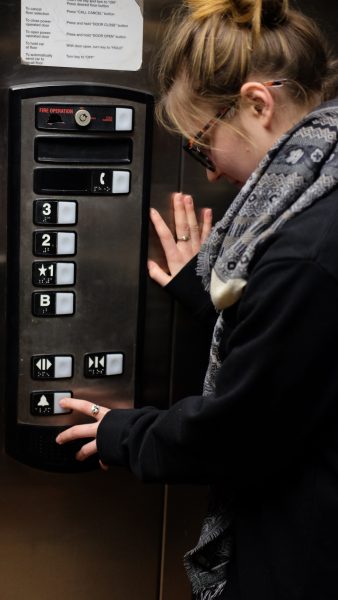 It takes an average of 43 minutes for responders to free someone from an elevator on campus, Amasya said.

Woodcock said a stopped elevator can prevent people who use mobility devices, have physical conditions affecting strength or endurance, or people pushing heavy carts from accessing different levels of a building.

That in turn can affect a person’s ability to access work and education, or even exit a building.

On a campus that’s constantly growing outward and upward, that presents a problem.

Presented as a private member’s bill by member of Ontario provincial parliament Han Dong, Bill 109—the Reliable Elevators Act—was recently adopted into a provincial government action plan. Dong said it will establish a standard for elevator repair timelines and enable the collection of data to dictate repair times and publish information about elevator performance levels.

Ryerson media relations officer Dasha Pasiy said once the Facilities Management and Development (FMD) team receives notice that an elevator has malfunctioned, staff immediately dispatch a Schindler representative to assist. Schindler is the manufacturer of the elevators on Ryerson campus.

Should the elevator be out of service for more than a few hours, a notification email is sent out and a notice is posted on my.ryerson.ca, as well as on all FMD webpages.

Poppleton says the best thing to do if you’re trapped in an elevator is to press the call button in the elevator to connect with an operator, and to remain calm.

“Most of the time, people are only going a few floors up or down,” said Amasya. “If you can use the stairs instead, it can help lengthen an elevator’s lifetime. Not to mention that stairs save energy, too.”