Ailish Forfar during a February 2018 playoff game against Nipissing

The Ryerson Rams women’s hockey team season came to a close Feb. 25 as they lost Game 3 of their first-round series against the Nipissing Lakers. However, the Rams program left behind a historical season that saw them win their first playoff game in Rams’ women’s hockey history.

It was something that captain Ailish Forfar and her teammates will remember forever.

A few weeks earlier, it wasn’t clear that Forfar—who set program records with 11 goals and 23 points this season—would even be suiting up when the playoffs came around.

On Feb. 3, Forfar suffered a concussion against the Laurentian Voyageurs after a vicious body check. After rehabilitation, Forfar managed to return for the series against Nipissing, and once she got on the ice, she knew she had to make the most of it.

“It was probably one of the greatest moments I have ever had in my hockey memories,” Forfar said. “There is no greater feeling than beating Nipissing on their home ice.”

“I have never seen a team so obsessed with winning that game,” she added. “We went in there and dominated, and on our way back I remember the feeling on the bus; that was something I’ll never forget.”

After losing Sunday, the feeling was different, but Forfar will still look back fondly on the season she and her teammates had. 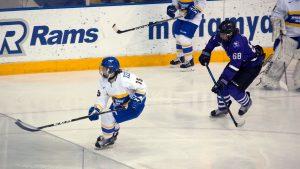 During the regular season, the Rams compiled a 15-7-2 record (five overtime wins and 10 regulation wins) which placed them in fifth place in the OUA with 42 points—statistically their best season ever. The program’s previous best was achieved when a record of 13-10-1 placed them in 7th in the OUA during the 2014-15 season.

A lot of what contributed to Ryerson’s success was the way the team was able to perform as a unit. Five players on the team contributed double-digit point totals, led by Forfar and forward Kryshanda Green. Not to be outdone by Forfar, Green tied the single-season points record with 23, to go along with 10 goals this season.

Ryerson’s depth was a major reason why they were able to persevere while Forfar was out. The team was able to survive the final four games with a 2-2 record without their captain in the lineup.

“All the assistant captains, they took a lot on their shoulders, they rallied around that and I really appreciate them stepping up to the plate while I was away,” said Forfar.

Although the Rams lost their first round series, Ryerson showed some great resolve, especially during the historic Game 1.

“We did this really cool thing before (Game 1),” Forfar said. “I got everyone on the team to write on a little chain link and before the game we went all around the dressing room and talked about someone who we were going to dedicate this game to.”

“And I remember once it was over, we had a huge chain link of one unit, like we were all connected and then we went out there and played one of the best games of our life.”

Forfar and the Rams used the chain link to motivate themselves throughout the game.

“We were down at one point, and we were like, ‘Think of the chain,’” she said. “It really helped us unite as a team.”

Rams head coach Lisa Haley said the team’s success had a lot to do with their current leadership group having two years to gel. Along with Forfar, alternate captains Alex Rodriguez and Sarah McGilvray are set to graduate, and Haley now must prepare for next season without them.

“That’s going to be hard to replace,” she said. “But they’ve left our team in a better position than how it was when they arrived, and the younger players have learned a lot from [them]. We’ll find out how much they’ve actually learned because they’ll be in those positions next year.”

This season was all about trusting one another, Forfar said. Motivators like the chain link were a small indicator of how far the team had come in a single season. The Rams set records in wins, points, fewest losses, goals for and also managed to put together two four-game winning streaks, something they could only do once in 2015.

This season was not about the result, but rather the process. The Rams are trusting it.