Lauren Veltman celebrates Ryerson's win with a smile and a flex

The Ryerson Rams continued their perfect season on Saturday, defeating the Waterloo Warriors in straight sets to move on to the semifinals of the Quigley Cup playoffs.

It was an exceptional performance by the Rams, who’ve now won 20 consecutive matches in the 2017-18 regular season and playoffs. Ryerson took the first two sets 25-14, and the third 25-15, overpowering the Warriors at every turn. 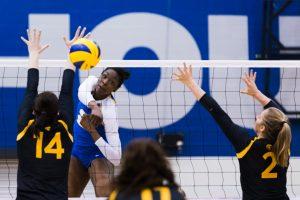 Coming into the game with a 8-11 record, the Warriors were simply overmatched, as Ryerson dictated the game from start to finish.

The Rams’ offensive execution proved to be too much for Waterloo as the game went on, with the home team totalling 43 kills to the Warriors’ 21 in the contest. 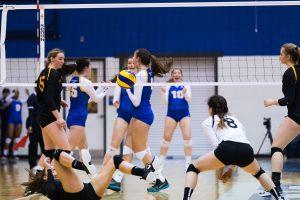 The Rams celebrate while the Warriors deal with the agony of defeat (Photo: Thomas Skrlj)

Ranking second in total errors during the regular season, Waterloo allowed their mishaps to get the better of them by committing a total of 22 unforced errors throughout the match.

Ryerson took full advantage of the Warriors’ troubles, taking control of the games while allowing their stars to go to work. Rams outside hitter Lauren Veltman led the way with 13 kills, while Janelle Albert, Theanna Vernon and Cailin Wark each has eight, respectively.

Although the Warriors led the OUA in total digs (1196) during the regular season, the Rams ended up saving more points than the road team, totalling 32 digs to Waterloo’s 30 in three sets of action. 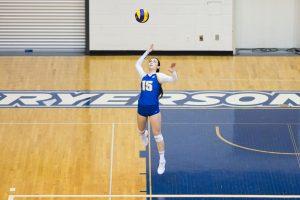 With the win, the Rams will host the OUA Final Four at the Mattamy Athletic Centre. They’ll take on a team yet to be determined in a matchup on Friday, March 9 set to start at 6 p.m.