As if the 2017-2018 season could get any better for Ryerson’s women’s volleyball team.

On top of the squad currently riding an undefeated season into the Final Four for the Quigley Cup, four members of the team were recognized for their individual success Monday by Ontario University Athletics.

Theanna Vernon and Cailin Wark were both recognized as first team all-stars along with captain Julie Longman, who also received the OUA East award of merit, while head coach Dustin Reid was named the league’s coach of the year. Ryerson’s Lauren Veltman was named a second team all-star, and Janelle Albert, Lindsay Kleuskens and Alicia Lam were each named to the all-rookie team. 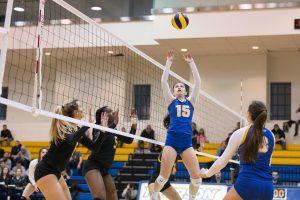 Through 68 sets played, Vernon led Ryerson with 238 points, hitting .432 per cent and blocking 88 kill attempts. Through 62 sets played, Wark totalled 212.5 points and was a killer from serve, compiling 38 aces throughout the regular season. Although this is not the first time these two were made first team all-stars, the honour still means all the same.

Longman, in her fifth year, was not only commended for her impressive season, but also for her work off the court. The East Division Award of Merit recognizes academic success as well as the contributions they make for the community. Longman, according to a Rams’ release, was also a part of several humanitarian trips to Peru and Cambodia as well as participating in Ryerson-led community volleyball initiatives.

A massive part of why Ryerson was so successful this season was the amount of depth they had on their roster, with younger players stepping up and performing in any given situation. Veltman, Albert, Kleuskens and Lam were consistently among the team’s strongest players, and will hope to continue their solid play in the OUA Final Four.

The success on the court can be attributed to the athletes’ excellent play, but the driving force has been Reid, who guided the Rams to their first-ever undefeated season. The team now sits at 19-0 after their win over the Waterloo Warriors on March 3. Reid also won coach of the year honours in 2010.

Despite this team’s unprecedented success, the playoffs are unforgiving. One unfortunate game and all prior success means nothing. The Rams will put their season to the test this weekend against a relentless Western Mustangs team in the Quigley Cup semifinal at the Coca-Cola Court.