Just over 10 years ago, the Ryerson Rams men’s hockey program was in complete disarray.

The Rams could barely house a full-lineup, were forced to travel 45 minutes to a rink in Etobicoke for their home games and to make matters worse, they couldn’t win any games.

At the centre of it all, literally and figuratively, was Kevin Krasnowski.

Joining the Rams in 2005 and graduating from the Radio and Television Arts program in 2010, Krasnowski quickly evolved into a top-tier player and eventually became the heart and soul of a team that was fighting to gain respect.

“There were times that people talked about how the hockey program was going to get terminated,” Kransowski said. “To know we didn’t give up and to know we helped paved the way for the Gardens, it was great to see.”

While he is viewed now as a Rams legend, Krasnowski admitted that his hockey career almost didn’t happen. Due to the team’s struggles, he contemplated moving on after his rookie season to focus on his studies.

Shortly after he was hired by Ryerson, Wise called Krasnowski and promised that the program would be turned around and that he should be a part of that building block. It encouraged him enough to stay with the team and he believes it was one of the best decisions he’s ever made.

“Graham brought in more professionalism,” he said. “He implemented a new attitude and a new system and it was just a matter of the guys buying into it.” 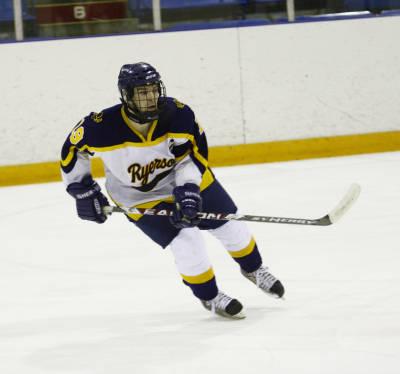 From there, Krasnowski was able to achieve a lot of success individually.

He was named MVP of the Rams for four consecutive seasons from 2006-2009, won the Ryerson Male Rookie of the Year award in 2006 and captained the team for his last three seasons.

While he improved with each passing season, so did the Rams and that paid dividends in his final season at Ryerson in 2009-10.

On February 3, 2010, during his final regular season home game as a Ram, he scored the overtime winner off a rebound to defeat the the University of Toronto Varsity Blues 3-2. It clinched a playoff spot for the first time in seven seasons and the celebration was an emotional one for both him and the team.

Despite an eventual second round exit, Krasnowski viewed it as a monumental experience both on and off the ice, and recalled when towards the end of that season, the team learned that Ryerson had purchased Maple Leaf Gardens.

Krasnowski’s influence on the team hasn’t been forgotten in the years since his last game at Ryerson.

“[Krasnowski] was not only a great leader on and off the ice, but he was a great competitor,” Wise said. “With the team trying to find its way, he always had a positive attitude that pushed the team forward.”

Despite being eight years removed from his graduation year, Krasnowski remains heavily involved in Ryerson, serving as the Director of Shared Interest Groups for the Ryerson University Alumni Association, as well as an ambassador for the men’s hockey team.

Krasnowski’s love for the school has not gone unnoticed by current Rams coach, Johnny Duco, who is grateful for what he has done for the Ryerson community.

“You only have to be around Kevin a few minutes to see how extremely proud he is to be a Ram,” Duco said. “We are very fortunate to have him help guide our program and [we] truly appreciate all he does.”

Since graduating, Krasnowski has worked as a sports broadcaster for TSN, CTV, and Universus Media Group Inc among others. He currently runs his own startup video company called One Ram Media, a video and editing company that is focused on serving the GTA.

When reflecting on his Rams career as a whole, Krasnowski felt more proud of the progression the Rams made each season than his individual success.

“When I came in my first year, we only won one game,” Krasnowski said. “Our team could have quit, and there were times that people talked about how the hockey program was going to get terminated. Knowing that myself and the team had paved the way for the future success that they’re having right now was very memorable.”