That has since been replaced by three letters: “TBD” (To be determined).

The three-letter acronym could be there for a number of reasons. Longman’s graduation is right around the corner, bringing with it a potential career in child and youth care, and in the fall, she is getting married.

Right now, the 22-year-old is working in a women’s shelter, but her end goal for her career is to find a way to provide children who are less fortunate with an opportunity in sport that they might have never had before.

“My very long-term goal—once I’m financially stable—is to combine something that I’m very passionate about and something that has provided me with a lot of lessons and opportunities,” Longman said.

When the 2017 winter break hit, Longman and the Ryerson Rams women’s volleyball team were in the midst of what would turn out to be the best season in the history of the program.

However, the successful start to the season wouldn’t be the biggest thing to happen to Longman during the break, as her boyfriend popped the question during their vacation in Mexico.

Once the second half of the season was underway, Longman and the Rams continued their dominance of the OUA, going on to claim a perfect season en route to the program and school’s first-ever national championship. 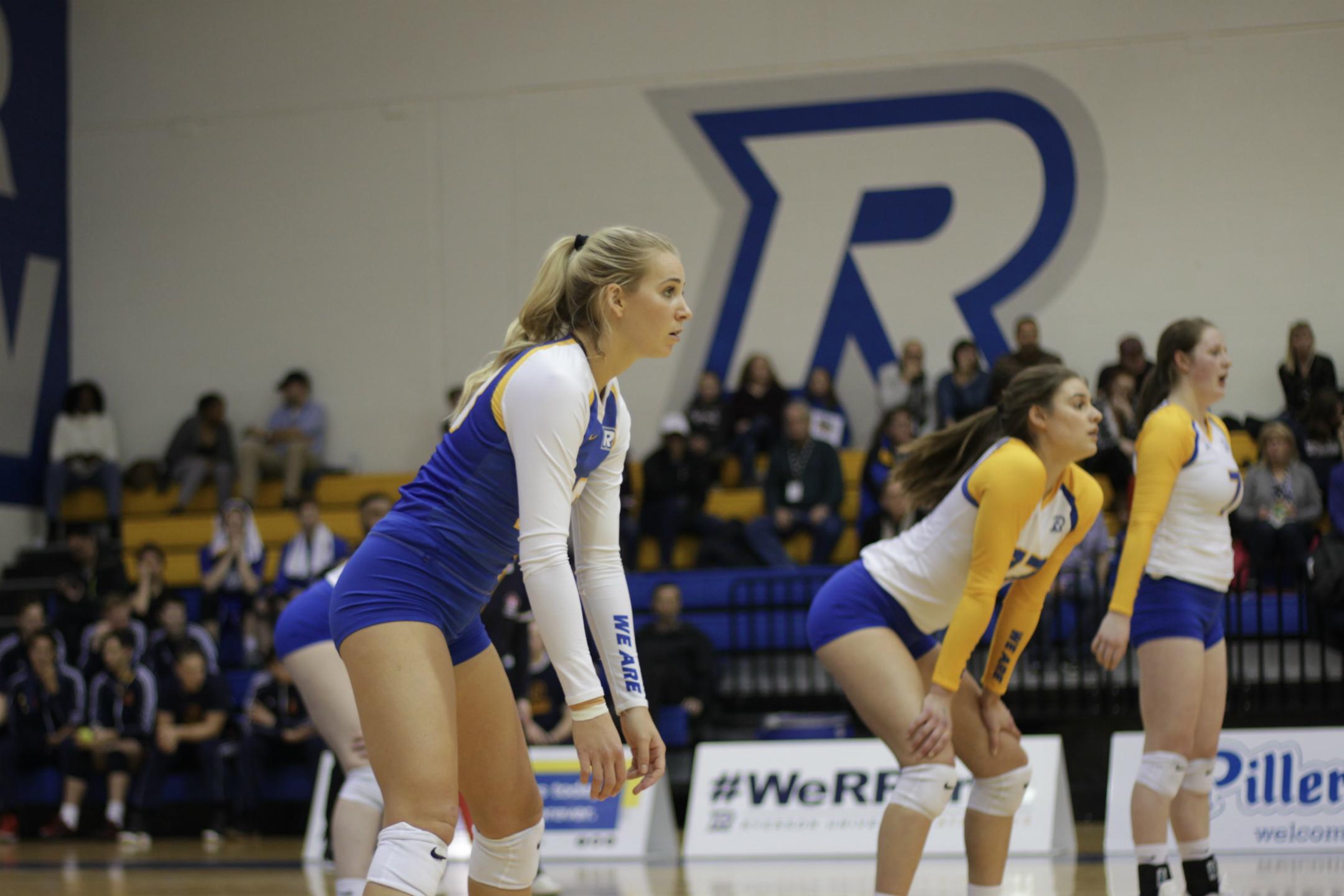 Ending a collegiate career with a national championship is something that not many athletes have the chance to do, but Longman did, and she hasn’t taken it for granted.

“On a personal level, I feel very proud being able to end my career like how myself and the other graduating players did,” she said. “ It’s a bittersweet moment because as a team, we’ll never be together again.”

With her time at Ryerson behind her, Longman has entered into the ONE Volleyball Premier League draft.

The ONE Volleyball Premier League launched in Toronto and Calgary in 2017, giving volleyball players in Canada an opportunity to play at the professional level. The 2018 season will be hosted at Ryerson from May 31–July 21.

The league is made up of current and former professional, national team members and top North American Collegiate players.

Aside from playing this summer, Longman will also be coaching with the Leaside Volleyball Association, as she holds the role of camp director for their summer camps.

With her 20 years of volleyball experience, Longman has a lot to offer, and coaching could one day be in her future as well.

“Just because you’re a decent player doesn’t mean you’ll be a good coach, so I have a lot to learn,” she said. “But, I’m hoping with my Leaside experience, I can start to gain more knowledge as a coach.” 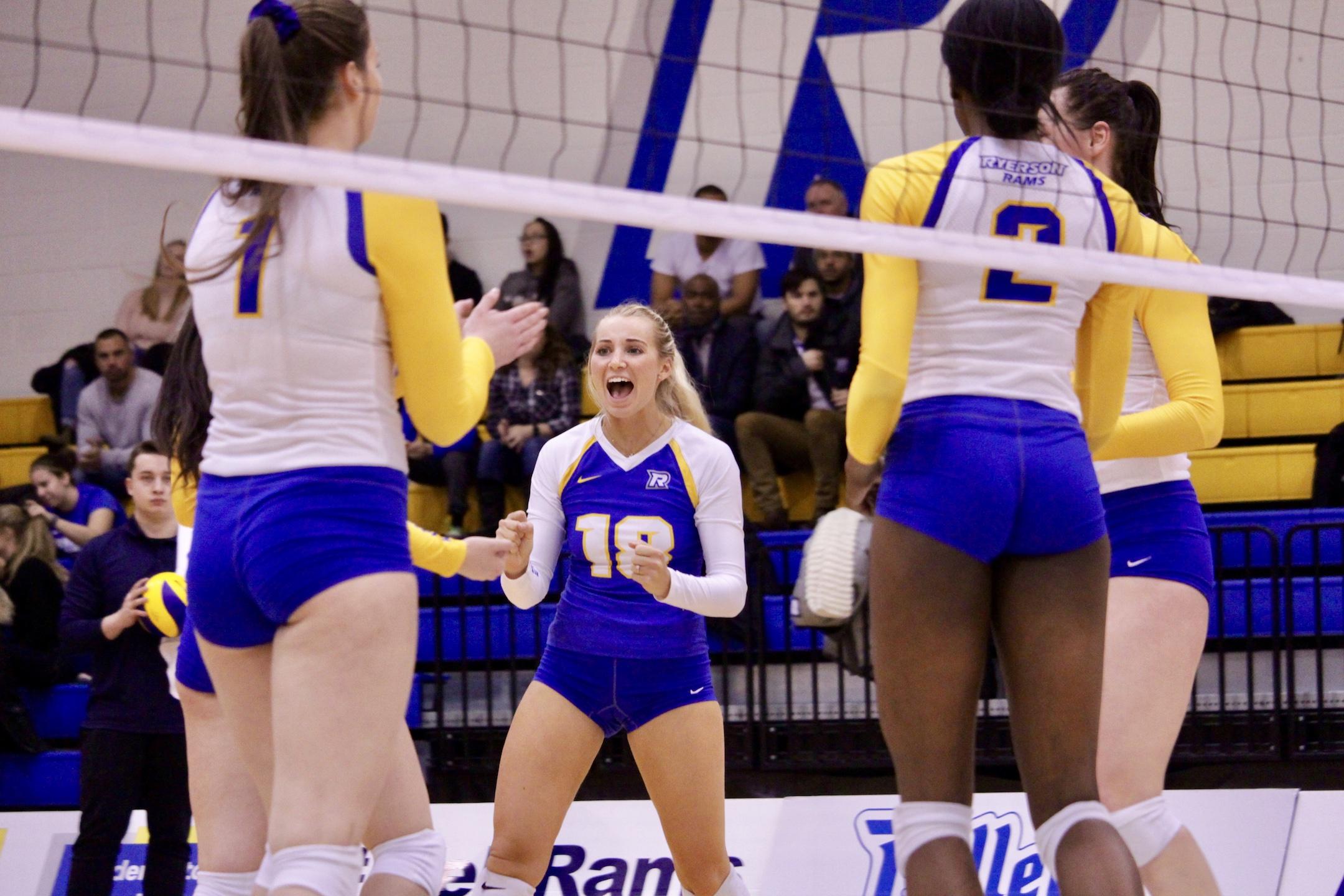 Longman gets fired up with her teammates during the OUA Final Four semifinal game versus Western (Photo: Brent Smyth)

Even though Longman’s time with the Rams has come and gone, it’s clear that the legacy she’s leaving behind will be a memorable one.

From the moment she joined the program, Longman’s presence on the court was obvious as she earned multiple honors, including an OUA All-Rookie team selection, Ryerson’s RSU Female Rookie of the Year and an OUA East Libero of the Year award, during her five-year career.

For Longman, the big adjustment in university wasn’t on the court, but in the classroom.

“The pace and speed of the game is a bit faster, but when I was in high school how I was doing academically wouldn’t affect me starting on my club team,” she said. “But once I showed up [to Ryerson], Dustin [Reid, the Rams’ head coach] made it clear that I would have to prove myself in the classroom before I prove myself on the court.”

While enrolled in the economics and finance program, Longman struggled with school and late in her second year at Ryerson decided it would be best to switch majors.

“I was coming here to play volleyball, but the program I was in allowed me to take Child and Youth Care electives, so I took the intro class and I began to take more and more CYC classes with the hopes of switching majors.”

The program switch for Longman opened her eyes to a whole new world.

“Being in that field and learning about the realities of the world we live in, I know that I’m very fortunate with my opportunities at Ryerson and having the chance to give back was something I wanted to do”

Longman wanted to start making a difference during her time at Ryerson and she would do just that by establishing an initiative.

Longman walked into the Ryerson Athletics Volunteer Experience (RAVE) office and tabled the idea for a humanitarian trip. And thanks to the hard work of herself and others, in 2016 Longman and eight other Ryerson athletes spent one week in Peru to help build a school within the Pachacutec community in Lima.

The trip was such a success that the following year, Longman and six athletes made a trip to Cambodia for two weeks to volunteer at local schools to help run sports programs and provide daycare for mothers with young children so they were able to work.

This spring, Longman will be busy planning another big event, but this one will be for family, friends and whoever else she wants, because it’s going to be her wedding.

Longman and her fiancé are wasting no time and will tie the knot just 9 months after getting engaged.

“We’re doing an outdoors type thing on the water and we didn’t want to wait until next summer, because I’m a very impatient person and don’t like waiting for anything,” she said happily.

With marriage on the way, Longman and her fiancé are looking to expand their family by adding another member.

“I wouldn’t mind a mini me and a mini him running around,” she laughed. “We’re getting a puppy in a few weeks first though.”

As of now, the future for Longman is yet to be determined.

But, if her five years at Ryerson have proven anything, it’s that whatever comes next will be something special.