The Ryerson Rams men’s hockey team are far from complacent with last spring’s second-round exit, as the team’s sights are set on capturing the program’s first-ever U SPORTS National Championship.

Anything short of that just doesn’t cut it anymore.

“We had a team on paper that could probably go head-to-head against any top team in our league,” said second-year Rams forward Cavin Leth. “It’s definitely a mindset coming into this year that we’ve got that same expectation [to win a championship].”

In this era of Ryerson hockey, there’s no settling for anything less than greatness.

“I think now, [winning a championship] is what’s expected from the program,” said Rams captain Alex Basso, who turned down pro offers to finish his MBA at Ryerson and play a fifth year with the Rams. “We’re at the point where we need to produce in the postseason and I think this team should be a team that goes relatively deep and gets over that hump.” 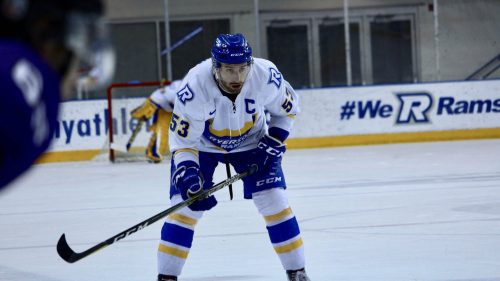 For the Rams, getting over that hump will require top-end contributions from their core players. There’s little doubt that Matt Mistele will be able to average over a point per game. There’s little doubt that Alex Basso, who attended the New York Rangers development camp this fall, will be one of the best defenceman in Ontario University Athletics (OUA). And you know goaltender Taylor Dupuis will keep doing what he does best, and that’s keeping the Rams in games.

Everyone knows what those three core players can do, but over the last few seasons, the team’s lack of depth has raised question marks.

In an effort to shore up the bottom-end of their lineup, the offensively-minded head coach Johnny Duco went out this offseason and recruited a plethora of ex-OHL players, many of whom had prominent careers at the Major Junior level.

Shankar and Shoemaker are two interesting additions to the blue-line, as they both add some much-needed physicality to the Rams’ backend.

In 2016, Shoemaker was drafted in the sixth round by the San Jose Sharks, but after a disappointing 2017-18 campaign the Sharks opted not to retain the six-foot-two defenceman’s rights. Shoemaker possesses a big frame, and he adds a layer of physicality to the backend that the Rams desperately need.

“[In] his last two years in the OHL, Zach was one of the best hitters in the entire league,” Niagara IceDogs head coach Billy Burke, who coached Zach for 24 games last year, told The Eyeopener.

Although Shankar is known for his physicality, Burke insists there’s more than what meets the eye with Shankar, who has an unheralded offensive skill set.

“Ryerson students and fans [should] be really excited,” he said. “They’re going to see a guy who can shut down some of the best players in the league [but] he’ll also be able to contribute offence.”

Midway through last season, the IceDogs dealt Shankar to the Windsor Spitfires where he recorded 10 assists through 29 contests, not to mention three points in six playoff games.

Another newbie that could blossom for the Rams is forward Patrick Fellows. The 21-year-old played four years with the Erie Otters, serving as a reliable defensive forward for Otters’ teams that featured the likes of Connor McDavid, Alex Debrincat and Dylan Strome.

“Teams win because of people like Fellows,” former Otters general manager Sherry Bassin said. “He understands where he fits in and he accepts it. He still gives you every ounce of energy. He knew that he wasn’t going to be a McDavid or Debrincat—but he knew he could help the team.” Throughout his OHL tenure, Fellows played on Erie’s shutdown line and he was one of their prime penalty killers.

After suiting up for the ECHL’s Toledo Walleye in 2016-17, forward Matthew Santos was forced to redshirt for the Rams last year, as per U SPORTS rules. With his first-year of eligibility set to get underway, there’s a real cause for optimism with Santos, who possesses an elite shot and offensive prowess, along with a strong IQ in his own end of the ice.

Duco describes him as a coach’s dream, stating that he’s “going to be one of the top forwards in the OUA West”, and that he’ll “give the team a nice 1-2 punch” depending on if they play him with Mistele.

There’s no doubt that Taylor Dupuis is the Rams’ starting net-minder, but beneath him on the team’s depth chart is some pretty intriguing plan B options for Duco in the event of an injury to Dupuis.

The Rams will have not one, but two ex-OHL goalies in Troy Timpano and Garret Forrest. Timpano split his four-year OHL career between the Sudbury Wolves and the Erie Otters. In 2016-2017, his 19-year-old season, Timpano led the Otters to an OHL championship and a berth in the memorial cup. Rounding up the group of goalies is Garret Forrest, who spent the last two years with the OHL’s Flint Firebirds and is the franchise’s career leader in wins and saves.

With a star-studded lineup, an established supporting cast, there’s plenty to be excited about with the Ryerson Rams. They’re not in it for the playoff-participation trophies, nor the regular season success. They want to prevail as champions.