By Peter Ash and Christian Ryan

A mix of preseason and regular season action rounds out a busy early-year weekend for the Ryerson Rams. Catch up on all of the weekend’s matchups with The Eyeopener‘s sports editors.

The Rams resumed their winning ways against the Paladins, with Muaz Saleh scoring the first two goals of his Ontario University Athletics (OUA) career. He was not the only first-time scorer, as Yonis Jama scored in his Rams’ debut. Yoel Kebreab, also making his first start in net for the team, turned away two shots to earn a clean sheet to kick off his OUA career.

The Rams left their Kingston road trip with a clean sweep, taking their second consecutive victory over the Queen’s Gaels after the previous week’s streak-disrupting draw with the Carleton Ravens. The two OUA powerhouses were equally matched offensively, with both keepers facing five shots on goal. Alex Meczarski and Mirza Custovic’s two goals in the first half kept the Gaels’ comeback attempts at bay.

UP NEXT: The Rams continue on the road next weekend as they travel to take on the Nipissing Lakers and Laurentian Voyageurs. 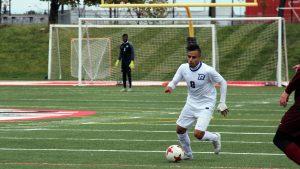 The Rams’ attempts to follow up a season opening victory was thwarted once again on the road facing the Trent Excalibur. Both teams had significant scoring chances, with usual suspect Alessia Carvalho registering three of the Rams’ six shots on goal. But the Rams were unable to get past Excalibur keeper Mackaylen Bickle. In the second half, Abbey Pantusa put the Excalibur ahead for their second victory of the season.

In claiming their third draw of the season, the Rams were unable to hold onto a lead out of the first half to get back into the win column against the UOIT Ridgebacks. Katie Joyce netted her second goal with the Rams, and first of the season-in the first half to put the Rams on top heading into halftime. Rams goalkeeper Elisa Lapadula faced a flurry of shots, stopping 11 before Mikaela Tierney evened the match in the second half to avoid a second loss to the Rams this season.

UP NEXT: Ryerson will stay on the road, looking for another chance to claim a victory against the Nipissing Lakers and Laurentian Voyageurs.

Heading into the weekend with a 1-3 record, the Rams were looking to get back on track against the Queen’s Gaels. Despite having veteran starter Kevin MacDonald on the mound, the team struggled to score runs and help out on the defensive end. A couple of uncharacteristic errors from the Rams led to two big innings from the Gaels in the third and eighth, which would ultimately seal the victory for the home team.

In Game Wwo, the Rams’ bats caught fire, as the team received a total of eight hits from Andrew Ciuffreda, RJ Mienkowski and Aidan Dolan. The Gaels made things interesting in the bottom of the ninth, but the Rams bullpen would seal the deal the rest of the way to end the game.

Leaving Kingston with a split on their hands, Ryerson headed back home to gear up for their next matchup against the the Toronto Varsity Blues. Unfortunately, the home side wouldn’t get a chance to get back into the win column.

Game One was awfully close, but was highlighted with errors for most of the game. Both starting pitchers started off strong, but allowed three runs each in the fourth inning of the game. The Varsity Blues, however, would get the last laugh when they managed to score off a single from Varsity Blues utility player Brandon Hadfield. The run would ultimately be good enough to secure the victory.

The second and last game of Sunday’s home-stand didn’t end well. The first inning had an immediate impact, as Rams rookie pitcher Mitch Flacco couldn’t find the strike zone early on. As a result, Toronto would score six runs in the frame, with each of them coming off three walks, a hit-by pitch, a single and an error. Fifth-year second basemen, Kyle Conquer, drove in the lone run off a groundout for Ryerson in the loss.

UP NEXT: The Rams will stay home for the weekend and take on the McMaster Marauders and Brock Badgers on Sept. 22 and 23. 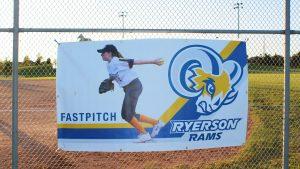 Last Saturday, the Rams split their doubleheader against the University of Toronto Varsity Blues. In Game One, the Rams managed to shut out the Blues with their solid pitching and defensive effort. In Game Two, however, Ryerson wouldn’t be able to keep it going against the fastpitch powerhouse, losing 3-5 in a close contest.

Immediately after their home-stand, the Rams travelled to Stronach Park in London to take on the Ontario Intercollegiate Women’s Fastpitch Association (OIWFA) West-leading Western Mustangs. In both games, the Mustangs showed why they’re one of the top teams in the association, shutting out the Rams and outscoring them 11-0 to end the weekend.

UP NEXT: After a tough four games, they’ll look to bounce back when they take on the Carleton Ravens and Ottawa Gee-Gees at Hendon Park on Sept. 23 and 24.

Although extra time was necessary, the Rams started their year off on the right foot by taking the win over the Ottawa Gee-Gees at home. For the first two periods, there was no clear leader as the teams traded the lead. As the Gee-Gees prepped for the victory with a narrow lead over the Rams late in the third, Matt Mistele tied the game with 10 seconds on the clock. Mistele’s divine intervention would allow the Rams a shot at the victory, a chance they capitalized on with captain Alex Basso claiming the victory with an overtime goal.

The first Rams weekend of the year, although preseason, should get the Ryerson faithful excited for what’s to come as the team sweeps at home. A sluggish start to the game for the Rams, sitting at a 0-2 deficit early as the Carleton Ravens took advantage of their ill-rested opponents. Coming back to tie the game 3-3 after trading goals with the Ravens, back-to-back goals by Tre Folkes and Adam Craievich (with his second of the game) allowed the Rams a comfortable lead to the final whistle.

UP NEXT: The Rams eagerly await the arrival of the U SPORTS force University of New Brunswick (UNB) Reds for a series of games this weekend at the Mattamy Athletic Centre. 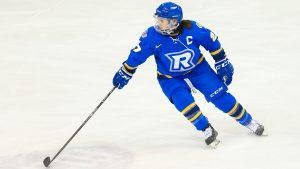 The Rams had some rust to kick off returning to the ice for 2018-19, getting preseason underway in a contest against inner-city rivals the Varsity Blues. As the team continues to work out new faces, lineups and strategies, they fell to the Varsity Blues in their first matchup of the year. Luckily, with the regular season’s starting face-off being weeks away, the team has ample time to find themselves and follow up the previous season’s playoff performance.

Things began to click for the Rams as they defeated the York Lions on their own turf. The new look Lions branding could not match up to the new look personnel of the Rams, as the two meet for the first time this year. Although they’re well ahead of playing games with true meaning, the Rams can hold their heads high heading into the upcoming season with the knowledge that they are meshing as a unit.

A slow burn across the week’s action ended with a handed victory for the Rams over the Concordia Stingers. The sticks came alive, giving less rest to the score buzzer than the Rams had been afforded throughout the first four days of preseason action.

UP NEXT: The Rams are headed south of the border for a pair of NCAA Division I bouts against Penn State Nittany Lions in University Park, Penn. and the Rochester Institute of Technology Tigers in Rochester, N.Y.