Women in conversation with professional leaders in a variety of careers from forensic analyst to social worker at the Chang School of Continuing Education. Photo: Kieona George
Reading Time: 3 minutes

Attendees at the women in leadership event at the Chang School on Nov. 8 exchanged stories and learned about how to deal with problems in the workplace faced by women and how to ask for what you want out of your career.

In collaboration with the sociology department, the Career and Co-Op Centre hosted Break the Ceiling at Ryerson, a networking event for female students who identify themselves as cisgender, transgender, non-binary and allies. 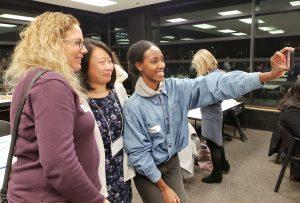 The event was held to have a panel discussion as well as personal group conversations with women who are currently in a variety of leadership roles. The conversations were held in 15-minute intervals before rotating to the next table.

“Absolutely, there’s a glass ceiling but I also want to be very nuanced and critical of this notion that the glass ceiling is equal for all of us, because it isn’t,” said Yamikani Msosa, who is the coordinator for diversity and inclusion at Humber College and one of the professionals on the panel which was held before the discussion tables.

Grace Chau, a senior investigator in human rights at Ryerson, said for the longest time she refused to believe in the glass ceiling until her belief in meritocracy—the notion that if you work hard, you’ll succeed—began to erode.

“Certainly, I have bumped my head against it many times,” said Chau. You can see it when a colleague who may be less qualified than you receives promotions or training opportunities that you don’t. “Sometimes when I haven’t been able to break that glass ceiling, I found myself having to move to a new building.”

Akilah Haneef-Jabari, a member of Ontario’s anti-racism directorate, said that she used to think the glass ceiling was opaque for someone who looks like her.

“Sometimes when I haven’t been able to break that glass ceiling, I found myself having to move to a new building”

In her twenties, Haneef-Jabari decided to become Muslim and changed her Western name to reflect herself. “Akilah Haneef-Jabari means don’t call me if you don’t want to see a racialized woman, don’t bother…I am an African, Muslim woman.”

After the panel, leaders sat at tables where attendees engaged in conversation with subject prompts like promotion and negotiation, mental health and defining success.

“When someone says no, it’s just a bargaining opportunity,” said Peggy Nash, a visiting professor at Ryerson and former federal MPP for the Parkdale-High Park riding.

It was a topic at Nash’s table that women should ask for what they want instead of just taking what’s offered. “I think we serve others best when we realize our own worth,” said Nash.

Msosa encouraged attendees to find mentors who can be honest about their work experiences and give constructive advice. Not comparing yourself to others and recognizing that self-growth occurs at different paces for everyone were other topics at her table. “It’s not this glorious path of being able to get where you like, it’s really a jaggedy-ass road. And sometimes you won’t know if you’re doing the right thing.”

Lourdes David, a sixth-year arts and contemporary student, said she wished she went to events like Break the Ceiling sooner in her university career. At Msosa’s table, David agreed with Msosa that as cliché as it is, to allow passion to drive you.

“To hear you say to pursue what you love, is an assurance that, okay, sweet, I’m on the right track,” said David.