Throughout the years, Ryerson’s LGBTQ+ community has seen lots of changes. The community has fought on many battlefields, taking the process of having their presence known one battle at a time.

These pieces of history can be found in the Ryerson Archives, as well as a very detailed timeline made by Alysia Myette back in 2013 in the Canadian Lesbian and Gay Archives. 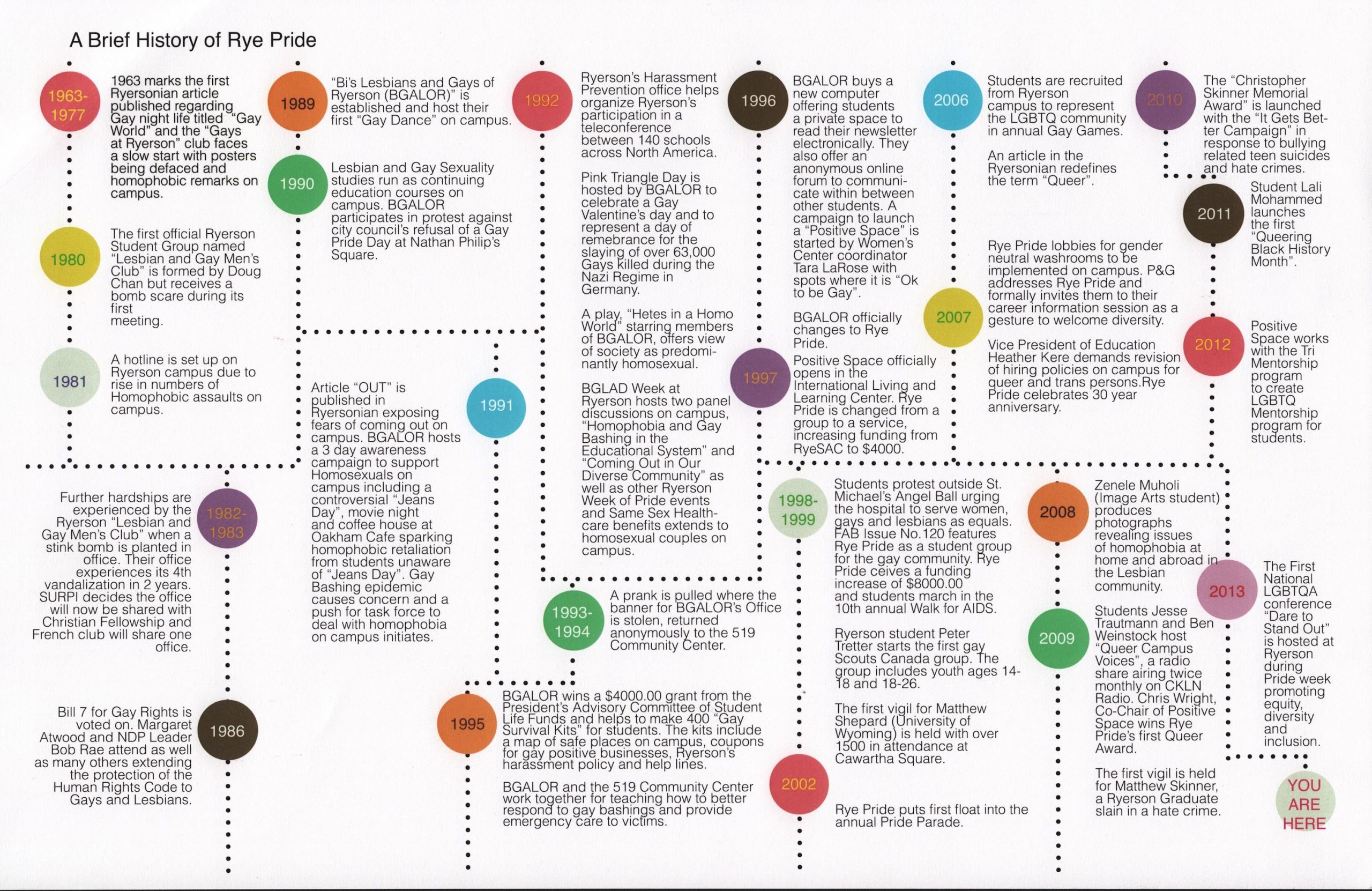 Timeline of LGBT+ activism at Ryerson by Alysia Myette

Homosexuality wasn’t decriminalized until 1969 in Canada. Before legalization, people weren’t allowed to engage in sexual activity with a member of the same sex, and people who did so were risking a long prison sentence.

“We can really see how discrete and behind-closed-doors that gay people had to live at that time. So [an archived article from 1962] mentions how [homosexuals] had to enter secret doors in order to enter clubs, and how people were sticking to private home parties,” says Kevin Manuel, a sociology librarian who collects the LGBTQ+ archives for Ryerson. “If your neighbours suspected that you were having gay people in your home, they could report on you and call you in. It was a very difficult time for people then.”

After the Gay and Lesbian liberation movement in New York City took off in 1969 with the Stonewall riots, and the later Operation Soap riot in Toronto in 1981, there was hope for an LGBTQ+ rights revolution on the rise. Even after homosexuality was deemed legal, students who were of queer identity were still cut with a derogatory blade for a very long time.

“The [Gay’s and Lesbians] had an office, and on the first day it was opened, it received a bomb threat,” says Alysia Myette, an Indigenous, queer and genderqueer individual enrolled in Ryerson’s Fashion Master’s program. They had a big role in the historical archives of the LGBTQ+ community at Ryerson.

According to the timeline, the bomb threat came to life, but in a minor, stink bomb form. When the Gays and Lesbians office opened in 1980, the office was vandalized four times, two years prior to opening. Two years later, the Gays and Lesbians changed their name to BGALOR (Bi’s, Gays and Lesbians of Ryerson) in 1989, the office came up with “Jeans day”, where students were asked to wear jeans in support of the LGBTQ+ community. In response to this, anonymous signs with homophobic messages popped up. They read: “Just because someone wore jeans today doesn’t mean they support f*gs, you stupid fucking queers.”

“If your neighbours suspected that you were having gay people in your home, they could report on you and call you in. It was a very difficult time for people then”

“Maybe someday [homosexuals] will be integrated into society and [gays and lesbians] will not be ridiculed,” said Carolyn Macleod in the 1991 interview.

Today, the LGBTQ+ community has been prospering. “I think Ryerson is in a special place because we are neighbours with the Gay Village,” Manuel said. “It’s had an influence on Ryerson.”

However, Andreas Rivera, one of the coordinators at Rye Pride, views this differently.

“I will admit that we have access to things some other universities don’t, like here at RyePride, the 519 or the [Gay] Village right there,” Rivera says, “However, your classes are in Ted Rogers [School of Management], not the Village, and you have to walk into these spaces that are very heteronormative.” Heteronormativity is a worldly viewpoint that suggests that heterosexuality is the “default” or “preferred” sexual orientation.

After being here for four years, Rivera realizes the heteronormativity ingrained in Ryerson as an institution. “We want specifically queer kids to go home without feeling that this campus is a jaded battlefield of heteronormativity and bigotry,” said Rivera. This is why Rivera joined RyePride in an attempt to offer a space where people who might feel unsafe can have a safe space on campus. “The space is whatever you make of it,” says Rivera. “Whether they want to do homework, watch Netflix, talk about controversial and embedding topics, [or] just sit there and do nothing—this is their space, and we want to build a sense of community off of that.”

“I see heteronormativity and cisnormativity in the world, and not just here at Ryerson. You see this in many media, where members of the opposite sex fall in love, marry, etc.,” Myette said. “[The community is] not saying this shouldn’t exist, but it would be nice to see some diversity and not this standard.”

The LGBTQ+ community may have more battles to fight, but they’ve fought their way to a solid present. So, what is the next step? According to Rivera, “It’s important to update ourselves and the world to know what queerness is since queerness has been changing in the last few decades.”

“We just have to continue what we’ve been doing; acknowledging ourselves and providing a platform that will have queer individuals be heard so that people know we exist.”