About 40 Ryerson community members walked to the downtown Toronto protest on the morning of Nov. 29 to attend a press conference and express concerns about the Progressive Conservative government’s cutbacks.

The Ontario government announced in their Fall Economic and Fiscal Review that the OCA would be dismantled and its investigative staff transferred to the Office of the Ombudsman in order to balance the budget.

The OCA is the only independent office in the Legislative Assembly that advocates for the province’s must vulnerable and marginalized children, such as Indigenous children, children of colour and children with disabilities.

The Office of the Ombudsman investigates complaints across the provincial government.

“It’s so important that young people have an independent office that speaks for them,” said Sheldon Caruana, a fourth-year child and youth care student at Ryerson.

Caruana said he grew up in government care himself. The OCA became prevalent in his life as he became a teenager, he said.

“You’re growing up in an institutionalized system. It’s based on policy and laws, and it’s no way for any kid to grow up,” said Caruana. “You need to have safeguards in place that are going to protect kids and hear the voices of kids when they say ‘oh, this isn’t right.’” 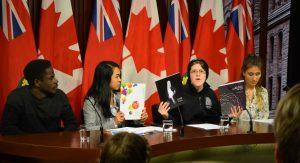 Judy Finlay, graduate program director for Ryerson’s School of Child and Youth Care, was vital in organizing the press conference and rally alongside the Ontario Child Advocacy Coalition. She was a child advocate with the OCA from 1991 to 2007.

Finlay said Ontario premier Doug Ford’s cuts are an example of how easily the premier can dismantle independent government offices because of his party’s majority.

“I am out here in the cold because [the government’s] taking voices away from children who already don’t have voices and the government has decided that they’re not worth the money,” said Elizabeth Williams, a third-year child and youth care student at Ryerson who attended the rally.

Williams said she received several emails from professors at the School of Child and Youth Care—including program director Kiaras Gharabaghi—encouraging students to go to the rally. One professor postponed an exam to give students time to attend.

“Right now, the ombudsman office is being treated as somewhat of a kitchen sink where we put departments that we don’t really know what to do with,” child advocate Elsbeth Dodman said during the press conference. “It is a dark day for this province and its children when we balance a budget on the backs of the smallest of us.”

The OCA is especially important for Indigenous and racialized youth, said youth peer mentor Bailey Beattie during the press conference.

Indigenous youth accounted for 46 per cent of admissions to correctional services in 2016-17 despite making up eight per cent of Canada’s youth population, according to Statistics Canada data.

Finlay said she thinks the bill to dismantle the OCA will pass this week. Regardless of the premier’s near-absolute power, Finlay said the press conference and rally was important to show the voice of the youth. It’s important to take advocacy initiatives one step at a time, she added.