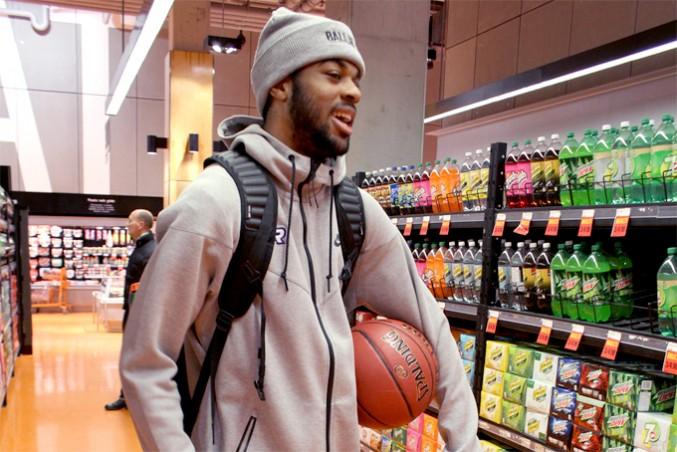 Basketball players are notorious for tradition and repetition. For instance, Michael Jordan, who is arguably the greatest basketball player of all time, wore his 1982 college basketball shorts under his Chicago Bulls jersey during his time in the NBA. And current Houston Rockets guard, Jason Terry, wears the opposing team’s shorts to bed the night before their games.

For fourth-year Ryerson Rams guard Adika Peter-McNeilly, tradition is all about family — Family Feud, that is. Each night he returns to his apartment from practice, sits down and turns on his television to watch show host Steve Harvey elicit hilarious responses from Americans on pre-recorded episodes of Family Feud.

“When you play basketball you’re putting so many hours into being on the court and you spend a lot of time off of it watching film. So you have to find time to put your mind at ease and relax. One of the ways that we do it at our house is by watching Family Feud every night,” he says.

As a spectator watching the six-foot-three guard from Scarborough, Ont., it’s easy to see that the hours he puts in on the court when he’s not watching Family Feud pay off. He’s vocal with his teammates, athletic as any player on the court (he led the Rams in minutes played per game at 31.1) and positive no matter the circumstance.

“I like helping people out. I’m a people person. I feel like being kind and being open with other people translates to the way that I play,” says Peter-McNeilly.

He says he wants to be remembered as a humorous person, someone who enjoys making other people laugh. On the court you can see how his positivity is infectious, while in victory he has a smile that resembles that of Carolina Panthers quarterback Cam Newton — a smile that was prominent during the Rams 17-game undefeated streak at home this season. That stretch included victories over Carleton, Ottawa and Brock all in the same week.

His teammates will tell you that he brings a veteran presence, which is essential to creating an environment that promotes the growth of players around him. With senior guards Aaron Best and Kadeem Green graduating, that is exactly what the team will need to succeed in the future.

“We have loud guys on the team, like energy guys, but Adika is a different type of energy. He’s always there to help guys with anything they’re struggling with,” says Jean-Victor Mukama, one of Peter-McNeilly’s teammates and roommates.

After Peter-McNeilly finishes his senior year next season, he hopes to move on to professional basketball. It’s an accomplishment that seems to be possible considering he averaged 15.1 points per game over the regular season, while also dishing out 4.4 assists and grabbing 5.5 rebounds.

For guidance Peter-McNeilly talks frequently with Jahmal Jones about making the jump to professional basketball after his university career ends. Jones was an essential member of the Ryerson men’s basketball team a year ago but now plays professional basketball in the Czech Republic for Svitavy. When Jones returned home for Christmas, the first place he visited was Peter-McNeilly’s home, which was a sign for the Rams guard that basketball extends outside of the court.

“That was a kind of brotherhood moment. And talking to him reassures me that this goes beyond basketball because while it is essential, it’s like how’s it going outside of it [basketball]?”

“We have loud guys on the team, like energy guys, but Adika is a different type of energy. He’s always there to help”

Outside of basketball Peter-McNeilly is studying toward a sociology degree, one that he plans to put to good use once he can no longer contribute as a player on the court.

“Family is a big thing for me,” he says. He eventually wants to move into the field of education, with hopes of following in his father’s footsteps as a teacher.  And through utilizing the skills he’s learned in teaching he plans on setting up a high school basketball program and serving as a head coach.

In Grade 5, Peter-McNeilly stopped playing soccer and turned all of his attention to playing basketball and attending camps to hone his game. And now in university his basketball journey has come full circle.

During his time at Ryerson, he volunteered at basketball camps at Jarvis Collegiate Institute and then at Ryerson in his second year. So his experience in leading extends beyond just his leadership on the court.

“Coaching would have to be somewhere in there,” says Peter-McNeilly. “I don’t think I could ever leave basketball. I want to still be involved, even if I’m not playing.”

This would be a logical step for him as coaching seems to run in the McNeilly family. His brother Jamie worked with Marquette University of the National Collegiate Athletic Association (NCAA) for six seasons and is now an assistant coach with the Virginia Tech Hokies, also of the NCAA. Another of his brothers, Jay, spent time at York University from 2012 to 2014 as an assistant coach.

And whether that opportunity is coaching, or a shot at continuing a career playing basketball after his time as a Ryerson Ram ends, his track record of two bronze medals at the CIS level and an OUA championship point to nothing but success.

“You can’t just restrict yourself and think you’re done at any point. You always have to live in a way that you never know where the next opportunity will be,” he says.