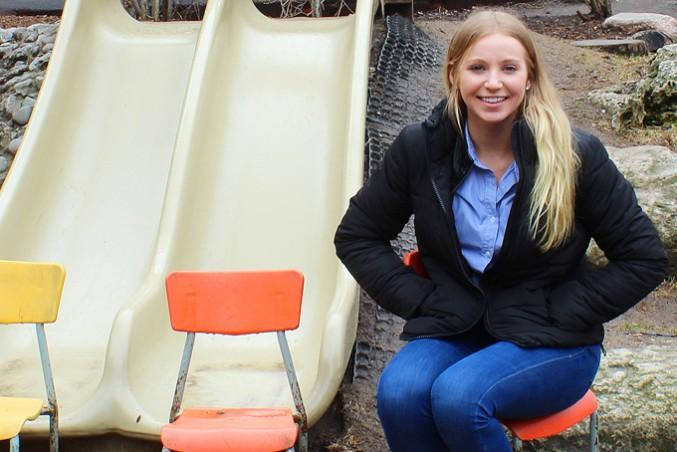 For Julie Longman, elementary school was less about playing hopscotch or foursquare at recess and more about landing a spot on the volleyball team.

“The school I was at had an amazing gym teacher. He wouldn’t let us on the team until we got 1,000 bumps off the wall,” says Longman. “Then when I turned 11 I started rep.”

It wasn’t long after making all 1,000 bumps that she began to take the sport more seriously. When she started playing volleyball in school, she was also a competitive gymnast. But after having a little taste of volleyball she wrapped up her gymnastics career and joined the Aurora Storm Volleyball Club.

“I don’t believe that there was ever a time that Julie wasn’t serious about volleyball. Her school coach gave us the contact for the Storm volleyball club in Aurora. From then on there was no going back,” says Longman’s mother Lorraine.

As the years went by, Longman snagged the number one middle blocker on her Aurora Storm team before making the switch to a more competitive team in Durham. Though she could still hit the ball as hard as anyone, all five-foot-six of her was built to play defense. In her U16 year, Longman turned her primary focus to being the best libero she could be. And when she moved up to the 17U season where Toronto hosted the Nationals and her team won gold, Dustin Reid, head coach of the Ryerson Rams, pursued her. He was the first coach to introduce himself to her and show interest in her skills as a player. Reaching out through email, Facebook, and wow-ing Longman with the facilities in the MAC, she was hooked on Ryerson and the coach — so hooked that she tossed all of her eggs in one basket and applied only to Ryerson.

“I didn’t apply to any other schools. It wasn’t just a volleyball thing it was a Dustin thing. If Dustin were to move to another school to coach I would move with him,” says Longman.

Heading to Toronto to play varsity ball, she won Ryerson’s RSU female rookie of the year award and OUA East’s Libero of the Year in her freshman year. But the third-year student was not only finding herself on the court, but also in the classroom. Recently switching her major from economics to child and youth care, Longman started to discover a “clichéd” interest in giving back.

“I want to be the positive impact on a child’s life the way that my coaches, and my teachers, and my childhood had such a large impact on where I am today. I want to be that person for other children,” says Longman.

Taking on the typical role of an athlete, she just wanted to play her sport and settled for whatever program she could get into. She quickly realized that economics wasn’t the best for her and felt that she wouldn’t be able to make it through university in this program. Like many athletes and students, Longman realized that she couldn’t be successful if she continued in her economics program.

“I’ll admit it, it was just kind of me wanting to go play volleyball. I obviously hadn’t figured it out yet,” says Longman

Being the libero, Longman has a big responsibility on the team. By often playing the first contact, she sets up the play and tone of the game. Without her insane drive for success, the team couldn’t maintain strong defense or run their killer offense. Reid is very impressed with her improvement over the years, especially with her ability to step in and set the second ball.

But it was just a matter of time before Longman had solved the puzzle of “figuring out” university. From school, to volleyball, right down to her health, Longman learned a lot in first year. After watching her teammates munch on quinoa and veggies as a protein boost, she had to re-evaluate her idea of a “healthy snack.” Coming into her first year, she had to learn from her teammates what healthy eating looked like, and once she made the connection Longman was influenced to make the changes to her eating habits. After constantly being mocked by teammates and coaches for eating chicken strips in her cubby, she ditched the nuggets and took her health more seriously. She still struggles without the fried chicken because protein isn’t her cup of tea. But as long as it’s mixed in with other veggies, she’ll eat it.

“I think over time I’ve learned that if you want to be successful in multiple aspects of university, whether its volleyball, school or just having the energy to get through a long day, food is such a big thing,” says Longman.

Former coach Kevin Hellyer who coached her for three years prior to university is still following her success and mentions how devoted she was to the sport, making a long commute from Newmarket to Durham for practice three to four times a week for three years.

“I remember we would be at tournaments and one of our team rules was to stick together and be together the entire time as a group of 10 athletes,” says Hellyer. “And she would actually ask me for permission to go off and study when we were travelling as a team.”

To this day, travel is a big part of Longman’s volleyball career and has been in the past as well. The constant road trips in university had a small impact on her game in her first year as she was adjusting to a constant change in routine. But as travel became the norm, she knew what to expect and got used to it. Asides from her childhood trip to Disney World, she hasn’t had the chance to do much travelling for personal reasons. But this year, to act on her interest in giving back, she and a group of nine other athletes are participating in a humanitarian trip to Peru in May.

“I think international travel and experience has recently become a big interest of mine,” says Longman. “It sounds really cliché but I think being involved in the Ryerson community is really important.”

With her ideal Friday night being a couch and a Netflix account, Longman is excited to go out and travel to a new place. Though she may get called the “Grandma” of the team, Longman knows what it takes to be successful, and Reid finds Longman’s drive towards success so strong that it can almost be intimidating.

And with Longman confident in the priorties she’s recognized since her time figuring out what university really meant during her first year in economics, the determination to succeed on the court has found its way into her personal life. And as Longman comes to terms with her own definition of giving back, she’ll look to her teammates and her younger self to help find the success she’s found with the ball, the net and the Ryerson Rams.