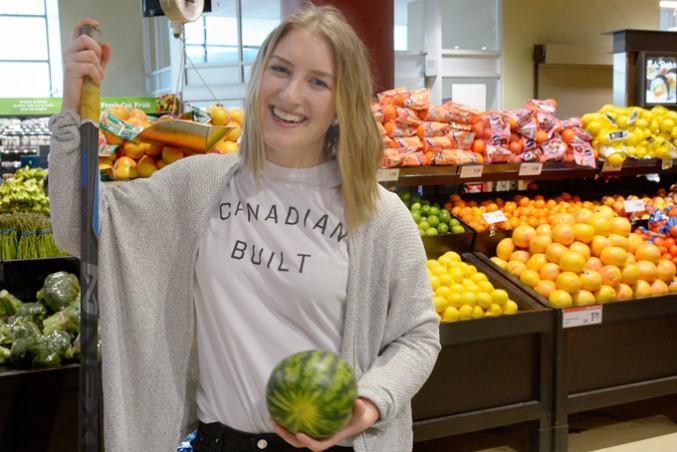 As she ties up her skates in the locker room, 12-year-old Justine Glover mentally prepares herself for not only her first hockey tryout, but her first time ever playing hockey.

As she steps on the ice, she is comforted by the fact that the coach, her friend’s dad, had asked her to try out after seeing her play ringette. That comfort soon turns to utter disappointment when the tryout starts. Handling a puck was not something she had ever done.

“I couldn’t do it for the life of me,” Glover recalls. “I was so frustrated and mad and was crying and I just got off the ice and was like, ‘I’m not playing hockey, I’m not doing it.’”

That was when she was in Grade 6. Now Glover is the assistant captain for the Ryerson women’s hockey team. The road to her position as a Ram was not an easy one either. Glover has always been an underdog. She’s always had to work that much harder for her position.

When the defenseman showed up to Ryerson as a freshman, she was trying out for the team as a walk-on that had not been signed by head coach Lisa Haley.  “Tryouts were brutal because I didn’t play junior, I just played midget AA and the gap in the speed is way faster in the OUA than it was in the midget AA,” says Glover.

For her, trying to catch up to everyone was a difficult task — Haley expressed her doubts about Glover early on.

“I told her I didn’t even think she was gonna make the team,” recounts Haley as she laughs.

But for Glover, that meant nothing. She continued to persevere through tryouts, working hard on her defensive game and making up for her lack of speed. It was her work ethic, leadership and physical style of play that helped put her on the roster, according to Haley. But what she proved in the last two tryouts might have been more important than anything — she was not going to call it quits under any circumstance.

So with cramped skates around her bruised feet, she continued to play. As she got onto the ice, the coach blew the whistle and told the women to report to one end of the ice, it was time to put their endurance to the test – it was time for bag-skating drills.

One thing Glover holds dear to her heart that she will never let go of is her dream of becoming a dietitian. Her original goal was to “work with sweet NHL or NBA teams,” but that all changed after visiting her grandma at the Seaforth Community Hospital.

After a few weekend-visits, her grandma thought that it would be a good idea for Glover to meet her dietitian and see if she could learn anything from her.

“So I scheduled a little meet and greet with the dietitian and she taught me a lot of things, answered a lot of questions,” says Glover. “I got to see what it’s like to be a part of a rural hospital community and I think it’s just like a nice feeling … to know that you can have an impact on people that are near the end of life and you know that they need to be as comfortable as possible.”

This is a dream that Glover wants to pursue with the same ambition that she puts into her sports career. She plans to earn the same amount of respect in her profession, that she has earned in the locker room.

Team captain Jessica Hartwick said that Glover deserves a lot of respect for the work that she puts in during and after practice. Whether it’s paying careful attention to the coaches during practice, or taking what she’s learned and perfecting it even after the final whistle blows.

“She always stays on the ice for extra time, when we have the opportunity to leave, she’s always staying when she can,” says Hartwick.

Glover says she worked for Hartwick’s respect  since her first year, when Hartwick was a co-captain who the players found “very intimidating” according to Glover.

The tough leadership is something that Glover was grateful to receive from Hartwick as she said that it helps teach her not to be so emotional about the game. Removing emotions and replacing them with confidence over the years has helped Glover to become the leader that she is today.

She laughed remembering the moment that Haley spoke to her in private, telling her, “Well Glover, you’re gonna be an assistant captain.”

Looking back, she doesn’t know if 12-year-old Justine would believe you if you said she’d be assistant captain for her university squad, let alone make the team. But the way 21-year-old Justine looks at it now, after she handled the puck for the first time, there was no way she could stop, broken skate and all.