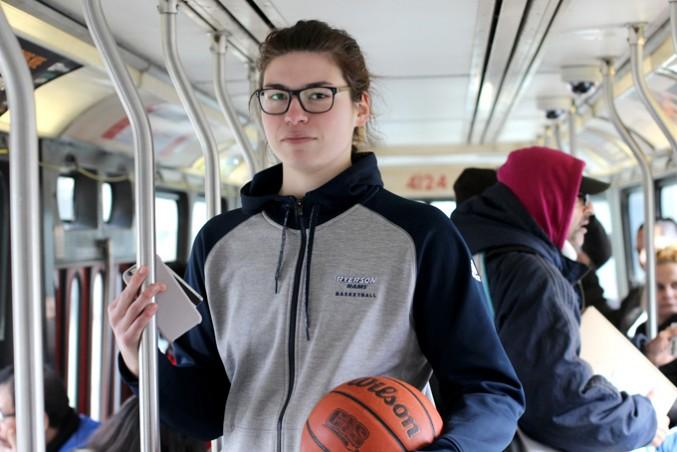 Sofia Paska fidgets in her seat at the Mattamy Athletic Centre. Paska, a six-foot-four forward, stands out in a crowd, but she is quiet and modest, and being interviewed for a “top 10 sports” article doesn’t seem to fall in her comfort zone. I’m outside of that zone, but head coach Carly Clarke says that is just how Paska is when you first meet her.

“I don’t know many six-foot-four women that are crazy vibrant and outgoing because they stand out anyway,” says Clarke. “What does stand out is when you get to know her.”

In early February, the Ryerson Rams women’s basketball team was in the middle of their final stretch of regular season games. Paska, playing in her second year on the team, found her confidence and her place as a starter on the nationally ranked team.

If you frequently attend games — despite her attempts to be low-key — surely Paska stands out. Her ability to dominate in the paint and shoot from distance makes her one of the hardest matchups in the CIS. But her on-court presence isn’t all that people are noticing.

This season, Paska is averaging 28 minutes a game, almost 10 more than she played in her freshman year, and is contributing 15 points — second only to all-star guard and senior Keneca Pingue-Giles. But her stat line is only part of that story.

This summer, Paska worked tirelessly on her game and shed 40 pounds in the process, making her increase in minutes and production possible.

Paska’s mother, Monika, attributes these changes to her daughter’s determination, but also the silent motivation received from Clarke, who she says is one of the only coaches to not bring up her daughter’s weight. Telling a player to lose weight or work harder is not Clarke’s coaching style, who says she would rather have her athletes intrinsically motivated than instructed.

“All the credit goes to Sof,” says Clarke.“She worked hard in practice and once she started seeing changes, she took it upon herself to do more.”

All summer Paska started her day getting shots up before work at 7 a.m. She cut dairy out of her diet, started eating better, added more weight training and practiced the beep and yo-yo tests — both sprint-based-cardio training. And her work has not gone unnoticed.

On an away trip to Sudbury, Paska remembers Pingue-Giles reaching out to her and praising her dedication on and off the court.

“Having her notice the hard work I’m doing is great, and coming from her, it means a lot,” says Paska. And with an increase in minutes and production, she says she feels more confident and is enjoying the process.

“The pieces of the puzzle are really coming together,” says Paska. “I’m not afraid to make mistakes anymore.”

While her stat line may stand out, Paska is very much a reserved person, both on and off the court. Clarke says Paska is “very steady when she plays,” as there are no high highs or low lows. Her calm presence carries through off the court — she is reserved and quiet unless you get to talk with her one-on-one.

Paska’s parents echo this sentiment, saying she is very shy, but when you get to know her, “You get to see that amazing personality of hers.”

“The pieces of the puzzle are really coming together. I’m not afraid to make mistakes anymore”

You would think as a varsity basketball player in Toronto, Paska would eat, sleep breathe all things Raptors. On the contrary, Paska says she doesn’t watch basketball. She loves the sport, but would rather be playing than watching, though if you offer her tickets she won’t decline. She is also different in regards to her pre-game ritual. While her teammates are getting ready and dancing to Drake, Paska says she sits.

“Siki [Jez] always tries to get me to dance, but I haven’t yet,” laughs Paska, who says her favourite night is ‘90s night because it’s more her taste of music.

While being a student athlete can be time consuming, the biggest component of Paska’s life is her family. When she isn’t juggling her course load in Ryerson’s early childhood education program, she says she spends what little spare time she has with her parents Monika and Ihor “Moose” Paska. “Sofia is a real homebody, just like her father,” says her mother. “They are two peas in a pod.”

To say their family is close is an understatement. Paska’s parents have devoted endless hours to their daughter’s passion for basketball and have never missed a game. They have courtside seats to every home game and even travel for the away games, regardless of the distance. “They have achieved so much so fast,” says Monika. “We would not want to miss seeing any of it firsthand.”

By the end of our conversation, Paska is no longer fidgeting. She is smiling, joking and letting me see the personality her friends and family speak so highly of. Paska is still growing as a person and coming into her own. In a span of 10 minutes she let me in her zone, and in one summer she became a force to be reckoned with. With such quick improvements it may be easy to forget about her youth. Only in her second-year, Paska is primed to lead this Rams team.