Alex Colville said that “all real artists are brothers and co-workers in different generations.”  Perhaps this is why Susan Cox, an artist who began her career in the turbulent ‘60s, felt that an musical celebration of peace, love and plenty of drugs could be embraced by a cast of Ryerson students in the neurotic ‘90s.

Of course, Cox was right.

Cox, the director of the Ryerson theatre school’s fall production of Hair, has had a distinguished career.  A former faculty member of the theatre school, Cox has acted and directed her way across two continents.

When hired to do the fall production at Ryerson, Cox got to choose the show.  She says she picked  Hair not only for its theme, but also because it is an excellent ensemble piece, which makes it well-suited to a school production.

“Unlike most shows, we already had a company of actors.  You have to pick something that will work with the people you’ve got,” she said.

And boy, does it work. 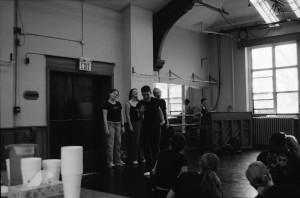 From the opening bars of “Age of Aquarius” to the last note of “Let the Sunshine In,” the audience is treated to a psychedelic parade of characters so well-crafted that it’s hard to believe most of the actors weren’t even born when Hair was first presented.

Ryerson hasn’t done many musicals in the past few years.  Cost and the technical difficulty are two major obstacles.  Another issue is talent.  But this season, the third-year students proved to be a crop of musically gifted actors, giving Cox the chance to mount Hair.

Auditions for the show began the first day of school.  Actors sang and performed monologues, grasping for the glory of a solo part.  They’ve been rehearsing long hours since then, in preparation for opening night on Friday.

The organized chaos of rehearsal makes little sense if you are unacquainted with the creation of a show.  In rehearsal, you might see a group of actors, dressed in black, marching in a circle.  Or one looking into a mirror and making faces.  Or three practicing what appears to be a drug-induced pas-de-deux.  All of this amongst the clamour of five different songs being rehearsed at the same time.

And then there is the confusion of actors playing more than one role.

“Are there any boys free to be a nun?”

Despite her more than 30 years of experience, even Cox is not immune to the occasional good-natured jibe.

“No respect!” Cox exclaims in mock horror, while a remark puts the cast in hysterics.

Actors Kesta Graham is happy to have such an easygoing director.  “Sue lets us have those funny moments.  We joke to keep the tension down.”

Graham says having fun at rehearsals is important because of the schedule they keep.

“We’re here every day from 2 to 10 p.m.  It’s hard to find time for a life or even do normal things, like grocery shopping.  The show and the music are very challenging, but it’s been so much fun.”

Cox knows the theatre can be a cruel mistress.  She recognizes the strain put on student actors.  However, it doesn’t mean she isn’t above a few good-natured jabs of her own.

“They’re not a bright lot,” Cox says with a smile.  “But they’re very talented.” 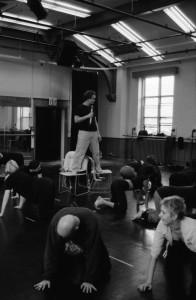 The basic plot of Hair is not complex.  More or less, it is the story of a “tribe” of hippies and their lives in the late ‘60s.  Various conflicting relationships surface during the course of the show.  Fighting the establishment, bizarre love triangles and the Vietnam War are all explored in the play.  Though some have said Hair is outdated, the actors say they found most of the themes still relevant.

“None of us remember Lyndon Johnson,” says Graham.  “But the themes are relevant today.  In some cases, we know even more than the hippies did.  Kids still rebel against their parents.  It may not be burning a draft card, but we still rebel.”

One question remains.  The script calls for nudity.  But do the actors get naked in Ryerson’s production?

According to actor Brian Sills, there is really only one scene that has any nudity written into it.  Sills says that after discussion, the cast and director agreed that nudity wasn’t central to the plot.

So are they naked?

“Well, some of the costumes are pretty small,” says Graham.  “I hope I don’t fall out of mine.”

According to publicist Tina Brennan it’s against theatre school policy to force anyone to do a nude scene.  When deciding whether or not to include actors in the buff, she said it came down to asking the question at a rehearsal:  “Who wants to get naked?”

The cast and crew are tight-lipped about what the audience will be “exposed” to, but they cheerfully encourage people to see the show and find out for themselves.