There are gardens in the new district, but most residents are hesitant to picnic in them

You may not know it by staring around at the bland concrete or greeting the homeless drunks on your way to class, but Ryerson University sits right in the middle of what is now known as the Garden District.

Last September Mayor Mel Lastman officially announced the area east of Yonge Street, south of Carlton, west of Sherbourne and North of Queen Street would no longer be considered run-down.

“People cringe when I tell them I live and own a property in this neighbourhood,” said Ursula Devolin, who brought a house in the Garden District in 1999. Her home on Shuter Street sits directly across from Moss Park, one of the parks a Garden District Committee plans to rejuvenate.

The park is under constant police patrol but is still littered with everything from garbage to drug dealers to local prostitutes.

Devolin said a move to change the perceptions of the neighbourhood couldn’t come at a better time.

“I’ve witnessed prostitutes having sex in the park,” she said. “I phone the police when I see people selling drugs but sometimes it takes them over an hour to get here. Sometimes I just can’t wait around that long.”

Toronto Star urban affairs columnist, Christopher Hume, said any restoration to the east-end can only benefit the community.

“People don’t respect a landscape that’s shabby,” he said. “This part of the city has been neglected for so long and it’s one of the most historic areas of the city. It’s about time to pay attention and reverse the decline.”

About two years ago, a group of residents and businesses spearheaded a campaign to restore downtown Toronto’s east-end.

A Garden District Committee has since gone to City Councilor Kyle Rae, who wants to see the area restored to the days when it played host to some of the richest families in Toronto.

Rae’s executive assistant, Michael Robertson, has made a $10-million promise towards the rejuvenation of Allen Gardens over the next five years.

“As long as the money is there, we are committed to this project.”

But Robertson hopes businesses in the area, including Ryerson University, help reach out to the community.

“Down the road we hope Ryerson will become involved,” he said. “The community really likes it when Ryerson is involved because there is expertise within the faculty and student body. Their energy and enthusiasm can only benefit the project.”

Ryerson President Claude Lajeunesse was at the Garden District inauguration but hasn’t been contacted by the Committee. Linda Grayson, v.p. of administration and student affairs said the university won’t become involved until it is directly asked.

“Anything that improves the quality of the neighbourhood the University’s position would be to support that,” she said.

This may not be the case. It appears a deal Ryerson struck previously with Toronto’s East Downtown Neighbourhood Association (TEDNA) has fallen through.

In 2000, RyeSAC president Erin George signed a contract with TEDNA leasing of a small office space in the yet-to-be-built Student Campus Centre for a dollar a year.

The lease was contingent on a million dollar donation to Ryerson from Councillor Rae’s office. A donation Ryerson never received.

RyeSAC’s v.p. of finance and services Ken Marciniec said that because Ryerson never received the money, TEDNA won’t receive their space for a dollar a year.

Regardless of issues between TEDNA and the university, other neighbourhood associations are looking to Ryerson for support.

“All we are really asking for is a little help from people,” said Garden District Committee member Milone. “We’d love to get the school, the faculty and students involved with their own neighbours.”

The committee plans to continue its initiative right through Ryerson’s campus, adding a little greenery to the university’s concrete façade. The Committee is also proposing to adopt the label Garden District on all streets signs in the area, much like Cabbagetown or the Annex. 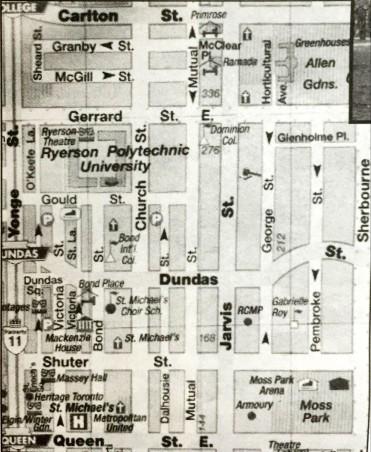