Two mad men were the first (and probably the last) to order a beer at Sunday's opening of the Hard Rock Cafe. The relaunch of the restaurant featured a free performance by Toronto band Big Sugar.

The Hard Rock Café threw and old-fashioned rock and roll party at the corner of Yonge and Dundas Streets Monday to celebrate its grand reopening.

The newly renovated restaurant boasts and a second-floor night-club and storefront Q107 radio booth. It is the first completed project in the much-delayed Yonge and Dundas redevelopment.

“If there’s any place it belongs in this city, it’s at Yonge and Dundas,” says Toronto City Coun. Kyle Rae at the restaurant’s launch.

Restaurant owners spent more than $5 million on renovations over the last six months.

The opening of the Hard Rock Café will affect future plans for rebuilding in what is widely considered the heart of downtown Toronto, Rae says.

“An international business such as the Hard Rock has invested in Toronto, particularly this corner,” he says. “They could have moved but chose to stay on site because of what’s happening across the street.”

Since 1996, the city’s been putting together a plan for the redevelopment of the Yonge and Dundas corner.

A new underground parking lot has been built, but developers have yet to break ground on a 24-screen AMC movie complex and retail centre. Rae says that project will be completed sometime in 2003.

The re-opening of the Hard Rock Café is the first major step in the redevelopment plan. Rae says the facelift gives new stores an incentive to move into the area.

Corus Radio and CityTV saw the potential in the Dundas corner and decided to get involved in the redesign of the Hard Rock Café.

J.J. Johnston, the Toronto market manager and v.p. of programming for Corus radio wanted to move Q107 into a more accessible area of Toronto.

“When Q107 moved up North, we became non-accessible,” says Johnston. “Our new relationship with Hard Rock has brought classic rock back to Toronto. The Hard Rock Café and Q107 are all about music, it’s just a great fit.”

Q107 will broadcast live from the Hard Rock Café from 3 p.m. to midnight daily.

CityTV plans to erect a 10-metre-long video screen on top of the building and would like to broadcast a 24-hour video feed.

The inaugural ceremonies started off in true rock’n’roll style Monday afternoon with a live outdoor performance from local favourites Big Sugar. The block party attracted hundreds of fans and closed off part of Yonge Street near Dundas Street.

Gordie Johnson, lead singer for Big Sugar, says he was excited to play for his hometown crowd.

“The Hard Rock asked us really nicely if we would play for them tonight,” says Johnson. “How could we say no to our hometown crowd?”

The emphasis on guitars is carried through to the décor inside the restaurant. Guitars from artists’ such as Tom Petty, Aerosmith, The Rolling Stones, Lou Reed and Eddie Van Halen are on display behind the bar on the wall of power — an audio visual and graphic wall featuring 45 plasma screens.

Chirs Holt and Dave Black were so impressed with the wall that they decided to skip work and spend the day at the Hard Rock. The two machinists were the first people to get a drink from the new Hard Rock Café bar.

“It feels pretty good,” says Black while sipping the first beer served from the bar. “I’m looking forward to coming back.” 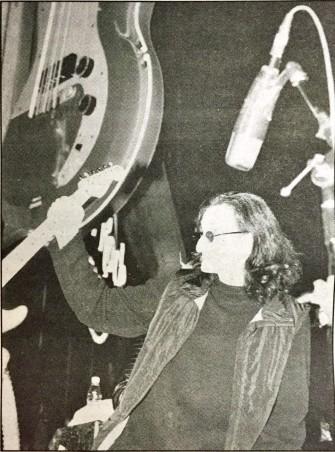