I'll trade you four rubber bands and a funnel for three rolls of duct tape and a saw.

Forty engineers hammer, saw, and fling their way to victory in the first annual design competition

An orange puck painted with a RyEng logo flies through the lower gym. Seconds later, another puck with a grinning happy face soars after it and bounces off the ceiling. Within seconds the air is filled with colourful projectiles, some wrapped in tinfoil, others dragging colourful parachutes. Below the raining hockey pucks, a crowd of engineers armed with make-shift slingshots aim their ammunition and let them rip.

The gym’s atmosphere is chaotic, stunned bystanders try and figure out what’s going on amidst the banging of hammers and screech of saws. This isn’t a new extreme sport, but last Friday’s first annual Ryerson Design Engineering Competition (RYDEC). RYEDEC’s executive members are second year engineering students inspired by the television show Junkyard Wars and the Ontario Engineering Competition (OEC) to start their own design competition.

“We’re hoping to reintroduce design and communications aspects into the school to simulate the real-world industry,” said Grodecki.

Just past the doors of Ryerson’s lower gym sits a table covered with small wooden toothpicks, plastic cutlery, huge garbage bags, duct tape and springs. In the hallway, another table holds wood of all sizes, hammers, a saw, a drill and various other building tools. Inside the gym, 40 students are busy hammering, sawing and sketching designs. Within hours, orange pucks start flying back and forth from every direction.

Their group invited two Ryerson professors and a technical officer to judge the competition. “For engineers, this is a fundamental tool,” said mechanical engineering professor David Naylor, “there has been an amazing amount of effort put into this and it mirrors other competitions.”

Once the 10 teams of four have been registered, Zeinalov walks up to the microphone and explains the challenge to participants of RYDEC’s first competition. Starting at 2 p.m., each team has two hours to build a self-supporting projectile-launching device from any of the materials provided on the tables. The teams then have to present their design to the judges and demonstrate the launching device by trying to hit a target 10 metres away.

Zeinalov explains that points are awarded to teams based on the projectile’s airtime (the time it takes for the projectile to land after it’s been launched) and its proximity to the target. Organizations, construction activity, problem solving and contribution of team members are some of the qualities judges look for in a good team. 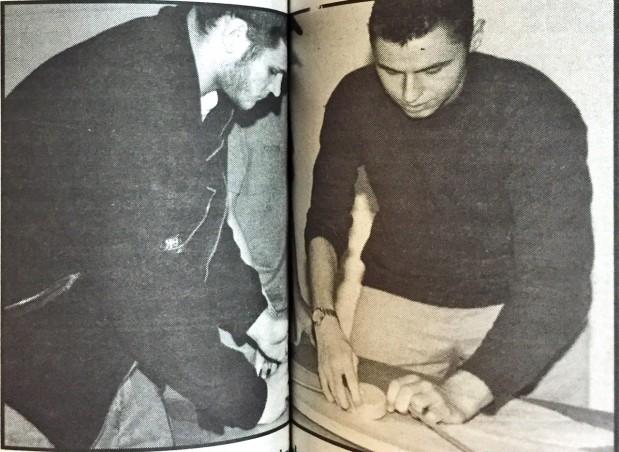 Think the challenge sounds easy? Not quite.

Each team is also restrained to a budget of 200 points, which they must spend on materials for their design. Teams who exceed their budget get a lower score and teams whose budget is under 200 get a higher score.

Each piece of material is priced anywhere from one point for a toothpick or a rubber band to 100 points for a bungee cord. There is even a cost for the use of building tools. A saw costs 10 points per minute.

Amanda Vasquez-Peddie, first-year aerospace engineering student, is surprised. Like most other students who have never participated in competitions such as this, she didn’t realize that materials actually cost points.

However, RYDEC’s executive members believer that this added obstacle makes the design and manufacturing process more challenging and helps simulate real-world experience in the industry.

Each participant takes the challenge competition very seriously, but everyone savours the opportunity to take a few hours off from doing schoolwork.

“This is a whole new experience for me. I’m in my first year at Ryerson and I want to try and participate in these kinds of activities,” said Emilijan Merceska, first-year electrical engineering student. Her team is busy making their puck into a parachute in hopes that it will land smoothly and prevent it from bouncing away from the target.

A group of curious students watches in amazement as the groups test their spontaneous designs. Tania Petrov, a first-year aerospace engineering student, came to watch the event and it very impressed. She says she would like to participate in the next competition.

She wanders among the teams, watching Team One builds a device out of an orange tunnel and many rubber bands bound together, and other teams try and incorporate bungee cords and metal springs in their designs.

Outside the gym, students are sawing, drilling and measuring wood as one of RYDEC’s executives keeps track of their times.

Devin Ostrom is a technical officer with the departments of Mechanical, Industrial and Aerospace Engineering and helps students with robotics projects in the Control Systems Lab. He’s another judge in this competition and is very impressed with RYDEC and the organization of the event.

“This is Junkyard Wars for students,” he said, “I think it’s a great idea and there should be more of these things. Ryerson is known to be a hands-on university and this is a great opportunity for students to apply their knowledge.”

At four o’clock all building stops. The club’s executive members call each team to the judge’s desk and the event takes on a serious tone as the groups give a short two-minute presentation of their designs. On top of the fundamental principles of their design, each team is also awarded points on the basis of their presentation and teamwork, so any screaming in the heat of battle has been noted on official scorecards.

And then the moment of truth — teams must demonstrate their design. The target is a purple (the colour of engineering) brick that rests in the middle of a blue plastic mat. The teams aim carefully and begin shooting the pucks.

Once a team has launched the puck, the projectile airtime and the stopping distance from the target are measured by one of the club’s executive members.

An hour later, all the teams have had a chance to demonstrate their designs and the overall results have been tallied. To achieve the most throwing distance with the least amount of materials and construction, most designs were similar — simple wooden frames outfitted with rubber bands, which they stretched like a makeshift slingshot to launch the pucks. The top three teams had scores within 15 points of one another, proximity to target being the deciding factor.

Team Four, made up of four first year aerospace engineering students, won the competition with a total of 285 points. Waleed Hendricks, William O’Brien, Graeme Young and Alex Zbarcea were surprised at their victory. 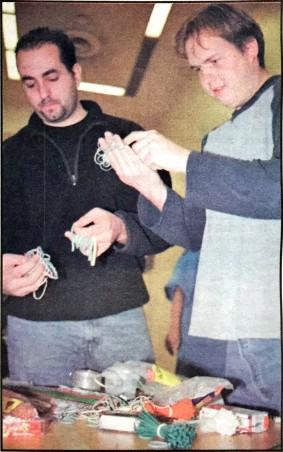 Hey man, bet I can fit more elastics on my hand than you can. Photo: Tracey Tong

“We didn’t think we were going to win because this was our first time and there are a lot of people with more education,” said O’Brien.

Their design is close to that of team two and they used similar materials to build their device, but the landing distance of their projectile was closer to the target than that of all other teams. The airtime of the projectile was also the best for this particular design.

None of the four members of team four have ever participated at an event such as this, but after having experienced RYDEC they said they would certainly participate in other such competitions in the future.

RYDEC’s four executive members are happy with the way this competition has turned out and that they have been able to recruit a large variety of participants from different engineering programs and different years.

“I think it’s a success. It’s a little chaotic, but very successful. We got more people here than we thought we would and I’m glad it turned out like this,” says Grodecki.

Since the number of teams are limited, several students who arrived late did not have time to sign up their teams, but the club’s executive members are hoping to host another competition early next semester and are looking to expand the event and the number of teams.

Grodecki also explains that participants do not necessarily have to be engineering students.

“We hope to have a better variety of students from different programs for the next competition,” he said.