Lots of practice and perseverance as a kid gets second-year journalism student Silk-Anne Kaya recognition and inspiration for her rhymes.

In the hip-hop scene she’s Eternia, an aspiring white emcee, who is gaining momentum. At the age of eight she started reciting lyrics and creating her own material.

Now, Silk-Anne Kaya, a second-year journalism student, of English, Scottish and Assyrian decent, is recording her first full length album, expected to be released in 2003.

The twenty-one-year-old is recording with Toronto’s Tought Dumplin Foundation/ Apollo Records. Still creating, she is in the midst of collecting the beats and writing the rhymes. She has four songs recorded and plans to have 12 tracks on the album. The beats are by MC Collizhun (of Nefarius) and Kaya does all the rhymes.

“I will always be growing as an artist,” said Kaya. “I still have learning to do. As an emcee you always push yourself and that is how rhymes come out good.”

She is focused on her content, lyricism, delivery and style.

“She stands on her own and shows a lot of strength,” said Collizhun, who she met in the hip-hop scene in Toronto in 1997.

“You hardly think that she is capable of it but she can just go up there and spit it,” he said. 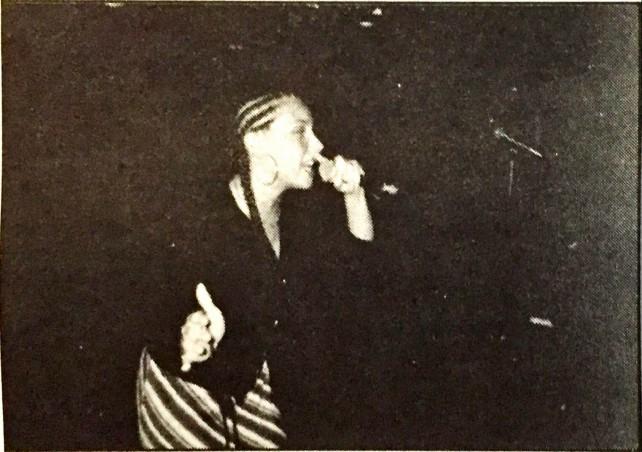 She’s opened for a long list of performers including Choclair & Thurst, Common, D12, Blackalicious and Del the Funkee Homosapien.

“You have to be the best. You can’t get by just by being alright,” said Kaya.

Until 1994, emceeing was just a hobby. Then Kaya decided to take it to local nightclubs and radio stations. The promotional track “What We Gonna D” with artists MC Collizhun and Adversaree the N.M.E. was recently released.

Leaving home at fifteen because she didn’t get along with her mom, Kaya dropped out of high school, but returned two years later.

“Hip-hop wise, leaving home was very formative. It was because I wasn’t living at home that it happened,” she said. “I was going to all these crazy places that most kids don’t go.”

She moved around every two months, bouncing from place to place without a real home. She lived across North America, with friends, in places like London, Ont., Georgetown, Brampton, Connecticut, New York and currently Toronto.

At 16, she moved to Connecticut to live with a boyfriend. He was a big influence in her pursuit of a hip-hop career.

“He’d say ‘rhyme,’ and here I am a white girl from Canada and he is making me rap in front of these kids who had been doing it a lot longer than I have,” she said.

She tightened her skills in street ciphers (rhyming circles on street corners or in school hallways) and studio sessions.

“I just kept on doing it and getting better, horning my skills, putting myself around people who were talented and they raised me in the art of doing it right,” said Kaya.

She recorded her first songs in Brooklyn with recording artists the DemiGodz (including artists Apathy, Jedi and Naptron). They are now with Bronx Science.

She also recorded a track with the group Jedi Mind Tricks, in Philadelphia; and she had s spot on Moodswing 9’s Mix Sessions released in 1998. She appears on Bomb Shelta’s Seven Deadly Ciphers, Lo Kreepaz Reserve Your Place, and Nine Leaves’ HipHolocaust. Kaya is featured on the track Rhymin’ for Dummies, of the Atomz Family Prequel.

“When I came home from Connecticut and New York, I was a much more aggressive artist,” said Kaya.

She’s rocked rhymes from subway cars in the Bronx, and ciphers outside of Nuyorican Poet’s Café (Manhattan) to NYC venues of all sorts (Wetlands, S.O.B’s, Bowery Ballroom, Baby Jupiter) to the small towns of New Jersey, Massachusetts, Connecticut and Philadelphia.

It was back in 1988 that her older brother, Graham, introduced her to hip-hop through Public Enemy, NWA and 2 Live Crew. Her brother’s music tastes changed but she fell in love with hip-hop.

“Kids that knew me when I was nine-years-old knew that I rapped,” she said. “At that time I was mimicking what I heard on the records.”

At 13, she delivered her first rhyme written for her boyfriend at the time, in Connecticut.

“He was so proud of me. He was like putting me on the phone with all of his friends and saying, ‘listen my girl raps,” said Kaya. It was all about how much she liked him, she said.

“I wasn’t writing it to become a hip-hop artists,” she said. “I was writing it because it was natural.”

Kaya was born in Ottawa on May 13, 1980 to extremely musical parents. Her mother plays sings and plays the piano and the guitar. Kaya can play the piano, flute and classical guitar.

She returned to Ontario to finished high school, living on her own with help from a government program that offered financial assistance to students. She had skipped a grade, which enabled her to finish high school with people her own age.

“You get really strong when everyone tells you that you are going to be nothing,” said Kaya.

She is a member of the Golden Key International Honour Society — a non-profit academic honours organization with chapters at more than 300 universities.

“If I could support myself doing music I would probably leave university, although I love being here,” said Kaya. “I am here because I need a practical job that will pay my rent when I grow old if music doesn’t work out.”

She said she tries to keep her writing and music separate. “I am, first and foremost, an artist and an emcee,” said Kaya.