Fourth-year fashion design students have spent all of last semester researching, planning and drawing the 50-or-so collections that will be displayed at the gala show in April.

The collections will be presented in three separate shows to friends, family, students, and roughly 11,000 members of the fashion industry and the press.

“It’s an opportunity for the industry to see what students are doing, to take notes, and often, to hire students,” says Mary McCrae, director of the fashion program.

The fashion design students were given freedom to shape the concepts behind their collections with inspirations that range from fabrics to history to films and family.

Things are starting to take shape now as designers thread together their ideas — many of which they began thinking about last summer — and create the garments and costumes that they have been waiting to make their whole lives.

The Greek and Roman style lines in Brook Alviano’s collection emerged as she found herself staring at clothes at her summer job in a clothing store. Watching the movie Gladiator hundreds of times influenced the regal costuming, the bubbly Alviano says. Her lust for mixing textures breaks through in the pieces that combine wool, fake suede and chiffon that drape and flow over the body.

Alviano started creating outfits with paper dolls when she was a child. She graduated to making her own ensembles for high school dances and the prom. The responses to her work were the best part. “The look on people’s faces was worth it when they would as ‘Where did you get that?’ and I’d tell them that I made it,” says Alviano, who is excited that Mass Exodus is giving her the opportunity to present her work in a big finale. “I’ve never seen my work on the runway before.”

The pieces in her collection are all named after Greek gods of wind. “I freaked when I heard that other designers were doing Greek- and Roman-inspired clothing,” says Alviano. But she says she was committed to her concept and decided not to sway from it.

Walking through a flea market last year, the chair upholstery jumped out at Jeremy Laing. In his mind, he was transported back more than 200 years to the angry mobs storming the Bastille during the French Revolution. Instantly, he though of the fourth-year runway show.

That piece of fabric, says Laing, whose sketch is featured above, was the basis for the colours he is using in his five-piece collection. It’s inspired by social activism and the use of propaganda in the overthrow of the French monarchy. His unisex garments feature upholstery, bed linens and chandelier crystals.

“I try not to get influenced by what other [designers] are doing,” says Laing, referring to what’s hot on the runways. Some of the pieces can be altered by the wearer such as the reversible garments.

Laing spends most of his time now in the fashion lab, working furiously to meet looming deadlines. But he’s no stranger to working with clothes: Laing learned a lot about sewing from his mother. At 12, he started making clothes for himself and his sister. He doesn’t want to admit, though, to any of the favourite creations that he wore.

“We’re finally doing what we’ve always wanted to do” 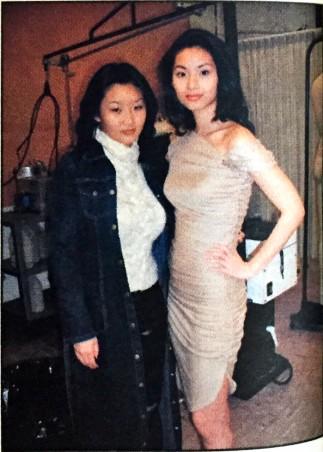 Annie Lam (above left) recalls the elaborate dresses, magnificent headpieces and colourful makeup of the Chinese operas she attended with her grandmother as a child.

It’s the opulence and grandiosity that she took from it and applied to the collection made of metal mesh that she will showcase at Mass Exodus. Lam describes the collection as attention getting and not for the body conscious.

“I just though that it would be really original,” she says. She’s been working since the summer when she started her fabric research, sketches and pattern drafting. Lam says she’s feeling the pressure though. “This is the first time I’ve put an entire collection together,” she says. “We’re finally doing what we’ve always wanted to do.”

Julie Griffiths didn’t find inspiration for her Mass Exodus collection in fashion coverage or in fabrics but in her three-year-old daughter Silvan.

When Griffiths, a single mother, isn’t at Ryerson working on her collection of children’s dress-up costumes, she spends her time with Silvan.

The medieval costumes of kings, queens and even a red dragon that Silvan is coveting can be worn for play and then easily adjusted into everyday clothes.

Griffiths started sewing at 10 years old and can remember her first project. It was a father and son teddy bear with grey fur, black paws and ears. The deadline that year was her mother’s birthday. She never got around to completing the set with a mother and daughter bear costume but thinks it would be nice if her daughter completed the set one day.

Now, Silvan has picked up the skill that both Griffith’s mother, aunt and grandmother possess. She has been learning to sew since she was two.

“She’ll sit on my lap and push fabric through the sewing machine and she’ll also push the pedals,” says Griffiths.

Showing her family a collection that is an accumulation of four years of work is very important to Griffiths. She is also thrilled that her daughter will be walking down the runway at the Mass Exodus show.