Daniella Remy takes to the ice at the Toronto Invitational. How graceful.

Ryerson Rams figure skating coach Matt Solarski focuses a keen eye on skater Daniella Remy, Saturday, as she ice dance to The Starlight Waltz. In her last competition she placed second, today he is hoping for an improvement.

As she comes off the ice they both know she wasn’t at her best. “I messed up,” she says.

While she waits for the results to be posted she says she expects fourth place.

Solarski didn’t have great hopes for his team entering the day, but he hopes Remy places in the top three. High finishes are rare for a Ryerson team most people don’t even know about. Ryerson is among the weakest teams in the 10-tam field. And with only 12 skaters, they don’t even have a skater for every event.

“During our tryouts we only had twelve girls try out for the team, so we took everyone we could,” Solarski said.

It’s hard for Ryerson to compete with the other teams that a roster twice that size when they don’t compete on an even playing field.

“The girls train hard, they have a lot of heart, [and] they love skating,” he said. “I wish I could give them more in terms of ice time. It’s tough to compete against the big universities like Queens, Western and Waterloo without the ability to train properly. They have the money.”

Money has been an issue for many of Ryerson’s smaller teams this year.

Solarski is optimistic about the future, however. Ryerson is an up-and-coming team. Most of the skaters are in their first or second year.

Remy is one of the reasons why. A second-year early childhood education student, she quit her job to concentrate on school and skating. She has only missed one practice this year, “and that was because I set my alarm for a.m. instead of p.m.”

She was a late starter in figure skating, not training until she was 12. Now she is hoping to win a medal in the February skating finals.

Still, she tries not to take skating too seriously, “It’s like a big group of friends we just go out there and skate. I feel like it’s not training, it’s not competition. It’s just a group of people going out to a public arena for fun.”

At the end of the day, her fourth place prediction proves correct. When the officials post her result, it upsets her.

“I wanted top three,” she mumbles, after her friends and coaches give her a hug. “I was expecting fourth. I know I can do better.”

Later, Solarski is treated to a top three in a four-person dance routine. The girls didn’t take the event seriously, and were laughing at their mistakes through part of the routine.

The team decided to enter the event only two weeks before the competition and they beat teams that had been training all year.

“That event just proves that we have the talent to be up there with the number one teams, we can beat them,” he said. 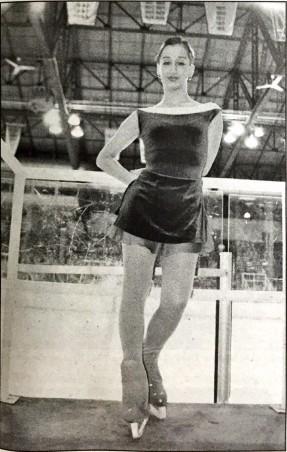 Later in the day, another member of the team waits anxiously for her turn on the ice.

While she waits, Sara Laurendeau can hear the music of the other skater echo through the hallways of the Varsity Arena. She never watches her competitors before she figure skates.

She blocks out their music and visualizes her routine. In her mind, it’s perfect every time. Nine skaters are ahead of her. As the last one finishes she rushes onto the ice. She takes her starting position and awaits the music. She tells herself to focus, but there is a delay before her music begins and she loses her timing. She looks up at her team sitting in the crowd to break the tension. They notice and cheer.

They’re the only ones who cheer her on. Figure skating competitions have strange crowds. Each of the ten competing teams has their own section and they don’t cheer for each other. As each team’s skater steps on the ice a different section of the rink bursts into annoying Backstreet Boys-like cheering.

Laurendeau’s music starts and it’s quiet again. The other skaters have used traditional figure skating music — orchestral and music with melodic beats. She skates to Metallica.

“I love the instruments,” she says. “They’re one of my favourite bands.”

Noting about the fashion student’s performance is routine. Where other skaters are graceful, she is rigid. But it works. She dazzles the crowd.

Above the rink, five judges peer down. Laurendeau knows they might favour a traditional routine, but she blocks those thoughts out. ‘Concentrate,’ she tells herself after completing an axle.

Her coach Lisa Brousseau is impressed.

“Her expression is great. She’s a beautiful skater,” she says.

Laurendeau has brought a large group of family and friends to watch the event. They are hopeful now. Laurendeau doesn’t know it, but everyone before her has fallen. The judges know it too. She can skate to whatever music she wants. If she lands all the jumps, she wins.

Her next jump is tough — the double lutz. She attacks it, but doesn’t land it. “I fell hard,” is how she describes the result. But she hops up, just as she has been trained to do.

“I focus on what I’m doing now. I forget about what just happened,” she says.

A spin is next. It’s a simple move for Laurendeau, she’s been skating for 14 years, but she rushes it. Off balance, she has to hop back into position. In the judge’s eyes, this is a terrible mistake. Her friends cheer her on.

Now she thinks of the judges. She decides to try the failed jump again. Her body is tired, it’s a three-minute routine. This time, she lands it, not perfectly but she lands it.

In the lobby they post her score — third place. Top three was her goal.

“I jumped up and down and hugged my family,” she says after the competition is over.

Later she duplicates that result in the four-person rhythm dance.

“It’s been an amazing day,” she says.