Raptors star Hakeem Olajuwon, centre, sits with Dr. Jamal Badawi, left, and an event organizer. 'The Dream' was at Ryerson to speak about Islam, terrorism and Bill C-36.

Toronto Raptors star Hakeem Olajuwon told a Ryerson theatre packed with members of Toronto’s Muslim community to remain united and “take the lead” in light of the events of Sept. 11, last Saturday.

“Each one of us has a responsibility to represent Islam in our own way,” said Olajuwon to the crowd of more than 1,000 at Dream Event 2002. “We can’t follow leaders that have no knowledge of our religion. So we have to take the lead.”

Olajuwon, a devout Muslim, was one of five people discussing Islam, terrorism and Canada’s Bill C-36 at the event co-organized by Radio Islam and the Ryerson Muslim Students Association (RMSA).

Yasir Hussain, a United Muslim’s volunteer who helped organize the event, said its purpose was to unite Muslims in the community.

“The terrorist attacks brought Muslims down. Not only are they losing faith, but they are ashamed of their identity. We want to let people know there is a voice for them.”

Andrew Telegdi, the Liberal MP from Kitchner Ontario who voted against Bill C-36, opened the discussion by naming some of his heroes: Mahatma Gandhi, Martin Luther King and Nelson Mandela.

“As I speak about Bill C-36 I cannot help thank that various sections of the bill could have been applied to them,” he said.

The controversial anti-terrorism bill, passed after the attack on the World Trade Centre, gives unprecedented powers to police and government agencies, including the right to hold persons without a charge and freeze the financial assets of suspicious organizations. 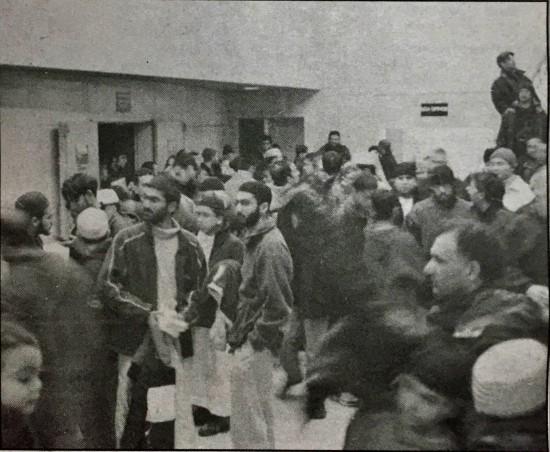 Dr. Jamal Badawi, an Islamic scholar and professor of economics, uncovered some of the myths surrounding western interpretations of the Qu’ran, the holy book of Islam and the Muslim faith.

He also encouraged the mostly Muslim audience to be proud of their faith and not allow journalists or politicians to dictate how they practice it.

“We don’t need any politician to come and tell us that you are good boys… so long as you worship in mosques,” he said. “That has nothing to do with the public life or conduct of the faith. We want to define Islam, we live our life in accordance, with our sources like the Qu’ran, and we will take our advice from the people who know better about Islam [not non-Muslims].”

Olajuwon, twice named the NBA’s Most Valuable Player, did not comment on RMSA’s ongoing struggle to find a Friday prayer space, although he sent a disapproving letter to Ryerson’s administration last December.

In the letter, the seven-foot-tall Raptors centre notes the inadequacy of the alternative suggested by the administration, and urges Ryerson to “assist them [RMSA] in fulfilling their religious obligations.”

Despite Fire Code regulations that prevent the 400-member RMSA from using the Multifaith Centre for group prayers, v.p. administration and student affairs Dr. Linda Grayson continue to reject the RMSA’s request to use the unoccupied lower gym, in West Kerr Hall.

In a meeting on Nov. 5, 2001 she suggested holding prayers simultaneously at different time for Friday prayers at the Multifaith Centre, or exploring prayer options at mosques off campus.

Dawud Wharnsby-Ali, an artist and educator who spoke at the Dream Event, agreed with Olajuwon that these suggestions were less than ideal for Friday prayer, a day of congregation not solitude.

“The purpose of Friday prayer is different than the other daily prayers in that it’s meant to bring the people together,” said Wharnsby-Ali. “The purpose of prayer would be defeated if people were divided up.”

He says that Ryerson’s argument that the school is secular and therefore isn’t required to accommodate Muslim students is a weak excuse.

Hussain said that if the students were not given a space to pray, the United Muslims would assist the RMSA in seeking legal action against Ryerson.

The RMSA has not responded to inquires on the situation, or made any official comment regarding the pursuit of legal action.