It wasn’t pretty. In fact it was downright bloody, but with a dramatic flash, the Ryerson Rams advanced to the playoffs for the first time in 10 years.

After 40 minutes of sloppy, uninspired play the Rams had to find a way to claw back from a two goal deficit in the final twenty minutes of their Friday game against Queen’s University.

Defenseman James Byck got the comeback started on the power play at 14:27 of the third with a hard, rising shot from the point that beat the Gaels goalie Matt Kenny high right corner. Then, after killing off a five-minute major assessed to David Sa (he was assessed 17 minutes for various infractions), Graeme Henderson set the stage for overtime, scoring off a deflection at the side of the goal on a nice set up from Brent Spagnol.

The Rams defeated the Queen’s University Golden Gaels 3-2 in a come from behind overtime victory. Greg McMillan put home a rebound with 30 seconds left in the overtime period for the win.

“It’s amazing and a really good feeling,” said Rams forward Ryan Love, who is in his fifth and final season with the team. “If we can make it to the final four [in the playoffs], it’ll be a great way to end my career.”

The Rams have slumped since Christmas. Their only two wins after January are against Queen’s. They almost didn’t win this one.

“Things were pretty quiet in the locker room after the first period,” said Rams’ Coach Ed Kirsten. “I gave the guys a bit of a scolding. We had less of the glaring giveaways in the second period, and even less in the third, but it is something we’ll work on in practice.”

The game was an intense one for both teams.

Kirsten got into the game physically, when an errant puck hit him near the eye. The game was stopped while trainers attended to the Rams’ bloodied coach.

“I didn’t have to have any stiches, but eye was swollen, and it’s a bit black and blue. But no real damage,” Kirsten said.

“We just had a slow start. Once we realized we were capable of playing with them, things turned around for us,” Sikkema said. “We got the momentum of the game on our side, and after the [tying] goal everyone felt really good.”

The win was especially important for the Rams, because it gave them some form of control over their playoff destiny.

If the Rams win either of their next two games, they will get home ice advantage in their first-round series against Royal Military College. Unfortunately, the Rams next two games are against RMC, who beat them 7-2 on January 27, and the University of Western Ontario, the top-ranked team in the country. 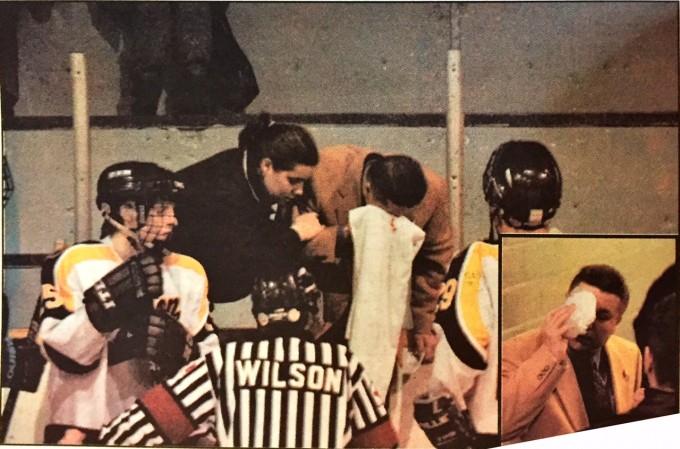 “We’re all pretty pumped,” Sikkema said. “This win helps us to build momentum before the playoffs. You don’t want to go in on a slump. These last games are very important. We have to get back to the way we were playing in the first half.”

Kirsten brought Ryerson back to the playoff picture in only his second season coaching the Rams.

“We know we were going to make it,” said team captain Ryan Love, who had two assists in the game. “There wasn’t any pressure in this game. We just went out and had some fun.”

The Rams, who finished last in their division last year, were completing with the University of Toronto Varsity Blues for first until a poor run after Christmas dulled any hopes of winning the division.

Sikkema said he was not certain of the reason for the Rams sub-par second half showing.

“Maybe it was complacency,” said the goalie, in his first year with the Rams. “After the break, we realized we were guaranteed a playoff spot. Offensively, we’ve continued from where we were, but defensively, we’ve had to battle.”

Kirsten believes his team may have been more of a victim of personnel losses.

“When you lose three defencemen, you’re going to struggle,” he said.

Since the beginning of the season, the Rams lost three players to graduation and academic problems, and defenceman Matt Robinson broke his ankle. Kirsten said the rehabilitation of the ankle has not gone smoothly, and Robinson will be out for six to eight weeks. He will be unavailable for the playoffs.

The Rams next game is Thursday at home against Western at 7:30 p.m., followed by what could be huge game for home ice advantage Sunday at 3 p.m. against RMC. The best of three divisional playoff against RMC will begin on February 19.