If anyone offers you turtle soup in the next few days, be careful. A staff member reported that one of her three turtles had been taken from her aquarium in the Podium building last Tuesday.

Some students were found walking on top of cars on Bond Street at 1.45 a.m. last Thursday, and they didn’t even bother to make sure their shoes were clean beforehand. Footprints were removed but no real damage was done. Two of the five people caught had been in a fight on campus 20 minutes earlier. Their parents must be proud.

We’re not sure what sort of weekend a thief had planned after bottles of hot sauce, Tabasco sauce and a box of plastic gloves were stolen overnight on Friday from Maggie’s Cafeteria in the ILLC.

Security recognized a man who had been known to urinate on the Podium balcony. Apparently compliant and apologetic when confronted on Sunday, he was escorted off campus before any more damage could be done.

Ryerson security was called to the engineering building for a very serious emergency. A student was balancing on a 2×4 on top of a wooden spool. 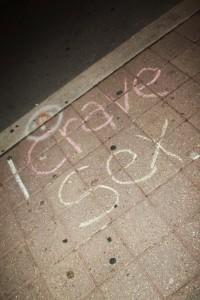 This sidewalk chalk message from Campus For Christ was scrawled across Gould Street this week as an advertisement for their coffee house meetings. If this doesn’t bring people in the door, we’re not sure what will. Frankly, we’re just disappointed that the artist forgot to leave their phone number.

Zakaria Amara, 25, is appealing his life sentence on the basis that he was young at the time he planned to detonate truck bombs with the infamous Toronto 18. Amara pleaded guilty to knowingly participating in a terrorist group and intending to cause an explosion for the benefit of a terrorist group. He may spend the rest of his life in jail unless he is granted parole. His lawyer claims that Amara should have received 18 to 20 years instead of the maximum punishment.