Ryerson's harassment office recommended in 1991 that a "media watch tribunal" be set up to oversee the Eyeopener's content. We responded with a hearty "Fuck You" on the cover. PHOTO: EMMA PRESTWICH
Reading Time: 3 minutes 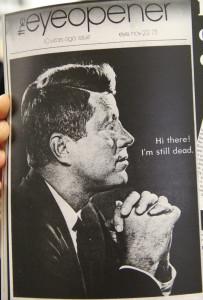 1. In the 1973, the cover featured a photo of John F. Kennedy Jr., with the tagline, “Hi there! I’m still dead.” The image caused an uproar. One letter writer complained the cover was in “extremely poor taste considering the importance of the position which he held and the circumstances of his death.” 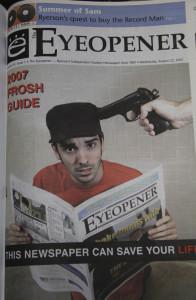 2. In the fall of 2007, the Eyeopener ran a frosh issue cover featuring then-News Editor Jesse McLean reading an issue of the Eyeopener as someone held a gun to his head. The cover line was “This newspaper will save your life”, according to John Mather, the editor-in-chief at the time. “[It was] nothing too outrageous, on the surface, but it was the August after the Virginia Tech shooting. So we took a lot of heat for it,” he said. 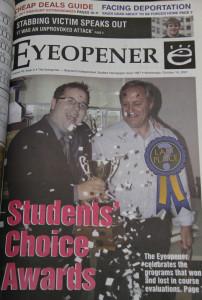 3. Also in 2007, during John Mather’s tenure as editor, the school published the results of student in-class surveys for the first time. The Eyeopener decided to visit the head of each department with the lowest survey ratings. “I dressed up in a suit and handed them a trophy for having the worst professors in the school, while another editor showered them in confetti. We ended up putting a photo of the head of the Urban Planning school on the cover. A few weeks later, I saw him at a school event, where he publicly called me an asshole,” said Mather. 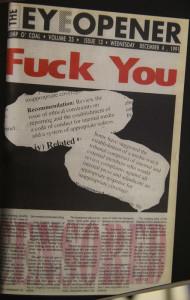 4. In 1991, the second what would be now three of the Eyeopener’s covers featuring the f-word surfaced when the school’s harassment office recommended in its annual report that a “media watch tribunal” should be set up to review “inappropriate coverage” and deal with complaints about our paper, and the office should develop a student media code of conduct. Then-EIC Mike O’Connor reacted by splashing “Fuck You” all over the cover. “Jean Golden, director of campus safety and security, who wrote the report said the tribunal and code were ‘merely suggestions’,” he wrote in the Eyeopener’s archive book. “You don’t ‘merely’ suggest censoring the newspapers. You don’t ‘merely’ suggest turning freedom of the press over to administrative hacks.”

5. Readers of the Love & Sex issue in 1995 were greeted by two photos of a naked woman pulling down a man’s pants, with the tagline, “Making Whoopie.” Many readers were offended and disgusted by the cover, mostly because of the penis.