On April 3, the largest student-run fashion production on the planet will again take place at the Mattamy Athletic Centre, continuing a 26-year-old tradition of industry-standard design and hard work.

One of the most anticipated nights of a fashion student’s university career, Mass Exodus draws industry professionals, students and fashion aficionados to the runway shows and exhibit, which together make up the production as we know it.

The runway offers fashion design students a chance for their pieces to be seen by potential employers and clients. The exhibit displays all capstone projects produced by fashion communication and fashion design students. Their final theses often incorporate various types of media, including photography, visual elements, illustration and graphic design.

Presented by the school of fashion, the show is entirely student produced and includes expertise from a variety of faculties within Ryerson including theatre and radio and television arts.

For this year’s production, we’ve brought together two separate previews on the runway and the exhibit, as well as a series of student profiles, photo galleries and videos in a celebration of students’ hard work and dedication.

Mass Exodus will take April 3 at the Mattamy Athletic Centre. The runway shows will take place at 12:30 p.m. and 6 p.m. and the exhibit will be open to the public.

Preview: The Runway
By Mikaila Kukurudza

In the days leading up to this year’s Mass Exodus, students are putting the final touches on their collections to get them runway-ready.

“What you see on the runway is strictly the vision of the designer,” said Henry Navarro, a school of fashion professor and key member of the Mass Exodus 2014 production team.

The student-run production is becoming more and more popular, Navarro said. This year, the Mass Exodus production team had to readjust the structure of both the stage and the seating after selling 25 per cent over the expected number of tickets within the first two weeks.

Mass Exodus hosts two runway shows. The first will be held at 12:30 p.m. and runs just under two hours. Vice president and buying director of The Room at Hudson’s Bay will choose the best pieces from the first show to appear again on the runway in the curated how, held at 6 p.m.

“Fashion is a very competitive industry,” said Navarro. “We want to give our students a realistic opportunity. We try to mimic in our program what happens in real life.”

Before student designers’ collections are confirmed to be in either show, students must have their designs approved by a panel of professors and industry representatives.

“The idea is that the curator is making his or her selection based on the industry standards,” said Navarro.   “It is no longer on what the school of fashion is saying, it’s about what the industry is saying.”

Unlike other university fashion programs that hire companies to produce their final shows, Ryerson’s school of fashion uses the fourth-year student showcase as an opportunity to give third-year fashion communication students an experience that mimics the realities of their chosen field.

Ryerson’s School of Fahshion has three guiding principles — diversity, heritage and innovation. Last year, with the move to the MAC, Mass Exodus highlighted heritage and diversity. This year, the show is concentrating on innovation.

“There’s always the hope that industry people from the 6 p.m. show will pick up your collection,” said fourth-year fashion design student Alannah Lindberg, who has been working on designing her collection since September.

The production of the Runway portion of Mass Exodus utilizes the skills of Ryerson students by collaborating with multiple departments including Radio and Television Arts and the Ryerson Theatre School. It also provides future Ryerson students with a taste of their future in the programs. This year, 700 high school students are expected to attend, said Navarro.

“Very often we discover that students that apply for our program have attended Mass Exodus,” he said. “This is their first contact with the School of Fashion.”

Mass Exodus brings on bittersweet emotions for fourth-year graduates, as this is their last production in the program.

“We’ve had a lot of prep, but it’s still going ot be high-stress,” said Lindberg. “This is basically what we’ve worked on for the last four years.”

Preview: the exhibit
By Alex Heck

This year’s Mass Exodus exhibit will be a showcase of thesis work from Ryerson’s fourth-year fashion design and fashion communication students. Each student’s work in the show is their final assignment before graduation. The exhibit allows students to showcase their talent and what they’ve been working on since September.

Knox Adams, a fourth-year fashion communication student who is presenting his capstone project at the exhibit, has prepared an online make-over web series. The project concentrates on how clothing and makeup shape the perception of people.

“I focused on size, age, gender, environment and race,” he said. Thursday is the first time audiences will get to see Adams’ videos.

The exhibit, which is viewable from the entrance to the runway, is an opportunity for industry professionals to see the upcoming talent coming out of the school of fashion.

“It gets the students’ names out there,” said Adams.

This year, many students have chosen video as their medium. As a result, the production team is introducing a screening room to the exhibit. With 30 seats, students’ projects will be shown in the screening room at scheduled times.

Mass Exodus 2014 will also see the introduction of a mobile app. The app will give audiences a comprehensive guide to all the presentations and profiles of the students. The profile includes information about the student, their work and their social media information, making connecting with favourite exhibitors simple.

The exhibit will be open to the public on April 3. 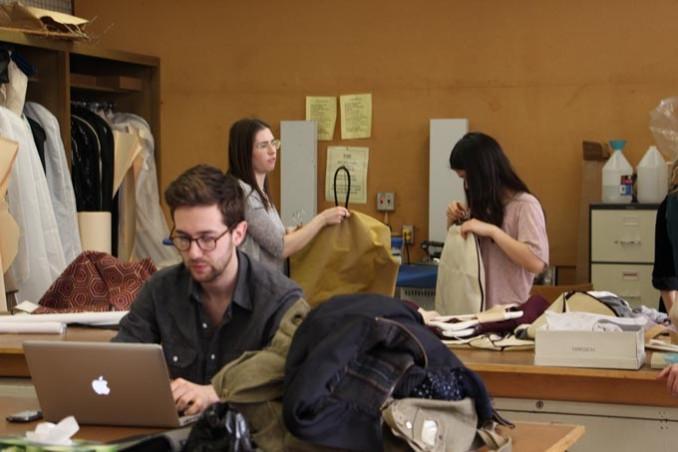