With Nipissing forward Jean Michel Paulin five yards outside of his crease, Maraldo robbed him of what easily could have been the lead, jumping onto the loose ball and giving the hundred or so Ryerson supporters something to cheer about.

The Rams went onto win 1-0, in a game where they didn’t blow their opponents out of the water, but simply did enough to get the victory.

“It was good, after a long pre season, it was good to come out and finally pop the season off, get that first win of the season,” Maraldo said. 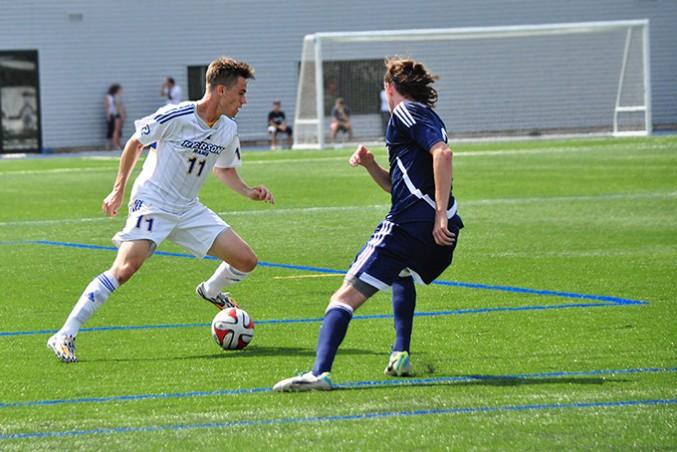 “I thought as a team that’s very new, with a large combination of first year players, they held their own. It wasn’t pretty, but I guess as the old cliché goes, it was ugly, but they all count the same,” associate coach Filip Prostran said.

The game was going back and forth until the 25-minute mark, when Viktor Anastasov teed off on a corner kick that found its way onto the head of Marko Miketic to give Ryerson the only goal of the game.

Maraldo remained steady, saving all three shots on goal, while also rising above the crowd several times grabbing crosses going through the box.

In the first half, third year forward Luka Lee was the catalyst of some solid rushes as Ryerson got comfortable and in control of the game.

The second half started off similarly to how the game began. With Maraldo magic, ensuring the clean sheet was kept intact.

Darius Tignanelli took a shot from 10 yards outside the box, which dipped from above the net down, with the ball poised to float into the top left corner.

But there was Maraldo closing the door, just getting his hands on the ball and deflecting it above the cross bar.

With the Rams almost in the clear and with only a minute to go, plus additional time, another Tignanelli shot almost tied the score up, but the ball rung off the crossbar.

And just like that, Ryerson won their first game of the season.

“It was looking positive, all of the pieces looked right, it came together today,” Maraldo said.

Prostran said that building up more chemistry will be a necessity but that patience is also necessary, considering that seven Ryerson players were taking part in their first OUA game.

“The team cohesion last year was through the roof, it takes them going on road trips together, living together, meeting together, it takes them being together when their girlfriend breaks up with them, going to class together,” Prostran said. “That and the leadership from the senior players go far in building the cohesion that we’re trying to build.”

Prostran said that the win is nice but that Saturday’s play should tell the team that they’ve got a long ways to go.

“First OUA win in a first outing, I’m happy for them. But by no means is this some amazing accomplishment,” he said

Maraldo said that rest and hydration will be a key for the Rams, who played Saturday’s game in the 30 degree heat, with the sun beaming down on the AstroTurf pitch, which has no shade.

“Recovery, I think a lot of the guys are bumped and bruised, including myself,” he said. “So as long as we play the same way, I don’t think we’ll have a problem.”

The Rams will be at home again Sunday afternoon when they take on Laurentian at 2:30 p.m.