Projected tuition increases from a report by the Canadian Centre for Policy Alternatives.

National tuition fees are expected to increase by a total of 13 per cent over the next four years, according to a new report by the Canadian Centre for Policy Alternatives (CCPA).

The CCPA, an independent research group, projects that fees will rise to a nation-wide average of $7,755 by the 2017-18 school year. Students in Ontario will continue to pay the highest tuition fees in the country at an average of $9,483, a 12 per cent jump from the current provincial average.

“Everyone here knows how much we all depend on OSAP, I don’t know why they would raise tuition,” said first-year journalism student Alexis Kuskuics.

The provincial Liberal government introduced a tuition cap in 2013, which lowered the maximum possible tuition increase to three per cent per year from five per cent for undergraduate programs.

It also added a five per cent tuition fee increase limit on graduate and professional programs.

“Right now the government has the policy established for four years so I don’t think the government is going to change their policy,” said Levy. “The maximum [tuition] can go up is three per cent each of those two [remaining] years.” Last year, however, the tuition fees in Ontario for undergrad programs went up by four per cent, according to the CCPA report.

Jesse Root, vice-president education for the Ryerson Students’ Union, said he believes that despite the projected increase, everything comes down to priorities for the university.

“[The increases are] something we already know because [they] already fall within the Liberal framework. Ultimately it comes down to underfunding of the institution,” Root said.

Fees in Ontario have quadrupled over the past 20 years while public funding for university operating revenue fell to 55 per cent in 2011 from 79 per cent in 1993, according to the CCPA. 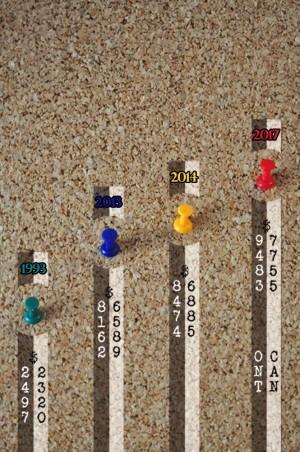 Ryerson receives just over 30 per cent of its operating revenue from provincial grants, the lowest among all Ontario universities, according to the Ontario Undergraduate Student Alliance.

The rise in fees is also attributed to smaller ancillary costs, like athletic and deferral fees, that students are charged on top of tuition costs. Alberta universities top the list, with students projected to pay around $1,025 per year in additional costs. Ontario students are expected to pay $1,010 in similar fees by the 2017-18 school year.

Erica Shaker, director of the CCPA, told The Financial Post that the cost of getting a degree is an “enormous financial stress” for students and families.

“All the evidence both in Canada and the U.S. does indicate that financial stressors on students are even more pronounced than stressing about academic performance,” Shaker said.