Two Eyeopener writers infiltrated Pitman Hall for the purpose of journalism and had a pretty average night. There were no fights. No one railed coke off the kitchen counter. No holes were punched in walls and no one passed out. It was just a whole lot of dancing and confusion. This is an account of their perfectly mediocre night at Pitman. By Emma Cosgrove and Salmaan Farooqui

The common room door opens like a floodgate, releasing a wave of deep bass and the stench of crappy cologne. Lights are low.

Every surface is covered in bottles and cans. The kitchenette in the corner is a mess. Chairs and people are scattered around.

Some of them squeal in greeting upon our entry (the people, not the chairs).

Thankfully, none of the 15 people in here are squealing at me. I do some quick mental math to determine the total dollar value of the alcohol in the room, coming up with at least $400. These kids don’t fuck with cheap beer. I see bottles of Kraken, Jägermeister, Grey Goose.

They have the grandiose taste of a 45-year-old corporate lawyer. Rest assured, folks — OSAP money is buying quality liquor.

“It’s like electronic music, but with rap over it,” someone explains to me.

The names Chief Keef and Waka Flocka Flame are tossed around.

The female-to-male ratio here is significantly skewed – for every girl there are at least 3.5 dudes. Two guys sit on the couch, wearing sober expressions. They bob their heads absentmindedly.

Neither are drinking nor talking.

A guy in a bright red shirt bounds around the room, dancing furiously and ricocheting between huddles of people. He introduces himself. “You look like a Holly!” He tries to guess my name, going off the first letter. He spews out two guesses. (“That’s all the E names I know!”) He’s visiting from Brock and is visibly wasted.

He springs away, dancing and mouthing Kanye West lyrics.

A girl pleasantly tells me to stop leaning against the fridge because it might tip over and squash the couple making out next to it.

What a way to die.

The word magnets on the fridge spell out “always give gorgeous blonde super bed.” I am mildly surprised, but what was I expecting, haikus? A political manifesto? Someone prances around with an LCBO bag on his head and a round face cut-out like Finn from 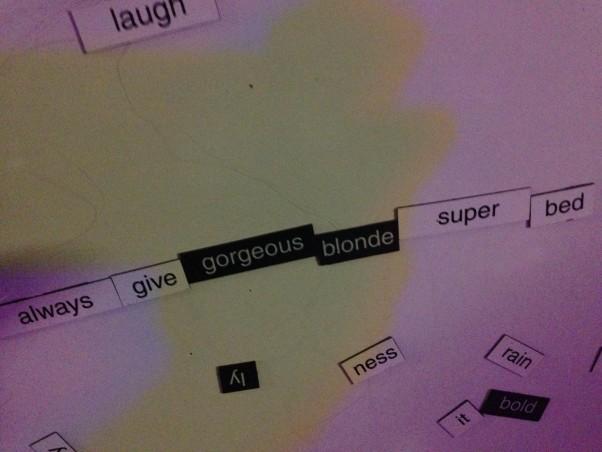 Adventure Time. He, too, dances.

I ask someone what the dance move, which incorporates a fair bit of elbow jabbing, is called. We settle on “cooking.” These people cook up a storm. They cook on the couch and the floor and sitting in chairs and while conversing and by the stove. It’s like Hell’s Kitchen in here.

A game of beer pong commences.

Utilizing the limited resources, a gaggle of boys align two round tables of different sizes and set up cups. I wonder about the competitive advantages of the disproportionate tables. The guys don’t seem concerned — they’re too busy saying words like “whoop” and “swag.” A guy and a girl stand in a secluded doorway. He tries to kiss her. “You’re drunk,” she mouths.

He bows his head in frustration and walks away.

I ask her about it. “That’s my best friend,” she says.

“In terms of party situations, teenage hormones are at their most infinite.” We’ll call her Alice. She is very wise.

“In terms of party situations, teenage hormones are at their most infinite.”

The party is still feeble, and nearly everyone present is extremely intoxicated.

Three people are lined up in a row, doing wall sits. They’re waving their arms in the air, one girl holding a bottle of Jäger.

The three of them robustly chant “bitches love sosa.” A girl asks Wasted Brock Guy if he wants to take a shot. A collective “NO” escapes from the mouths of everyone in the room.

Someone brings him a mug of water.

Next to him, a guy is giving a foot rub to a girl. A spontaneous game of limbo ensues. People eat chips.

Meanwhile, my fixer Salmaan Farooqui is having a hell of a time at another party.

One of the odd things about parties at Pitman is how little time is actually spent partying.

At least half of the night consists of groups of people traversing Pitman Hall’s 14 floors as if it were a maze. If anything, most of the drunken encounters and insane events happen in the craze of the halls and elevators.

At 10 p.m., a friend and I head to the elevator after hearing many intoxicated people shout about a party below. There’s a mass exodus as almost the entire party on our floor leaves to see what all the buzz is about. This is partly thanks to some guy who excitedly tells us, “Dude. (It’s) filled with entirely. Hot. Girls.”

The moment the elevator doors open on party night is always exciting. You never know what you’re going to see inside the little cube. That night we’d seen the door open to reveal puke, a couple savagely making out with each other and this time, a group of 10 testosterone-filled male engineering students yelling about a party.

Seems like they heard about the girls-only party too.

The magic doors open and we find out that what our guy neglected to mention was that the party wasn’t in a room. It was just a congregation of 20 to 30 hammered kids standing around the elevator. At least they didn’t lie about the all-girls thing.

One exceptionally intoxicated girl starts yelling at people to kiss her. My friend, in a moment of bad judgement, decides to go for it. What he doesn’t expect is a chain reaction of jumpy guys in the elevator. One by one, she starts macking on every single one. It isn’t pretty. They hit walls, almost fall over and bump into other people.

People stare for the first one or two guys, but eventually they awkwardly carry on with conversation while Kiss-Me Girl continues through a line of guys.

Eventually, she stops. But one last engineering kid stomps into the middle of the group, spreads his arms out in protest and yells, “You made out with all of my friends, but didn’t even make out with me?” The entire room (or… hall I guess) falls silent. For a moment I wonder if the entire group will burst out laughing at what can only be described as an act of desperation.

“You made out with all of my friends, but didn’t even make out with me?”

But then Kiss-Me Girl lunges at him with the same intensity as she did with the last handful of guys. The entire hall cringes collectively.

She tries to double back to the first guy she kissed. He isn’t into it.

With that, me and my friend decide to leave the madness and regroup at my room.

He texts me the next morning.

“She kissed more people in five minutes than I have in my entire life…” he says. “I don’t usually regret drunk things, but that I regret.” And if you were wondering, no, I didn’t kiss her.

The door opens and someone crawls into the room on his hands and knees. Groups of guys intermittently flow in, stay for several minutes, and leave.

“Last year was way better than this year,” says a second-year business student. She shows me a video on her phone of a Pitman party, telling me the secret is lights and a DJ.

“Everyone’s just kind of finding out what works, getting to know each other. Our first big party [last year] was Halloween,” she says.

I realize someone has stolen my last beer so she offers me one. It’s Bud Light Platinum. I accept, inwardly baffled at the phenomenon of a beer that is simultaneously “strong” and “light.” 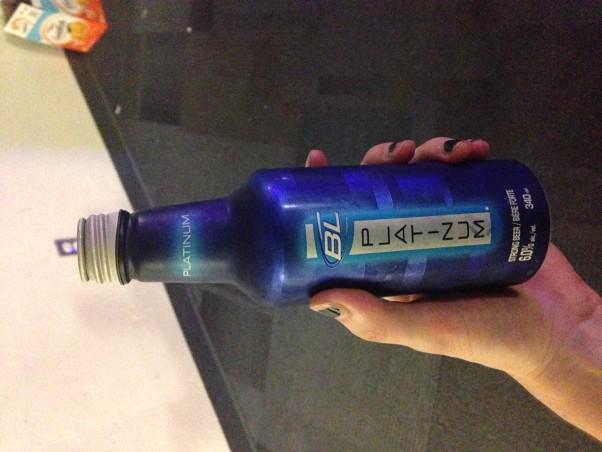 A guy we’ll call Nick, a student from Metalworks in Mississauga, has been building houses of cards for the last hour. “It’s my first party in four months and I’m fucking hammered,” he says. I ask him about his tattoo — written on his inner forearm — that says, “Change the game, don’t let the game change you.” He tells me it’s a Macklemore quote.

A mass of people – girls and boys – has entered and for several minutes the room is so filled to the brim that it feels like a party is beginning to occur.

The pair continues to make out violently next to the fridge. Their PDA level has surpassed PG and is hurtling toward R.

Someone plops down on the couch next to me. He shows me his bloodied knuckles from punching a wall. “Everyone’s messed up, I love it. It’s so good,” he says. I ask him if he’s a party animal. “No, but I don’t turn down,” he says.

I tell him I’m going to quote him.

He says, “Can you quote this?” and lunges for my cheek. “Nope, probably not,” I say, effectively dodging his face.

He tells me he’s going to “turn down soon'” and walks away.

About as fast as they entered, nearly everyone has cleared out. “Where did they all go?” someone says, exasperated.

“To a better party that we don’t know about,” someone replies, heading for the door.

I realize at once that this whole night is a sequence of seeking out where the party is happening, to the point where people scatter themselves around. I wonder if they might consider the strategy that lost people use — stay where you are and surely someone will come and find you.

I follow some people out into the hallway. It’s like walking into a zoo with animal sounds bouncing around the confined space.

“Why are you so pully? I have a bubble, get out of it,” one girl snaps at another.

“Party’s bumping tonight!” I ask Alice why everyone has amalgamated out here in this narrow corridor.

No one is off-limits for drunken embraces.

A few of us end up back in the deserted room. I use this moment of tranquility to reflect on the cumulative events of the night and begin to realize that within the confines of residence is a climate of pandemonium.

But most of all, the zealous youth of Pitman Hall are in search of “the party.” The elusive “party” holds promises of fun and perhaps even someone to swap saliva with.

In the pursuit of “the party” they toil for hours upon hours with no avail, exhausting their sleep-deprived, caffeinated and liquored-up bodies.

Will they ever really find it? Does “the party” even exist?

Thanks to Jake Kivanc for his work as a fixer and his help infiltrating Pitman. 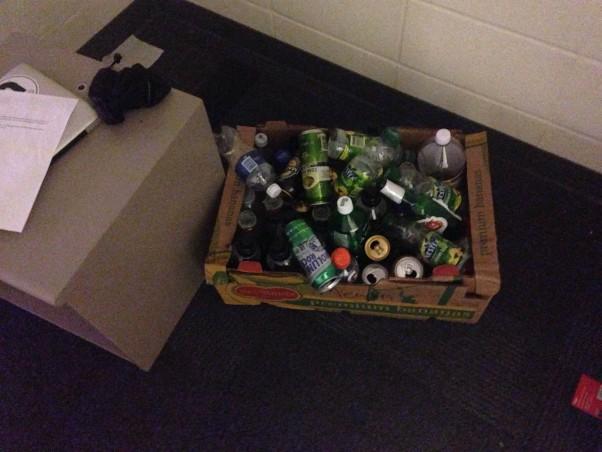