Most kids grew up with a favourite stuffed animal. But if you’re Christopher Robin, your teddy bear is also one of the world’s most beloved children’s character. But a lot happened before Winnie was hanging out with Tigger in the Hundred Acre Wood. Check out a unique piece of Canadian history at Ryerson’s Image Centre — Remembering the Real Winnie: The World’s Most Famous Bear Turns 100 — and learn the story of the real bear that lent her name to AA Milne’s Winnie the Pooh.

Before becoming a childhood fixture, Winnie was the pet bear of Canadian soldier Harry Colebourn. Unknown to Colebourn, the story of him and Winnie would become an important contribution to children’s literature and popular culture. This exhibit addresses that history and will include not only photographs but original artifacts never before seen by the public like diaries, letters, newspaper clipping and even a full veterinary kit — all of which are from the Colbourn Family Archive.

The exhibit focuses on the role of photography within the Colbourn collection and positions photographs alongside artifacts in an attempt to illustrate the reality of war through Colebourn’s experience. Curator Irene Gammel said the exhibit also bridges the significance of the fictional story and fact. 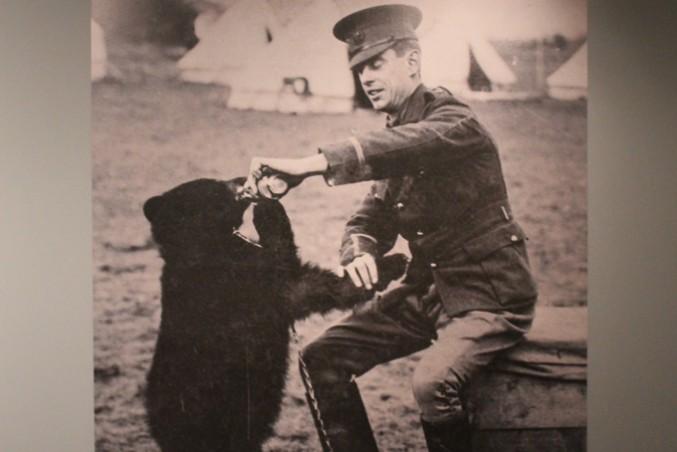 “The exhibition elaborates on the role of a war mascot, exploring also the tension between the real story of hardship and war on one hand and the fiction with its evocations of a safe space on the other,” she said.

Against the backdrop of WWI, the story of Colebourn and Winnie illustrates the need for friendship (however unlikely) in times of trauma.

At the onset of WWI, Colebourn bought the female black bear cub from a hunter in White River, Ontario and named her after Winnipeg where he’d lived after immigrating to Canada. During the war, Colebourn served with the Royal Canadian Army Veterinary Corps and brought Winnie with him to England where she would become unofficially recognized as the mascot of the Fort Garry Horse where Colebourn served as a veterinarian. When his regiment was called to the front in France he placed Winnie in the London Zoo for her safety — the bear became a favourite attraction for London natives for her playful and friendly nature.

Among those fans were AA Milne and his son Christopher Robin Milne who would go on to name his teddy bear after Winnie. Milne’s Winnie the Pooh stories were adapted by Disney and the rest is history.

For those looking for more information, or who can’t physically make it to the RIC, the exhibit is coupled with an interactive website that contains the complete contents of the collection. Viewers can look through diaries, explore maps and observe artifacts including 3D scans. Winnie’s history is told in-depth through audio, motion graphics, videos and photos on the site co-created by Ryerson students, faculty and alumni. The site will be launched in Fall 2014.

Remembering the Real Winnie is open from 5 November till 7 December in the Student Gallery at the RIC.