Pro-Ryerson group Rise for Ryerson and the Ryerson Students’ Union (RSU) both held separate rallies with opposite messages on campus shortly before the board of governors (BoG) meeting on Nov. 24.

Both sides waited to be let in the meeting while crammed on the 14th floor of Jorgenson Hall.

Rise For Ryerson, formed this past Friday, included executive members from the Ryerson Communications and Design Society (RCDS) and the Ryerson Commerce Society (RCS). Their rally was held at the Ted Rogers School of Management at 3 p.m. before marching to the library building. 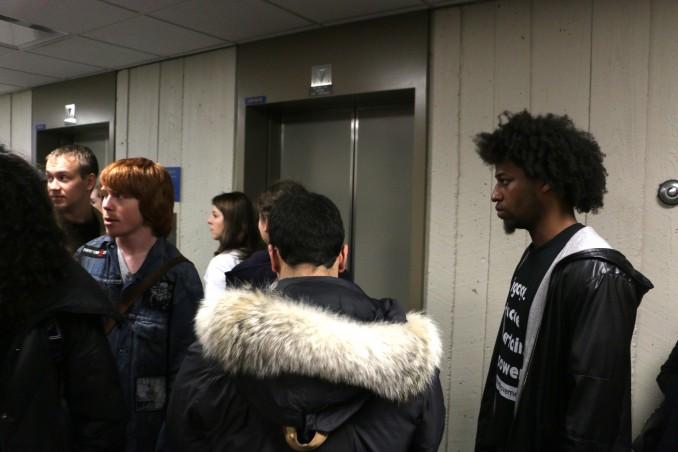 More students joined the group there and about 80 members walked to Jorgenson, gathering in a room outside of the boardroom with the intention to sit in on the BoG meeting later in the evening.

The RSU held its own rally in front of Jorgenson at 4:30 p.m. The rally was a culmination of Tent City, a part of the RSU’s Freeze the Fees Campaign, where members said they would sleep in tents outside of Jorgenson until they could speak to the BoG. The roughly 100 attendees then went inside to attend the BoG meeting.

The meeting started at 5 p.m. but was not immediately open to non-board members.

Upon arriving on the 14th floor, RSU supporters waited in front of the boardroom doors, prompting most Rise For Ryerson members to join them. Roughly 200 people total filled the space up to the elevators and down a hallway to the right of the boardroom.

Tensions developed between the groups as they waited. The Eyeopener reporters witnessed several heated debates between members of each group and there were allegations of racist comments. The RSU sporadically chanted slogans like, “The students united will never be defeated,” while Rise For Ryerson members tried to shush them.

When Rise for Ryerson members tried to begin their own chant, they were booed by RSU supporters. There were also allegations that several University of Toronto students were in attendance in support for the RSU.

Both sides were allowed to enter the boardroom around 5:30 p.m. After seating space ran out, people stood against the wall until standing room also ran out, leaving some students standing in the doorway and outside.

RSU President Rajean Hoilett addressed the board members first and called on them to support more accessible education by creating an alternate budget that would freeze tuition fees without cutting student services.

A representative for Rise for Ryerson spoke immediately after, saying that the group supported the decisions of Ryerson administration and that tuition increases are necessary to maintain quality of education and the school’s growth. An RSU supporter began to heckle him but was quickly silenced by others in the crowd.

Both groups claimed to have the support of Ryerson students behind them.

A woman who identified herself as a Women and Trans Centre employee as well as a CESAR student also spoke in support of the RSU’s message.

Ryerson President Sheldon Levy briefly addressed both groups and said it was important for everyone to come together and find a solution. He also said he could not promise to freeze tuition fees because it would be financially implausible for the school.

RSU and Rise for Ryerson representatives both thanked the BoG for listening and the majority of both groups then left the room.

Outside, the RSU began dismantling its Tent City.