The Ryerson Rams lost more than just a hockey game against the Nipissing Lakers on Friday night.

In a chippy 6-3 win for the Lakers, the Rams lost their captain Jessica Hartwick to a possible broken arm.

Hartwick was hit in the wrist by Nipissing’s Brooklyn Irwin, who received a penalty for slashing.

The game started off very poorly for the Rams as the Lakers set the tone with a goal early in the game at 4:47 and two more before the end of the period.

The Lakers were able to frequently crowd the net and make it difficult for Ryerson goalie Alex Armstrong to see the puck. It was 5-0 at the end of the second and Armstrong was replaced by backup Ally Sarna in the third. 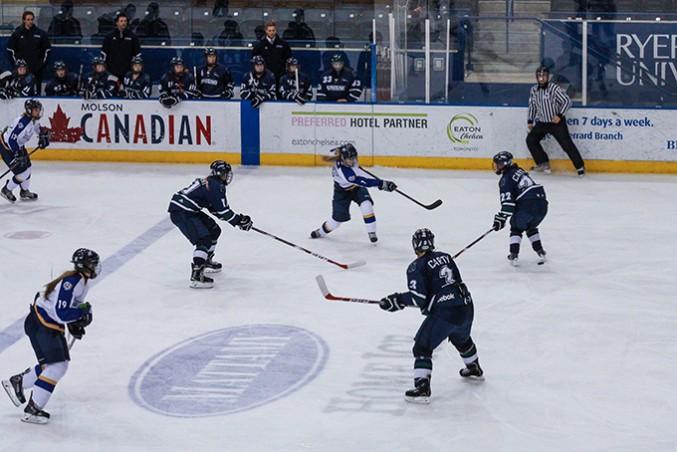 It wasn’t until the third that the Rams managed to come out aggressively and score three goals in an attempt at a comeback.

Chloe Richardson and Clare Sabine scored two goals in the early minutes of the period at 2:47 and 4:48.

Nipissing managed to score their sixth goal of the game just seconds before Sabine at 4:39.

At this point in the game, players on both teams started to play dirty and Hartwick was taken out of the game with five minutes left to play.

“It might be broken which is a huge loss for our team, Jess is our leader and one of our top players and it definitely hurts us,” said assistant captain Melissa Wronzberg.

Haley said the loss of the team’s captain should give the team a wakeup call to step up in future games.

“We need to rally around that fact that our captain is not able to help us so everybody’s got to step forward and pull their own weight,” Haley said.

With the loss Friday and a game against Laurentian on Saturday, Haley was not happy with the performance.

“They were faster and stronger, it looked like we were the team that had spent five hours on a bus, not them,” she said. “But this group has had success because they believe in themselves, and I certainly believe in them, and I think you’ll see a different team tomorrow.”