It’s Thursday. Throw on something hot, something tight. Douse yourself in Axe body spray and take a pre-game shot. You’re going to Gracie’s because you want to drink and fuck.

Forget the cab, you’re thrifty — broke ass college kids ride the train, and you’re about to spend more than you have on tequila and light beer. Get off at St. Andrew station, walk one block north and two west, pushing against the February cold to join the line-up of hopefuls drifting in at 10 p.m.

You can’t see the bouncer’s face for his black hood and ski mask, but it sounds like his name is Donny and he really doesn’t care if you’re cold. You’re going to wait in single file like school children, longing for the moment when you can get bombed and show everyone that you know the words to ‘shake it off.’

The line shivers and stumbles towards the door, you flash your Ryerson ID to skip the cover and give a nod to the man who stamps your wrist.

Congratulations, you did it, you have joined the hundreds of Ryerson students who flock to Grace O’Malley’s to club for cheap on Thursday nights. With just your OneCard, the hefty $10 fee at the door is docked — the result is the Ryerson Gracie’s phenomenon.

You’ve never been here before, you don’t know what to expect and the decor isn’t helping. There are framed Jerseys on the wall beside back-lit panels of faux-stained glass and a ceramic tree sprouting from the bar. You get it, it’s an Irish pub mixed with a dance club, but it looks like a Kelsey’s in middle earth. Whatever.

You join the crowd around the bar, shaking a fist full of change and yelling ‘bud-light’ like you’re trying to place a bet. The country band on stage announces their last song, you don’t know what it is but you’re going to yell in someone’s ear that you love it. You find a table, something on the wall as the band walks off and the DJ cuts from Under Pressure to Ice Ice Baby like it’s never been done before.

Stand and drink, sipping slowly, scanning. You make eye contact with potential suitors, grinding the air suggestively at nothing and no one in particular.

The mix picks up and you absolutely lose your shit to the first eight bars of remix to ignition, but you give up mouthing the second verse when you see a man with shorn hair roll in with a gang of average sweet bro dudes. They’re stoked and amped to party; you watch in awe as the shorn man robots to the coat-check line. 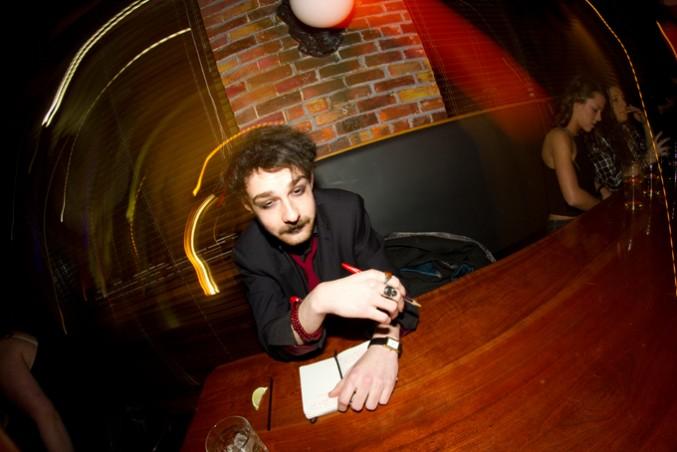 You’re not drinking for fun or release now, you’re drinking to drown out the loud bachelorette-esque party of women banging the top of your table. They’re cackling, screaming about the next band or some other drunken bullshit.

Out of the corner of your eye you glimpse the night’s first instance of ruckus — two strangers, getting ever closer as they almost shove each other. But not quite, not yet. One, wearing a black hoodie, is clearly too drunk to realize how much of a problem he is. You can’t help but think that everyone should just love each other. Seriously.

Further down the wall of booths is the epicenter, a man sitting at a table, surrounded by a crew and clutching his girl like a mafia don. He seems innocent, you have no idea what this man has said or done but he’s unflinching as the black sweat-shirted man moves to yell in his face.

You glance back at the cackling women and skinhead robot-man is there, hitting on the tallest, managing both restraint and forward grace as he totally gets shot down.

You look back at the mafia-table and a second challenger has approached the don, seemingly yelling about something unrelated and grabbing at his shirt before being pulled back into the crowd. It ends with a look from security, the don of Graces sitting stoically despite two people trying to punch him in the past ten minutes.

At the stroke of midnight you see someone try to get on a table, the thin arteries between booths are clogging with the fashionably late and you’re too drunk to love tonight. Join the coat-check line to spend your final moments describing a black coat because someone dropped your ticket in a pitcher. Fuck everything, hail a cab and go home.