Carleton came out flying, shooting 11-17 from the field in the opening quarter, led by the efficient guard play of brothers Philip and Thomas Scrubb. Carleton played near perfect perimeter defense that forced Saskatchewan to settle for contested shots in the paint or three pointers as the shot clock trickled down. The successful quarter for Carleton was topped off with a buzzer beating three from Philip Scrubb. Combine the brilliant play of the Scrubb brothers with Saskatchewan’s poor offensive showing and the result of the first quarter was a 28-10 lead for the Ravens.

The second quarter cemented that this is a Philip Scrubb world and everyone else is just living in it. After shooting 3-3 from behind the arc in the first quarter, he connected three more times on five attempts in the second. By the end of the half,  Scrubb had registered 29 points on 10-15 shooting.

“I just felt confident in my shot and I hit a lot of shots early. If you’re making them you just want to keep shooting,” said Philip Scrubb when asked to speak on his offensive dominance.

Philip Scrubb scored 11 more points than the Huskies roster could muster in the entire first half. In fact, Saskatchewan could only muster eight points in the second quarter at all. Carleton boasted a 48-18 lead over Saskatchewan as both teams headed to the locker rooms at half time.

The second half opened with a five point run by Saskatchewan, which was met by a deep field goal and back-to-back threes from Carleton fifth-year guard Victor Raso. Unfortunately for Saskatchewan the game was not a tale of two halves. While the Huskies’ shooting percentage did increase, Carleton continued the dominance it displayed in the first half.

Philip Scrubb remembers playing Saskatchewan in his rookie year, in what he says was a pretty exciting game. “They are always a tough team, especially when it comes to rebounding the ball,” said Scrubb. On this day however, it was Carleton that was able to take control on the boards outrebounding Saskatchewan 36-24. 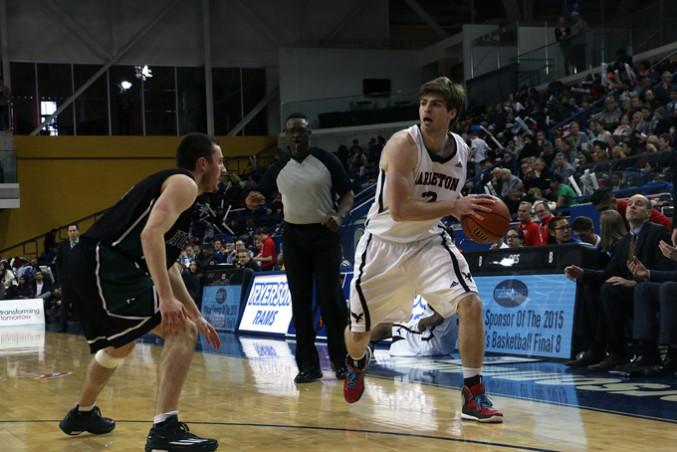 The lone bright spot for Saskatchewan was their leading scorer, forward Mathew Forbes, who netted 14 points and grabbed seven rebounds in the game. Saskatchewan fought hard but ultimately succumbed to the well-oiled machine that Carleton has manufactured. Carleton emerged the victor in a lopsided 90-50 first round game.

Thomas Scrubb also notched 18 points and pulled down nine rebounds in the victory. Though Philip Scrubb ended the game with 31 points, two rebounds and two assists in 23 minutes of work he says he is not dwelling on his performance. “In the playoffs you take it game by game, you can’t think about the last one,” he said.

Carleton coach Dave Smart says that getting the Scrubb brothers into a scoring frame of thought has been a process. “We have worked really hard at getting them chances to score and creating that mentality in them. It’s not who they are, [shoot first minded players] they want to get players involved.”

With this victory Carleton will go on to play the Victoria Vikes, where they will  continue their quest for a fifth national championship title in as many years.