By Richa Syal and Truman Kwan

The question is not whether a game is feminist or not, but rather what does the game do and how is it useful or interesting to feminist projects, said Merritt Kopas to a room of roughly 40 male and female faculty and students at the Transmedia Zone on Thursday, March 19.

Kopas, a member of the collective Dames Making Games spoke about the work women and the queer community are doing in games and challenged a progressive approach to what games should look like.

Dames Making Games in a not-for-profit organization founded in Toronto in 2012 and aims to highlight the achievements and stories of Toronto-based game makers and provide a community and venue for those who want to explore playing, critiquing and creating games.

The interactive workshop was the final series of the Hacking the Culture Speaker Series with the Ryerson Studio for Media Activism & Critical Thought.

“There’s been a huge discussion about feminist gaming and about online harassment of feminist game developers and we wanted to broaden the discussion and take it out of a victim narrative,” said Marusya Bociurkiw, director of the Studio for Media Activism & Critical Thought and associate professor of media theory at RTA school of media. 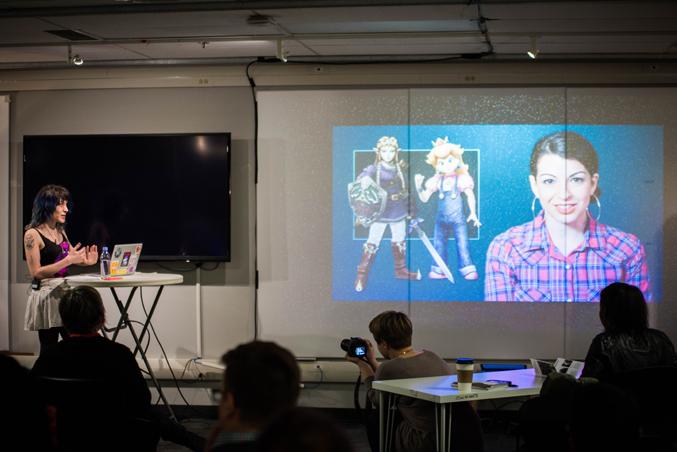 The discussion mainly sparked after the Gamergate controversy in August 2014 where female game developer, Zoe Quinn was threatened with violence and harassment since trying to publish a game which inspired outrage among gamers.

“Yes we need to talk about this stuff. Yes, it’s still happening but the work of building new things goes on in the meantime,” said Kopas.

The issue challenged how female gamers and developers are depicted in the gaming industry and Kopas addressed ideas that aid feminist projects in her discussion.

“It’s way more fruitful to ask what games could do that’s useful for feminist projects,” she said.

Games that take on a specific issue, explore marginalized subjectivities and breakdown complex social systems are among the concepts games can use that are useful to feminist projects, she said.

“I really love playing games but the female demographic is really marginalized in the gaming community which is unfortunate. It just baffles me how there is so much hatred towards women in the community,” said Amanda Barrios, a fourth-year Radio and Television Arts (RTA) student and workshop participant.

Kopas cited works such as Pornography for Beginners by Holly Gramazio which aims to showcase restrictive pornography laws in the U.K., Consentacle by Naomi Clark – a cooperative card game that represents a consensual sexual encounter between humans and aliens, and Analogue: A Hate Story by Christine Love which involves interpersonal relationships and LGBT issues through human/computer interaction.

“We need to move into what it really means and what it’s like to actually create alternative utopian spaces for feminists and queers in the gaming world,” said Bociurkiw.

The workshop included a discussion raising awareness and highlighting several feminist works that have already been developed, a workshop challenging traditional concepts in gaming, and ended with a Q & A with Kopas.

“I think online feminist resistance is really important but shared community space like Dames Making Games, where people have come together with some semblance of shared values are necessary because they allow for growth and development of challenging and complex projects,” said Kopas.

Dames Making Games in a not-for-profit organization founded in Toronto in 2012, and aims to highlight the achievements and stories of Toronto-based game makers and provide a community and venue for those who want to explore playing, critiquing and creating games.