Some Netflix users at Ryerson are becoming world travellers – or at least virtually.

The survey has a margin of error of 7.15 per cent.

Of these Netflix border-crossers, 80 per cent turn to the U.S. to access movies and TV shows that are not available in the Canadian Netflix region. 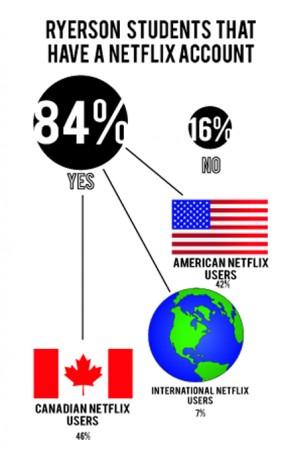 Users trick the service by changing their Domain Name Server (DNS) to appear as though their device accessing Netflix is located elsewhere geographically, when in reality they’re probably on a beanbag chair at the Student Learning Centre.

In February 2015, 5.7 terabytes went to Netflix usage on the Ryerson network, courtesy of your Friends addiction. This was following encrypted and unencrypted websites with a bandwidth of 44 terabytes and YouTube with eight terabytes of usage.

“We don’t do an analysis of usage that tracks who’s using a proxy system or a VPN or whatever to access Netflix in the U.S.,” Lesser said.

Josh Loewen is the owner of one of these proxy servers, www.get-american-netflix.com – a site that allows users to switch Netflix regions for access to movies and TV shows not available in their Netflix home region.

Netflix’s formal policy restricts users from bypassing their country detection and claims to even have technology for preventing this action, as stated in the terms of use document.

“You may view a movie or TV show through the Netflix service primarily within the country in which you have established your account … The content that may be available to watch will vary by geographic location. Netflix will use technologies to verify your geographic location.”

But Loewen thinks Netflix’s recent “crackdown” is just a scare tactic and really just comes down to business.

“I think Netflix is in a position where they need to look tough with their anti-region-switching technology to satisfy the production companies, but they can’t afford to be too tough otherwise they will lose customers in countries they don’t get support or lose them to competing video services,” Loewen said.

From a business perspective, he added, Netflix has approximately 30 million users in countries without official access to the service, who connect by changing their DNS. At $8 a month for each user, adding up to $240 million a month, it’s a “good reason to not crack down on this,” Loewen said.

Last year Netflix was the primary streaming video provider for Australians, even though Netflix wasn’t even in the country. Similarily, the Netflix-less country of China, has over 20 million Netflix users, according to GlobalWebIndex.

Avner Levin, the director of Ryerson’s privacy and cyber crime institute, said the reason why Netflix isn’t too fazed by users breaking borders is because they are the middleman between the producers of TV shows and movies.

“Netflix is the intermediary and it might be the people with the licensing agreements who might be pressuring [them] to crack down on something like that,” Levin said.

“It doesn’t really matter for Netflix so much as long as they’re getting the monthly fee. For them it would be more of a problem if someone was bypassing the fee and getting Netflix for free.”

With files from Josie Mills