“I’m inspired by the women in my life, and when I’m inspired, it makes me want to do better work,” said event organizer and Ryerson Image Arts Course Union [IMACU] president Rebeca Ortiz.

The second-annual event – organized by members of IMACU, Ryerson Alliance of Women Filmmakers [RAWF], Musicians@Ryerson [M@R], Poetic Exchange and the RSU – displayed over 35 pieces of photography, film, poetry, music and other art by women. The event’s objective was to combat adversities females face in art through disproportionate “employment and representation.”

“Women are marginalized unfortunately, so we want to bring attention to women’s issues and support them in an industry that’s not always welcoming,” said event organizer and RAWF co-president Meaghan Gable.

Since the showcase celebrated all women’s work, event organizer and RAWF co-president Sydni Lazarus said pieces were accepted regardless of whether they touched on gender issues. However, Lazarus decided to make a film shedding light on agender individuals.

“It plays with ideas of gender norms and the idea of identifying gender in general,” said Lazarus. “But some [films and pieces] are made for fun’s sake and still have awesome female characters.”

Kathyrn Lyons presented a documentary on her family and how Ontario education favoured their proficiency on standardized testing, while Emily Sylman submitted various collages of crowds pasted onto landscapes of rapids, shorelines and forests. Anita Cazzola, an event organizer and M@R’s vice-president, played light-hearted folk with her sister Liv as The Lifers. Anita said she enjoys “making music for the sake of music,” often inspired to write about local pedestrians on the sidewalk and subway.

Still, Cazzola said she’s noticed how women can be set apart in the art industry. For M@R’s recent Battle of the Bands at the Hard Rock Cafe, Anita and her sister were the only female performers.

Other pieces decided to confront women’s issues head on, such as Lucy Lu’s Untitled illustration of a woman wrapping her face and breasts with hair. Twoey Gray – a Poetic Exchange member and first-year politics student – also performed a spoken word piece on girlhood. She said she wrote the poem to combat unrealistic depictions of girlhood that perpetuate toxic relationships between women.

“A lot of movies, like Mean Girls, for example, are supposed to be coming-of-age films for girls,” said Gray. “But it’s nothing like real life. I’ve had experiences of women and girls looking out for me, so I think it’s harmful thinking of our interactions as quarreling.”

For Gray, Women In Art and similar events are important to make sure female artists are appreciated, as male works can often take the spotlight over others. Gray said it happens in her own art medium through “boy yelling,” where loud male voices win titles at poetry slams and undervalue soft spoken speakers.

Although Women In Art is meant for women, males like Poetic Exchange president Patrick Richard Garcia were eager to support the display, saying the event is “all about awareness.”

For next year, Ortiz hopes to expand the showcase and promote more artwork by women.

“If you ask someone who their favourite director is, it’s often Steven Spielberg or Quentin Tarantino. It’s heavily unlikely the first person they’ll think of is a woman, and it’s really stupid,” Ortiz said. “We want to emphasise that we make art.” 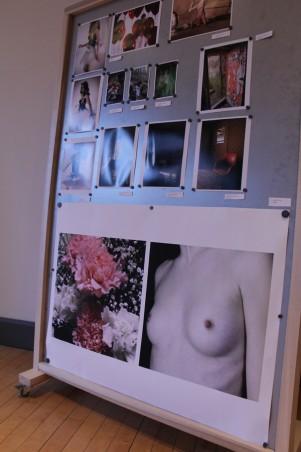