“Which party are you with?”

I’m in front of The Lockhart, the new Harry Potter-themed bar at Dundas and Dufferin streets, leaning toward the bouncer to see what’s on the screen of his iPad.

“Which party?” he asks again. I say no party, buster.

He points inside, saying I’m allowed the “standing bar spot” next to the guy with the baseball hat on. Bewilderment ensues — I haven’t been coerced into this kind of elementary school seating arrangement since my nosepicking youth, but I follow his instructions anyway with reluctance.

I Slytherin to the bar, worming my way toward Baseball Hat Guy. There is a stool in my corner of the L-shaped bar and I boldly sit my bottom down in an act of rebellion. Fuck standing.

I look around, peeling my eyes for Harry Potter-themed shit and people in costumes and I see neither. Am I in the wrong place? Does it matter? Does anything?

I’m crushed by the ridiculous lack of space. It’s not cozy, it’s an un-ironic sardine can. I count about 30 muggles in here and it’s close to max capacity. The amount of slurred words being tossed around reminds me of a first-year spell class. It’s Wingardium LeviOsa, not Wingardium LeviosA you haggard drunks.

I look around but there’s not much to see. There are few wizardly artifacts, save for the stag emblem on the wall (Harry’s Patronus, dummy), “POTIONS AND ELIXIRS” in big letters next to it (alcoholic beverages, dummy) and a neon heart around the words “All was well” (the last line of the written series, dummy). All the references are obscure as hell, or maybe I know nothing about the boy who lived. One of the owners, Paris Xerx, says he and his business partner Matt Rocks designed the space so that Harry Potter fans and non-Harry Potter fans can both have fun. 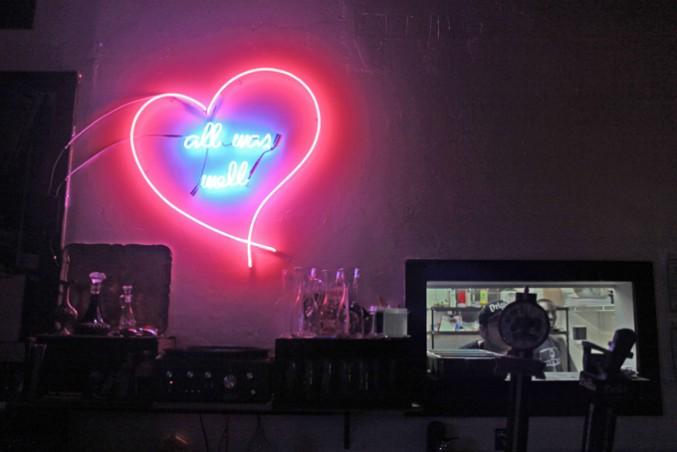 “Our goal is to be a cool community bar run by nerds,” the bartender says. Traces of nerdhood are seldom among mismatched furniture, mason jars and bad tattoos.

I order the Shacklebolt, their most popular drink. It’s made with spiced rum, house-made ginger beer, ginger ale, lime juice and ginger bitters, setting a wizard back $9 (the final cost after tax and tip is around $13). I’ve never paid that much for a drink before. My mind says no but my body says YES!

The drink apparates in front of my face in a jar with a handle, just in case things get slippery, with an unbent bendy straw. I sip, and I can’t tell if the burning sensation in my throat is rum or one of three ginger-based ingredients. 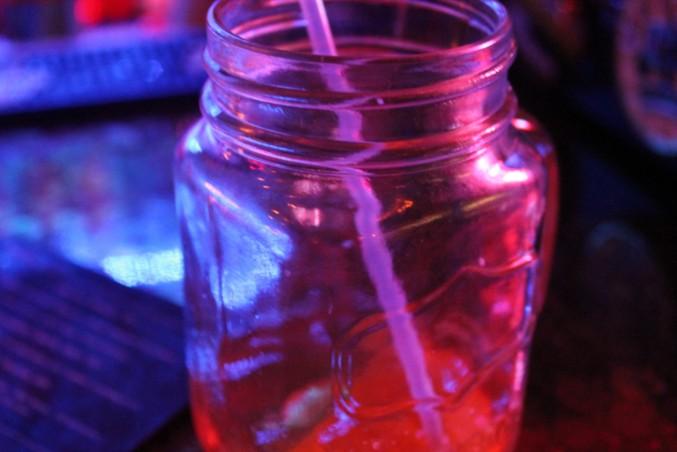 The drink is pretty good, even after the 10-minute explanation I received about how they infuse their rum with cloves and stuff in growlers they keep up on a high shelf that looks precarious as fuck. Sounds like some kind of potion.

It appears to be mostly women in here. No one is in robes, which disappoints me. I inquire; apparently in the two weeks that the bar has been open, two people have shown up in costume. One forgot their wand at the end of the night.

At exactly 9:48 p.m., Xerx points to the shelving behind the bar — rustic wood with jars nailed to the underside. Pintrest shit.

“People ask us how we keep the jars on the shelves. We tell them it’s magic,” he says to me, winking. Another One Bites the Dust fills the air and the burning in my throat intensifies. I leave, and I’m Neville coming back.

With puns from Al Downham