Warning: This post contains a photo of the graffiti in question, which some may find offensive.

The Ryerson Students’ Union has created a petition asking students to support a request to the university to stop discrimination on campus.

The petition, created on change.org, states that it is “a call to the administration of Ryerson University, as they must take proactive steps to help curb these issues.” It had 165 signatures by noon on Friday.

This move comes after anti-Semitic graffiti was found scribbled on the wall of a third-floor bathroom in the library building on Oct. 16. The hateful message called for “Jews and all their supporters” to “burn in hell.”

The Students Supporting Israel (SSI) at Ryerson and Hillel Ryerson groups released statements on their Facebook pages in the days following the incident.

“This is hate speech in its finest form and we want to reassure all of our members, supporters and the Ryerson community that this isn’t being taken lightly,” the SSI said, while Hillel assured followers that they “will not be intimidated by this repulsive display of hatred towards Israel and the Jewish People.”

“We believe there’s no place for Islamophobia or Anti-Semitism at Ryerson,” said Rebecca Katzman, vice-president students of SSI. “Every student should feel welcomed and safe when they are on campus.”

Dylan Simmons, the president of Hillel Ryerson, said the graffiti shows there’s still a lot of work to be done at Ryerson to combat discrimination.

“It was really heartbreaking when I saw it,” he said, adding that the last time he saw such anti-Semitism on campus was last year, when a group of students working on a project on campus were spat upon, and had the Israeli flag they held spat upon, by another student.

In the week leading up to the federal elections, a Muslim Students’ Association (MSA) poster encouraging students to vote was defaced with a pen, condemning Harper and saying to “blame the Jews” for Canada’s problems.

While the MSA and Idrees were working on a statement, they found out about the second graffiti incident.

“It kind of became a bigger issue than we first thought,” Idrees said. “Students feel like it’s OK to write these violent, anti-semitic comments … that’s not OK.”

The RSU followed the university’s Policy 161 when dealing with the incident, but ran into a problem as “there are no remedies that have been given to students,” she said.

“We’re trying to achieve a better response [with the petition] to when issues like this happen,” she said, pointing to better and more thorough security investigations of such incidents. “[The university] should have the proper repercussions. If somebody does this and nothing happens, what’s stopping them from doing this again?”

President Sheldon Levy released a statement about the matter on Oct. 21, saying the university is working with Toronto Police services to investigate and that “graffiti of this nature is absolutely unacceptable at Ryerson and has no place on our campus or anywhere else.”

According to Levy, this was an isolated incident and security didn’t “find any further hate-related graffiti” in the surrounding washrooms.

Tanya Poppleton, manager of security and emergency services at the university, said security immediately covered up the graffiti and cleaned it a few days later.

Another supporter of the petition is Radwan Al-Nachawati, president of the MSA at Ryerson.

After seeing the graffiti, he said, MSA “reached out to Hillel through the RSU … to offer our support, which was through the proposition of a statement.”

“We don’t accept discrimination for any form of faith. We stand by our Jewish students,” he said. 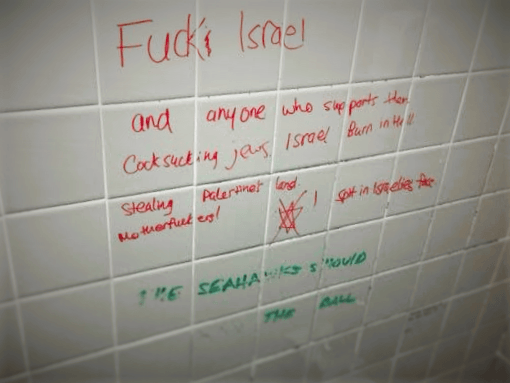 The graffiti found on the third floor of the Library building. Courtesy Facebook/Hillel Ryerson.

Al-Nachawati said he hopes the petition will also lessen the Islamophobia on campus, given recent events such as the discriminatory graffiti on RSU election posters last year as well as an incident last week of a non-community member insulting and chasing two female Muslim students in front of the AMC building.

“We hope that [the petition] allows the university to see that this is a pressing concern on campus for multiple faith groups, and it’s an increasing one as well,” he said. “The safety of our students is most important.”

“I didn’t know about the petition until it showed up in my personal Ryerson email just like the rest of the student body,” she said. “Some members of the group first saw it published on Facebook but SSI was never contacted directly.”

Though on the petition’s page the goal is set at 200 supporters, Idrees said the RSU will “leave this on for about a week” to get as many signatures as possible.

“The people who are signing on are not just  Jewish students,” she said. “I’ve seen everybody on here supporting that this is not OK — it shows that there’s still a big issue on campus against hate speech and discrimination.”

The RSU will host a social justice and committee meeting on Oct. 28, Idrees said, where these recent incidents will be up for discussion.