The LUDIC Arcade was a free event that took place at the SLC from Oct. 21 to Oct. 22.

A Ryerson master of arts student curated a two-day pop-up arcade in hopes of making game culture more accessible to the community for free.

Amanda Wong, who is in her second year of the communication and culture program at Ryerson, has organized the LUDIC Arcade as her master’s thesis.

The LUDIC Arcade was a free event that took place at Ryerson University’s Student Learning Centre (SLC) from Oct. 21 to Oct. 22. It was supported by the Digital Media Experience Lab.

Tukatan, presented by Hexel Donut, is a basic adventure platformer game included in the arcade. The company was founded over the summer by three OCAD students and one Ryerson student with the help of Ryerson’s Transmedia Zone. It is now available on mobile for free on iOS and Android.

“I’m in computer engineering, so I work a lot on hardware, but I wanted to learn programming and I’ve always loved video games. I decided to take a swing at making video games and this is what I’ve come up with,” said Trent Rand, a Ryerson student and one of the founders of the company.

The game is played as a “tukatan” character who each “have their own little personalities,” where users tilt their device back and forth to make the tukatan roll around and tap to make him jump. “It was heavily influenced by stuff like Loco Roco and another [game] called Choose Garden, which was made by another Ryerson student,” Trent said.

First-year business technology management student Alex Scotland originally came to the SLC to study, but stopped by to try out one of the video games. “It was pretty fun,” Scotland said after playing Mount Your Friends by Stegersaurus Software. “I would definitely come back if there was another time that they do this.” 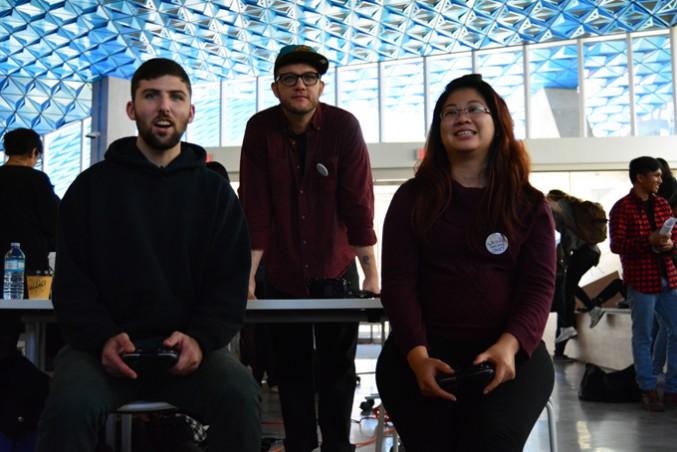 Another game included in the arcade was Asphyx by Droqen, which can be played online for free. The game puts users through various situations where players have to hold their breath in real life when their character is under water. The making of the game took only a week, said the game’s creator, Alexander Martin.

Researcher and master’s student Mathew Iantorno, who had worked with Wong in the past, came to visit the arcade after seeing the event on Facebook. “I think it’s enjoyable. I’d like to try all the games here,” Iantorno said.