JV Mukama jumps for a ball against the Windsor Lancers at the CIS Final 8 last year.

For the Ryerson men’s basketball team, it’s the start of a new era.

Following the 2014-15 season the men’s basketball team finds themselves without seniors Kadeem Green, Jordon Gauthier, Björn Michaelsen and the face of the team for the past four years, Jahmal Jones. In addition to losing those four key seniors head coach Roy Rana will be taking the year off on a sabbatical, as he wishes to spend more time with family.

Last year the team hosted the CIS Final 8 national tournament and won the bronze medal. Now the Rams are training hard to make sure that last season is not a one time deal. With that being said, things will not be as easy for the Rams as player and coaching roles have changed drastically.

Players like Aaron Best, Adika Peter-McNeilly and Jean-Victor “JV” Mukama all find themselves taking on bigger roles. They’re transitioning from young grasshoppers to Yoda’s on a team filled with fresh talent. In practice it is evident that the senior players are accepting the roles. Best is constantly pulling younger teammates aside and explaining offensive schemes and rotations to the newcomers on the team.

“Just being a leader is an important thing,” Best said. “There’s a lot of new guys coming in and we have to make a good example for them.”

In basketball, team chemistry is key; all players are required to have a good feel for each other, whether they’re a senior player or a freshman, the team has to be able to work as a single unit.

It’s clear in practice that the younger players are making a smooth transition and getting along well with the team. Players like Tevaun Kokko, a native of Newmarket, Ont. who just joined the team, is having no trouble fitting in with his new teammates.

“From the very start when I first joined the team, the older guys were very open and nice making my transition really easy,” Kokko said.

Being nice however, will only get the team so far. Being nice will not get the team back to the CIS Final 8 tournament. The Rams will need to show grit and be able to fight back when faced with adversity.

“Right now things are looking good, players are excited and eager to get things started. The team is learning their defensive and offensive sets and building chemistry with one another,” said women’s assistant coach Kareem Griffin as he watches the men’s team practice before his own. “But there will come a time where the Rams are facing a seasoned team like Windsor, Carleton or the University of Ottawa. The team will need to be able to show toughness when things aren’t going their way [and] certain players will need to step up and accept their new role.” 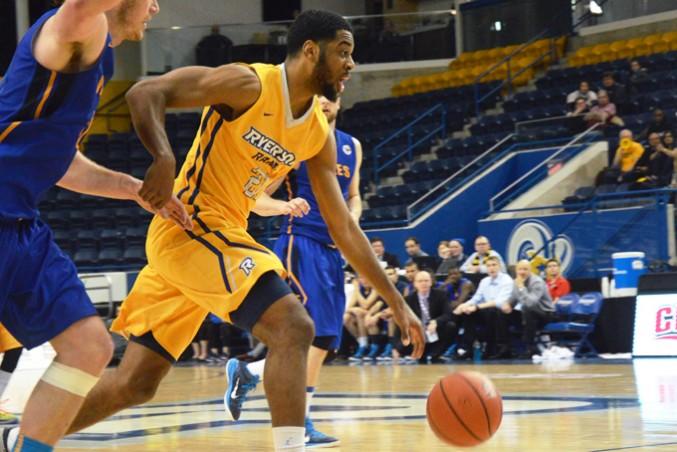 Adika Peter-McNeilly dribbles the ball against the Victoria Vikes at the CIS Final 8. PHOTO: SIERRA BEIN

Players like Best and Mukama will need to accept their new roles as leaders during those times. They will need to be able to control the pace of the game and when faced with adversity they will have to react and bring the team back into the game.

The beginning of the season will be a huge learning period for the Rams, being placed in situations that they weren’t in last year and being expected to make the right decisions.

With the season opening on Nov. 4 at home against the U of T Varsity Blues, the team will continue to work on becoming more intense and focused. The road back to the CIS Final 8 will not be an easy one, however, the team has every intention to make it back. So long as players are ready for their new roles anything is possible for the young and talented Rams team.