In order to help the Ryerson men’s basketball team find success this season, Jean-Victor Mukama knew a leadership role was something he’d have to step into.

The lanky shooting-guard from Hamilton, Ont. who started out playing for Martin Vaillancourt’s UPLAY -— a summer rep basketball program combining academic excellence with top-tier athletes  — is now a  guiding hand on a fresh Rams team.

“Working on chemistry off the court is important to me, because I think the best teams have good chemistry outside of basketball,” Mukama said. “There’s more things I have to be responsible for this season and so I’m trying to figure it out and act upon it.”

“Out of leadership, and personality, there’s no one that’s bigger than him. Everyone wants to be around JV”

Vaillancourt recognized Mukama’s potential leading into high-school, often driving him to and from games. Eventually Villancourt would coach Mukama on his high school team, praising his infectious personality.

“I saw this lanky kid. The kid was just a happy kid having fun, shooting hoops, laughing, giggling,” Vaillancourt said. He was the type of kid that Vaillancourt wanted to have around his high school basketball team.

At that time, he says that Mukama wasn’t up to the level of competition. But Vaillancourt made sure that Mukama was on the team because of his positive attitude.

“We just wanted to keep him around. Out of leadership, and personality, there’s no one that’s bigger than him. Everyone wants to be around JV. Everyone loves JV,” Vaillancourt said.

Mukama worked hard on his game, and according to Vaillancourt, “JV got pretty good.” By Grade 12, he grew to six-foot-six, and still had the perimeter game of a guard. “Now he was starting to make some noise,” Vaillancourt said. “He was a six-foot-six shooting guard who could handle the rock, defend the ball and block shots. He was a super star.”

Filip Vujadinovic, who played against Mukama in high school, and is now his university teammate at Ryerson remembers thinking, “I never get intimidated by people, but I actually got intimidated watching that. Knowing that I had to guard him, I was like ‘Damn, I don’t want this guy to embarrass me.’”

The second time they played against each other, Vujadinovic was injured, so he had to watch Mukama as he, “destroyed my team. It was hard to watch. Everything went in for him.” 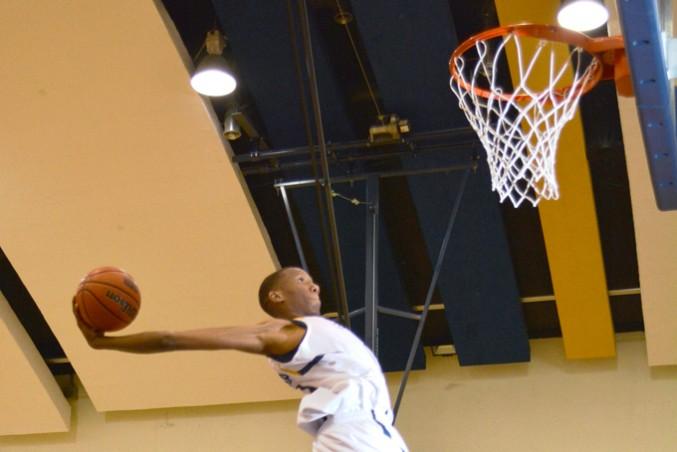 Now in his third year, Mukama has had the advantage of playing under the tutelage of previous veterans Jahmal Jones and Aaron Best. Soaking up as much as he could during his time playing with them, JV said he took parts of their game and tried to work them into his style of play.

“I had a lot of questions about technical things, but it was practising with them, you start to pickup on things without even realizing it,” Mukama said.

At the time, Vujadinovic didn’t know who his soon-to-be teammate was. But, he remembers that he hated playing against him because of his length. Vujadinovic points to Mukama’s seven-foot-five wingspan; noting that in his eyes, he has the most potential on Ryerson’s basketball team.

Mukama’s length is one reason why when the Toronto Raptors’ 2014 draft pick, Bruno Caboclo, practices with the Rams, he’s the one to guard the six-foot-nine Brazilian prospect.

“JV is like a shorter version of him in a way,” Vujadinovic said. “They’d get pretty competitive. Bruno would hit a shot, JV would get pissed off and JV would get in his face.”

When Caboclo comes to practice at Ryerson, Mukama’s teammate thinks that he plays with a chip on his shoulder, knowing that Caboclo’s agent would also be watching. “He wants to prove that he can beat Bruno.”

Mukama’s nickname on the team is “Can Man.” He attributes this to his love of boxing, specifically Adrian Gomez, who uses “Can man” in reference to winning against anyone at any point.

“It’s really, anybody can get it, get beat on any day or game,” Mukama said. “I alway say it before a game to pump myself up.”

Jahmal Jones coined the nickname last year, pointing to the fact that Mukama is a one man wrecking crew in practice when they play one-on-one. Mukama considers the nickname a confidence builder.

New Ryerson recruit JP Kambola tried to play him this year to test the nickname out for himself. “JV beat him so bad, he just hit three after three,” Vujadinovic said.

Mukama has become the poster-boy for  UPLAY, and a leader on an undefeated Ryerson team. For him, playing for the Rams is all about playing as a unit, winning games together, not just as individual players.

“From the fifth player on the bench to the eighth man down, we have guys who can score 30 points,” Mukama said. “But my focus is to be the glue for the team, to build up the focus and get everyone to buy into the system.”